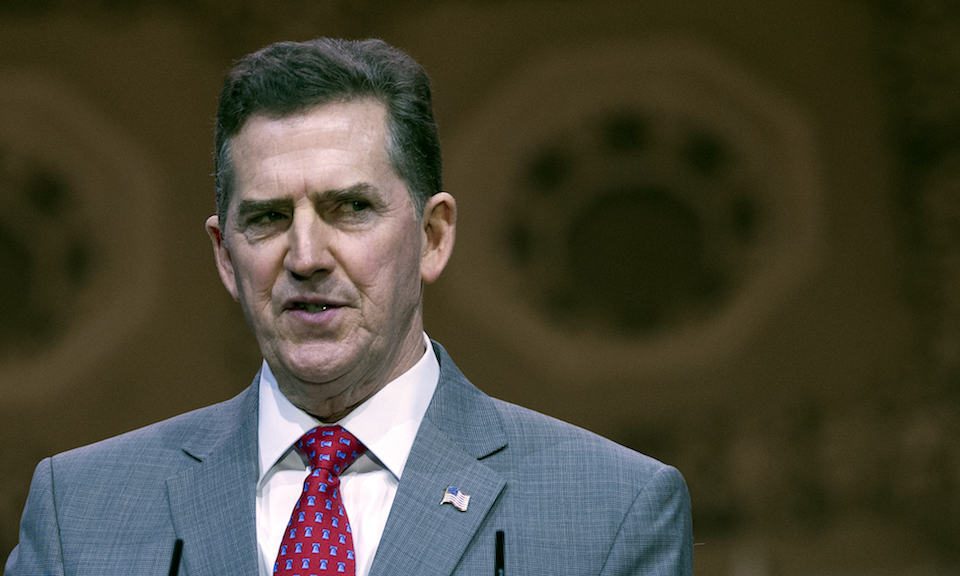 The conservative Heritage Foundation has let go its leader Jim DeMint, shortly after Donald Trump lavished him with praise at the National Rifle Association's annual convention. DeMint is the latest leader of the right, along with Fox's Roger Ailes and Bill O'Reilly, to lose their jobs shortly after Trump's reverse Midas touch.

Jim DeMint has been fired as the head of the conservative Heritage Foundation, only days after Donald Trump praised "all of the people" at the foundation and described DeMint's leadership as "amazing."

The board of trustees held a meeting Tuesday to vote on DeMint's future with the foundation and issued statement that "by a unanimous vote, [the board] has asked for and received the resignation of Jim DeMint as president and CEO of the organization."

The statement goes on to say it was "a difficult and necessary decision," but gave no specific reasons for DeMint's firing.

DeMint is the latest conservative leader to receive a Trump endorsement and then find himself out of a job, suggesting Trump may have a reverse Midas touch. Fox News' Roger Ailes and Bill O'Reilly were both removed from their jobs shortly after Trump offered his public support of them.

Trump personally vouched for Fox News CEO and founder Ailes when multiple allegations of sexual harassment started to surface. Trump said the allegations were "totally unfounded, based on what I read." Less than a week later, Ailes was gone.

Trump stepped up to bat for Fox News host O'Reilly when news broke about a series of secret settlements the network had made to women who accused O'Reilly of sexual harassment over the years. Trump told the New York Times, "I don’t think Bill did anything wrong," and called him "a good person," suggesting O'Reilly should have fought against the women instead of settling.

Just about two weeks later, after a boycott led to a drought of advertisers, Fox announced it was dropping O'Reilly after over 20 years at the network, without even a farewell show.

Despite its track record of intellectually dishonest and inaccurate research, Heritage has been one of the preeminent sources of policy and research for the right and the Republican Party for decades.

CNN described Heritage as "Trump's think tank," highlighting the intellectual influence the group has had over his administration from the start.

In December, Mike Pence gave the keynote speech for the annual meeting of the group's "President's Club," which was held at Trump's hotel in Washington, D.C. Several Heritage fellows were part of the Trump transition, while the group has guided foreign and domestic policy in line with their conservative positions.

The foundation views the Trump presidency as an opportunity to implement "things Heritage has been building support for for years," according to previous comments from DeMint.

In 2009, while DeMint represented South Carolina in the Senate, he infamously said that health care reform would be President Barack Obama's "Waterloo" and would "break him." Obama was re-elected three years after that remark.

DeMint went on to lead Heritage, but according to Politico, some conservatives fault him for making the organization more political than ideological, wedding it even closer to the Republican Party than in the past. Those tensions reportedly led to Mike Needham, of the affiliated Heritage Action, to "throw a chair across the room" after a meeting with DeMint.

Whatever the cause for DeMint's ouster, it again highlights Trump's terrible judgment, valuing personal loyalty and obsequiousness over comptence and intellectual honesty.

Pence: New guidelines could send people exposed to virus back to work