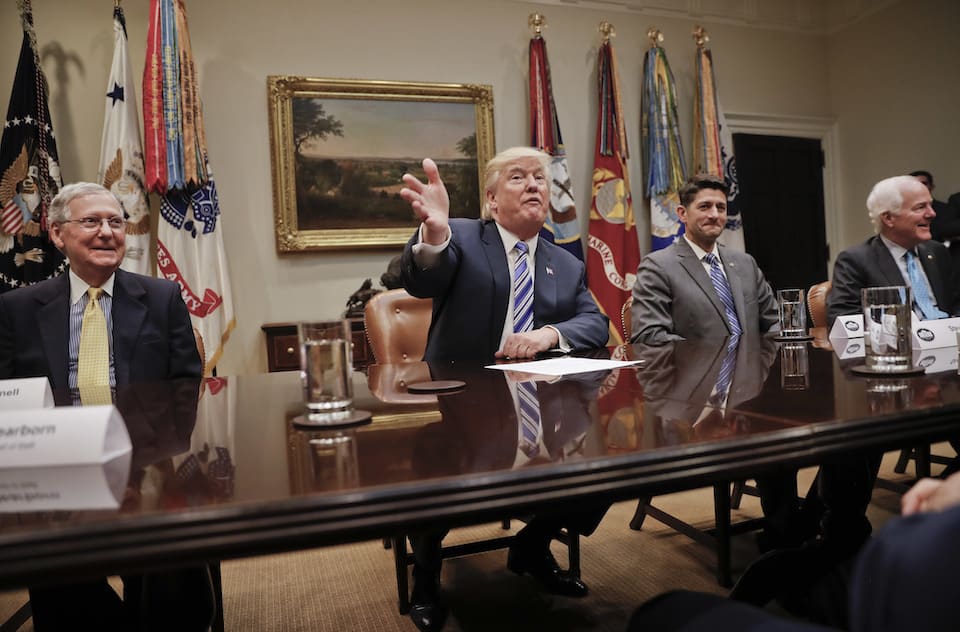 Despite loudly insisting Roy Moore should drop out of the Alabama Senate race, most Republican senators remain mum after Trump endorsed the alleged child molester.

Republican leaders have largely gone silent in the wake of Donald Trump's stunning decision on Tuesday to endorse an alleged child molester, Roy Moore, in the Alabama Senate race.

Never dreaming that Trump, who has been accused of sexual harassment and assault by more than a dozen women, would endorse Moore after a floodgate of allegations emerged about his habit of trolling teen girls in shopping malls, many Republican senators had already publicly suggested Moore get out of the race.

Senate Majority Leader Mitch McConnell of Kentucky said Moore "should step aside" from his Senate bid because of the accusations. "I believe the women." Speaker of the House Paul Ryan of Wisconsin agreed.

And that was just the beginning.

“I believe the individuals speaking out against Roy Moore spoke with courage and truth, proving he is unfit to serve in the United States Senate and he should not run for office,” stressed Colorado Sen. Cory Gardner, who serves as chairman of the National Republican Senatorial Committee. “If he refuses to withdraw and wins, the Senate should vote to expel him, because he does not meet the ethical and moral requirements of the United States Senate.”

In all, more than a dozen of the 52 Republicans in the Senate said Moore should pull out of the Senate race in Alabama. In terms of messaging, the GOP thought this was a done deal: Moore was unfit and the national Republican Party wanted nothing to do with him.

And then Trump blew it up. Following the Steven Bannon/Breitbart wing into the moral abyss, Trump made it clear it's more important to elect a Republican to the Senate — even if that Republican has been accused of sexually molesting a 14-year-old-girl while he was in his 30s, and even if that Republican was reportedly banned for a local shopping mall because of his love of cruising young girls there.

Trump made plain on Tuesday that there is no ethical or common decency standard he will adhere to. None. And now, once again, Republican leaders, especially those in the Senate, watch silently from the sidelines, afraid to speak up.

The New York Times reported that "Senate Republicans said on Tuesday that they were bewildered by Mr. Trump’s weighing in on the Alabama race." But the Times didn't actually quote any Senate Republicans saying that, because apparently few if any have the guts to now state that fact on the record.

While several Republican senators were already on the record saying Moore should bow out of the race, that sensible position is now diametrically opposed to Trump's. But apparently none of the senators want to draw attention to that.

Note that a strong majority of Americans — 60 percent — think Moore should be expelled from the Senate if he wins the election in Alabama, including a clear plurality of Republican voters (49-33), according to a new Quinnipiac poll.

Trump has now forever tied the GOP to Moore.

6 former EPA chiefs call for agency to return to protecting people and the...