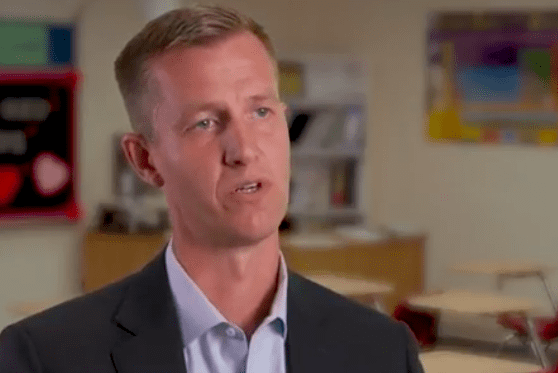 Dale Kooyenga campaign
Get The American Independent in your inbox

Wisconsin students are still paying the price for what Dale Kooyenga and his fellow Republicans did to them.

Wisconsin state Rep. Dale Kooyenga is already under fire for denying clear video evidence that he was drunk on the job — and now he's misleading voters about the harmful spending cuts that he and other Republicans have made to education.

During a recent debate with Democrat Julie Henszey, his opponent for an open state Senate seat, Kooyenga claimed that "there has not been a cut to education" since he has been on the Joint Finance Committee, which writes the state budget.

"After recent reports of Rep. Kooyenga drinking on the job, it’s possible he just has a hazy memory of his votes to cut school funding," SSDC executive director Jenni Dye said. "If Kooyenga can’t remember his own votes to cut funding from local schools and UW campuses, how can we trust him to make the right decisions moving forward?"

Kooyenga excused his lie by claiming he was only referring to K-12 education.

But the SSDC notes that in 2017, "[Kooyenga] voted to cut $10 million from K-12 schools and shift $30 million in school costs onto property taxpayers."

And when Kooyenga has personally voted to cut $316 million from higher education, it's incredibly misleading to claim he hasn't overseen any education cuts at all.

Kooyenga also disingenuously claimed that his fellow Republicans haven't cut the state's education budget since 2011, when he insists they were forced to make cuts in order to balance the budget.

And while K-12 spending has increased since then, the SSDC points out that state general aid funding for public schools is still lower than it was in the 2010-2011 school year.

That means Wisconsin students are still paying the price for what Republicans did to them — and what Dale Kooyenga, who is still the vice-chair of the committee that writes the state budget, did to them.

It's no wonder that the conservative Koch brothers have helped to bankroll Kooyenga's campaign. He has promoted tax breaks for extraordinarily wealthy people like the Kochs, while working to undermine education and hurt Wisconsin families.

Kooyenga's dishonest claim on education is just one of several controversies haunting the Republican. He is on the hook for $30,000 after inappropriately removing an anti-Trump sign from the Capitol, and accusations that he once legislated while drunk are backed up by video that shows him slurring words on the floor in 2015.

Given Kooyenga's willingness to mislead, and his often questionable judgment on the job, Wisconsin voters might think twice about promoting him to higher office.