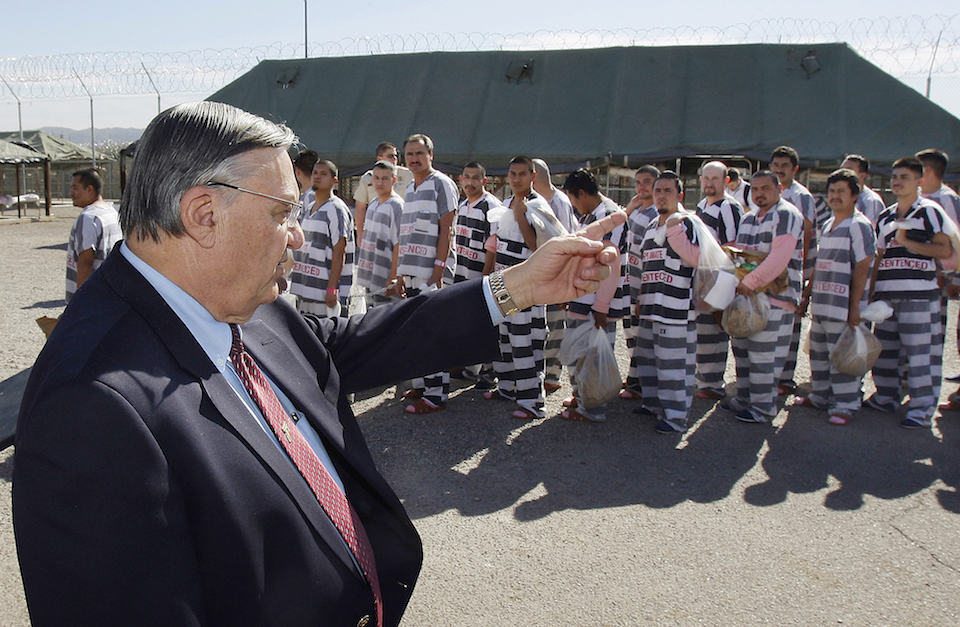 (AP Photo/Ross D. Franklin, File)
Get The American Independent in your inbox

After more than two decades, the brutal detention center used by former Maricopa County Sheriff Joe Arpaio to torture county prisoners and immigrants is being shut down.

One of the silver linings of the 2016 election was the defeat of Maricopa County Sheriff Joe Arpaio.

The six-term Arizona Republican law enforcement chief — a mutual admirer of Donald Trump — spent his career careening from one controversy to the next. He put women in chain gangs, called President Obama's birth certificate a "fraudulently created document," gathered a volunteer "posse" to round up undocumented immigrants, and currently faces trial for contempt of court after ignoring a judge's order to end racial profiling.

In 2016, the people of Maricopa County finally got tired of him and voted him out. But Arpaio left behind a monument to his sordid career: the infamous prison known as Tent City.

Built by Arpaio in 1993 to relieve prison overcrowding, Tent City is an open-air detention center in the Arizona desert just south of downtown Phoenix — quite literally just a collection of tents surrounded by an electric fence. Most of the inmates are pretrial and have not been convicted of an offense, and yet they have been subjected to some of the most brutal human rights abuses in the entire U.S. correctional system.

Under Arpaio, Tent City inmates were dressed in cartoon-style black-and-white uniforms with pink underwear, ostensibly to discourage uniform theft. They were fed reclaimed scraps from restaurants; Arpaio actually bragged, "I feed the dogs better than the inmates." They slept outside in desert temperatures with no air conditioning. One week in the summer of 2003, the tents got hotter than 130 degrees, forcing inmates to strip down to their pink underwear.

The facility was perpetually understaffed and so crime-ridden that one Phoenix attorney called it "the largest open-air drug market in the western United States ... people just throw them over the wire fence." Arpaio even set up tours for the general public to come look at the inmates like they were a zoo exhibit.

Tent City also had a serious problem with racism. In 2009, Arpaio set aside one section of the facility just to hold undocumented immigrants, which he bizarrely claimed was a cost-saving measure. In 2011, a Justice Department report found Arpaio's correctional officers systematically abused Hispanic inmates, shouting racial slurs and putting people in lockdown for not speaking English.

But on Tuesday, in a massive victory for human rights, Arpaio's successor, Democratic ex-police sergeant Paul Penzone, announced in a press conference that he will be closing the facility:

Under Penzone's plan, at least half of the detainees in Tent City will be moved to other facilities within 60 days. The remainder, including those in work-release programs, will be transferred over the next several months.

The closure of Tent City is a welcome reform in a county where law enforcement had become synonymous with racial terror. In spite of the darkness and division Trump has fostered on the national stage, Maricopa County shines as an example of healing and hope.