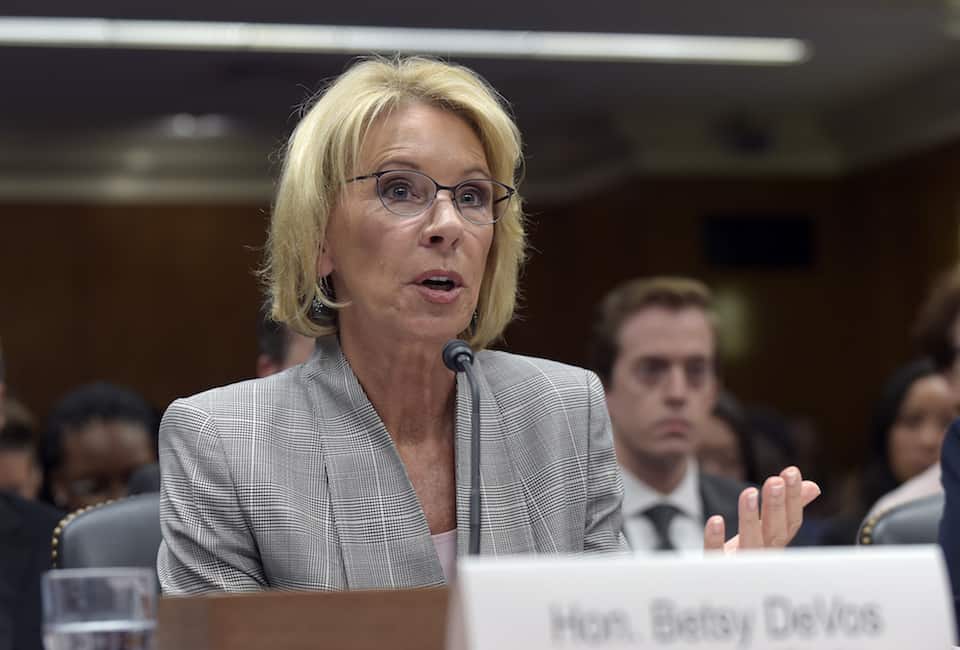 America's schools should be safe for all students. When Betsy DeVos refused to commit the Department of Education to that priority, Sen. Jeff Merkley held her feet to the fire.

Education Secretary Betsy Devos is not good for education in America. Her positions come as no surprise to anyone who believes in public education. We are braced for the worst.

But that doesn't mean a single day can go by when her policies are not documented and resisted.

Sen. Jeff Merkley (D-OR) demonstrated how to do just that at Tuesday's Senate Appropriations subcommittee hearing.

Devos made clear at a recent Congressional Budget Committee that she prioritized "state flexibility" over children's civil rights. So Merkley was ready to hold her accountable.

Straight out of the gates, Merkley stated that it was not enough to merely affirm that schools that receive federal money must "follow federal law." As he explained, those laws are "somewhat foggy in that area."

So he asked for greater clarity:

I want to be absolutely clear about what you're saying. Are you saying that if you have a private school, which generally set their own admission policies, that they will not be allowed under your program to discriminate against LGBTQ students?

But DeVos returned again and again to the talking point that "schools that receive federal funds must follow federal law," refusing to commit to protecting students from discrimination where the law is less clear. Instead, she gave children and parents who are worried about her policies greater cause for concern: "On areas where the law is unsettled," she said, "the department is not going to be issuing decrees."

No decrees. No protections. If you're an LGBTQ kid, you're on your own.

Merkley went on to make the severity of Devos's testimony plain.

MERKLEY: Does your program ban such discrimination in any form?

DEVOS: What program are you talking about?

MERKLEY: Your charter school and your private school grant program.

DEVOS: As I've said before and let me say it again, schools that receive federal funds needs to follow federal law. Period.

MERKLEY: You're saying same thing 10 times and you're not answering the question.

As Merkley stated via Twitter immediately following his questioning, "I tried to get DeVos to say the Department of Education wouldn't allow private schools getting vouchers to discriminate. She refused."