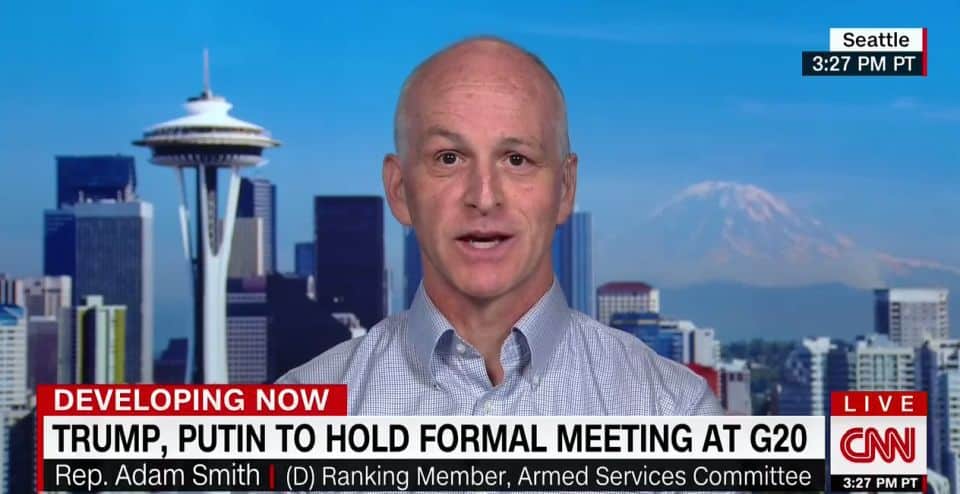 Donald Trump has taken a much tougher stance on CNN than he has on the country that interfered in our election and props up dictatorships around the world — and Democratic Rep. Adam Smith is calling him out for it.

Donald Trump has essentially declared war on CNN, while showing incredible weakness toward Russia, even as intelligence agencies have highlighted their role in meddling in America's elections.

And Washington's Rep. Adam Smith, the ranking Democrat on the House Armed Services Committee, is calling him out for it.

"I wish he treated Vladimir Putin more like he treats CNN," Smith said during an appearance on that very network. "It's not just the U.S. elections that the Russians have hacked into and influenced and manipulated," he added. "They've been doing it for quite sometime."

Smith's comments came in a preview of Trump's meeting with Putin, ahead of which Russia is demanding that properties confiscated as punishment for its election behavior be returned.

Trump aides are reportedly concerned that he will go to Putin on bended knee, and the early signs are not promising. In a press conference with the President of Poland, Trump again refused to back up the intelligence agencies he is in charge of, instead insisting that election interference "could have been other people in other countries." The deflection is straight out of the Putin playbook.

Smith further noted that Putin's actions " borders on an act of war," and that America has not been the only target of Russia's disinformation campaigns which seek to " make the world safe for autocratic dictatorships."

KEILAR: The same day that President Trump leaves for Europe and this big meeting that he has with Russian president, Vladimir Putin, at the G20 summit in Germany. We now know that their first face to face encounter is going to be a formal sit down, not just an informal pull aside and we're going to talk more about that now with congressman Adam Smith of Washington. back with us now, he's the top Democrat on the House Armed Services Committee.

We know, Congressman, that the president has requested of his staff to give him some options that he can have at his disposal when he goes into this meeting, and part of that is possible concessions. These facilities, these compounds that were taken away from the Russians by the Obama administration sanctions, what kind of message does it send that the Trump administration is preparing what are really possible carrots for Russia?

SMITH: A very bad one. Putin takes advantage of weakness, and it's very ironic that for someone with as much bluster as Donald Trump throws around every day, certainly I guess I wish he treated Vladimir Putin more like he treats CNN, was more willing to stand up to a world leader who is threatening democracy and undermining countries all across the globe, because it's not just the U.S. elections that the Russians have hacked into and influenced and manipulated. They've been doing it for quite sometime. They run disinformation campaigns. They use very low-cost options, cyberattacks, disinformation.

They don't have a very strong military. But what they do have, is they've decided to use these lower cost technology options to influence things. And it's very clear what Putin is trying to do. He's trying to make the world safe for autocratic dictatorships. That's what he believes in. That's what he wants to keep in Russia and that's what he wants to spread. And he wants to undermine liberal democracy every place he can. And the only realistic option for us is to counter that. And to the extent we let Putin get away with it, he's going to keep doing it. It's just like in the Ukraine. We have not given the Ukraine I think the level of support that I think we should have, to raise the cost for Putin's interference there. We need to up our efforts to counter their counter-information campaigns. We need to be very clear what Putin is doing is unacceptable. It borders on an act of war the way they've been treating us. And to offer concessions is simply going to encourage him to continue. We need to push back.

As Smith highlighted, the Trump administration has been merciless to CNN for covering stories that make him and his supporters look bad, even as CNN has stocked its roster with multiple pro-Trump voices that diminish the network's credibility.

Trump has made CNN his sworn enemy, while turning a blind eye to the undemocratic actions of his would-be benefactor Putin — even when the men and women sworn to protect America keep telling him information he doesn't want to hear.