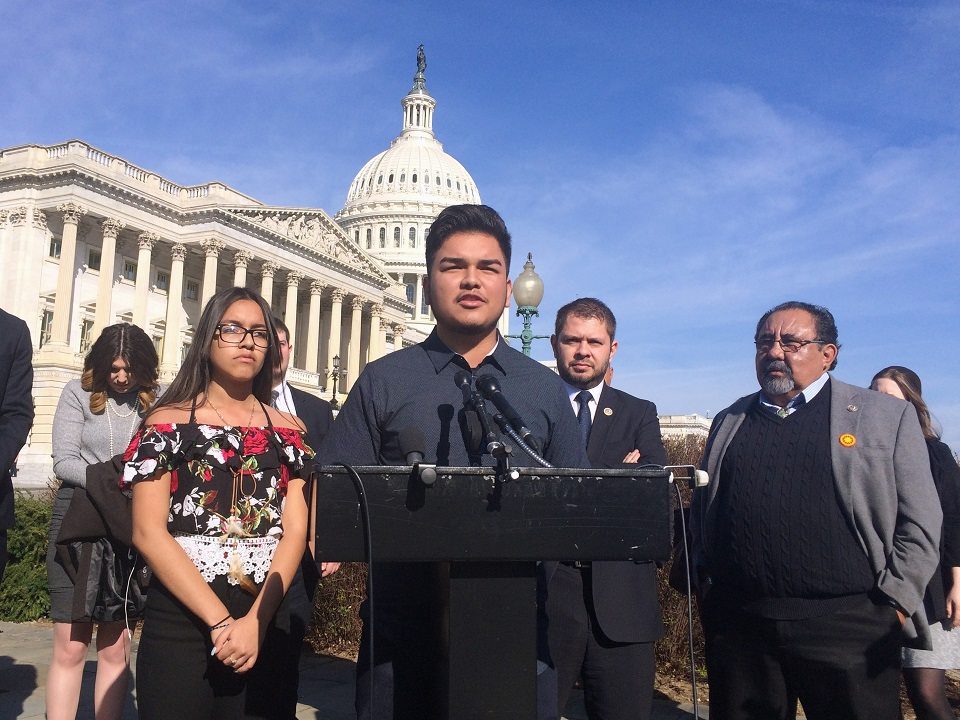 Democratic officials will be accompanied by guests who showcase American inclusivity and diversity. Melania Trump will be joined by three family members of Americans killed by undocumented immigrants.

Despite initial insistence that he would unite the nation as president, Donald Trump's callous immigration policies are already tearing families apart, causing harm and disruption to people's lives and to the country as a whole.

Now he plans to use his first address to Congress as an opportunity for a transparent political move, designed to impugn undocumented immigrants and demonize the entirety of that group with the crimes of a few:

Three relatives of Americans killed by immigrants living in the United States illegally will attend President Trump’s first address before Congress on Tuesday, signaling his plans to showcase his administration’s early efforts to crack down on immigration as a security issue.

Jamiel Shaw Sr., whose 17-year-old son was shot and killed in 2008 by a man who was in the country illegally, will be among the six guests sitting with the first lady, Melania Trump, during the speech.

Mrs. Trump will also be joined by Jessica Davis and Susan Oliver, the wives of two California police officers who were killed in the line of duty by a Mexican immigrant who was also in the country illegally. The officers, Michael Davis Jr. and Danny Oliver, were shot and killed in 2014.

The New York Times notes, "The president’s guests at a joint session of Congress are typically reflective of the administration’s priorities." In Trump's case, those priorities include demonizing undocumented immigrants in order to justify his expanded deportation guidelines and insistence on a budget-busting wall between the U.S. and Mexico.

In stark contrast, Democratic members of Congress will offer their guest seats to an array of people who embody American identities at risk under the Trump administration.

Arizona Democratic Representatives Ruben Gallego and Raul Grijalva will be accompanied by the teenage children of Guadalupe Garcia de Rayos, an undocumented immigrant who had lived in the United States for nearly 20 years, and who was detained and deported in early February after she voluntarily appeared for a routine immigration check-in.

And in a statement, the Congressional Hispanic Caucus noted other guests who "represent communities that have been impacted by the Trump Administration’s draconian and reckless policies," including Areej Ali, a Sudanese green card holder who will be a guest of Representative Norma J. Torres (D-CA); Eliel Aguillon, a DACA recipient and guest of Representative Lou Correa (D-CA); and Fidaa Rashid, an immigration attorney and the daughter of Palestinian refugees, who will accompany Representative Luis Gutierrez (D-IL).

Senator Catherine Cortez Masto (D-NV) will be joined by Astrid Silva, a DREAMer and immigration reform advocate, and Representative Ruben J. Kihuen (D-NV) will bring as a guest Dr. Zia Khan, a Muslim American and leading cardiologist who was born in India and came to the United States to pursue his medical degree.

Senator Patty Murray (D-WA) announced in a statement that she will have as her guests Marci Owens, a 17 year-old transgender girl, once known as the "Obamacare Kid" who is now a health care and LGBTQ rights activist, and Danni Askini, co-founder and Executive Director of Gender Justice League and Trans Pride Seattle.

And a statement from Representative Jerrold Nadler (D-NY) includes more guests from all walks of life: Martin Batalla Vidal, a DACA recipient and a guest of Nadler's; Jeannine L. Chartier, a disabilities advocate who will accompany Representative David Cicilline (D-RI); Aneelah Afzali, founder of the American Muslim Empowerment Network, a guest of Representative Pramilia Jayapal (D-WA); and many others.

In the face of cruel new policies emanating from the Trump administration on a seemingly daily basis — policies which do absolutely nothing to "unite" the country, but rather seek to sow further division and enmity — Democrats are upholding their party's values of inclusion, compassion, and an ever-broadening definition of America.

And by giving prominent placement in Trump's presence to real people who have been, and continue to be, harmed by this administration, Democrats prove that they are still ready and able to bring the fight to Trump, on behalf of those whom he continues to attack.