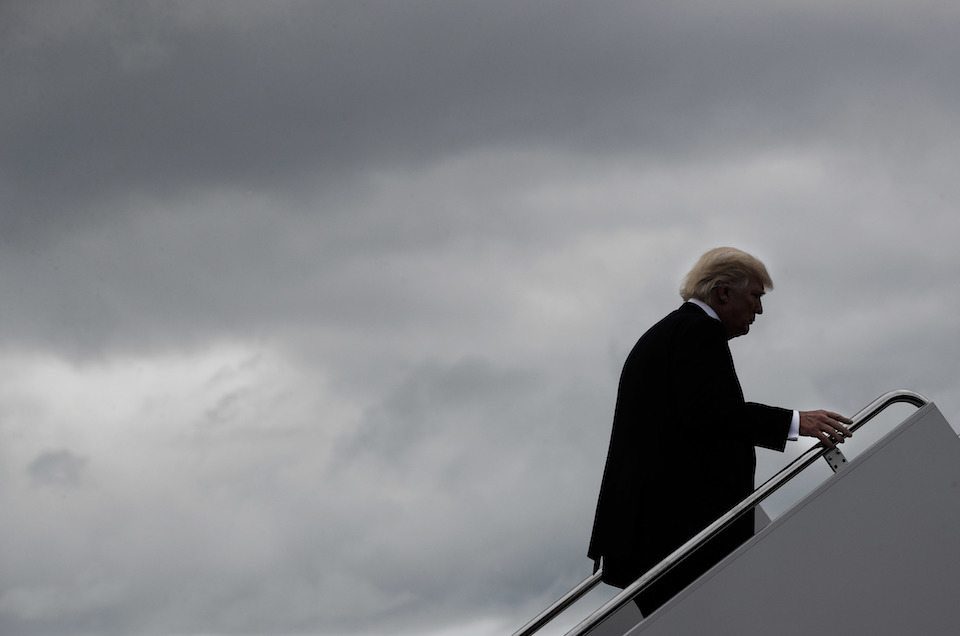 Donald Trump is skipping the Kennedy Center Honors, claiming that his presence would be a "distraction" — a convenient euphemism for everyone hating him.

Donald Trump has faced one endless nightmare of a week after refusing to condemn white supremacy in Charlottesville.

His advisers have resigned in droves. He has been condemned by members of his own party, business leaders, and faith leaders. And charities are pulling out of fundraisers at Trump's Mar-a-Lago country club.

And now he's going into hiding.

Trump has announced that he and his wife, Melania, will not be attending the Kennedy Center Honors in December, an annual event which traditionally hosts the president and First Lady. The Obamas were mainstays at the ceremony.

Speaking to reporters, White House press secretary Sarah Huckabee Sanders said Trump was declining the invitation "to allow the honorees to celebrate without any political distraction" — which is a handy euphemism, and a transparent way to obscure the fact that many of the honorees are boycotting the White House reception.

This is not the first time Trump has run away from traditional public appearances.

In February, Trump announced on Twitter that he would be blowing off the annual White House Correspondent's Association dinner, which usually features a comedy roast of the president.

More generally, Trump has hidden not just from public appearances but the basic duties of office.

Trump hates diplomatic trips abroad and tried to arrange to cut his most recent one from nine days to five. Meanwhile, as of July, he had spent one-fifth of his entire presidency at golf courses, many of which are owned by his family.

The decision to skip the Kennedy Center Honors may well have been motivated by Trump's fear of confronting public outrage over Charlottesville. But it is not out of character for a president who, at every turn, has proven himself too lazy and too disinterested to make himself available and visible to the nation.

America deserves a president who respects us enough, and is respected enough, to make the basic gesture of appearing publicly. Trump's decision to hide even from this celebratory evening is yet more proof that he cannot be, nor wishes to be, that kind of president.