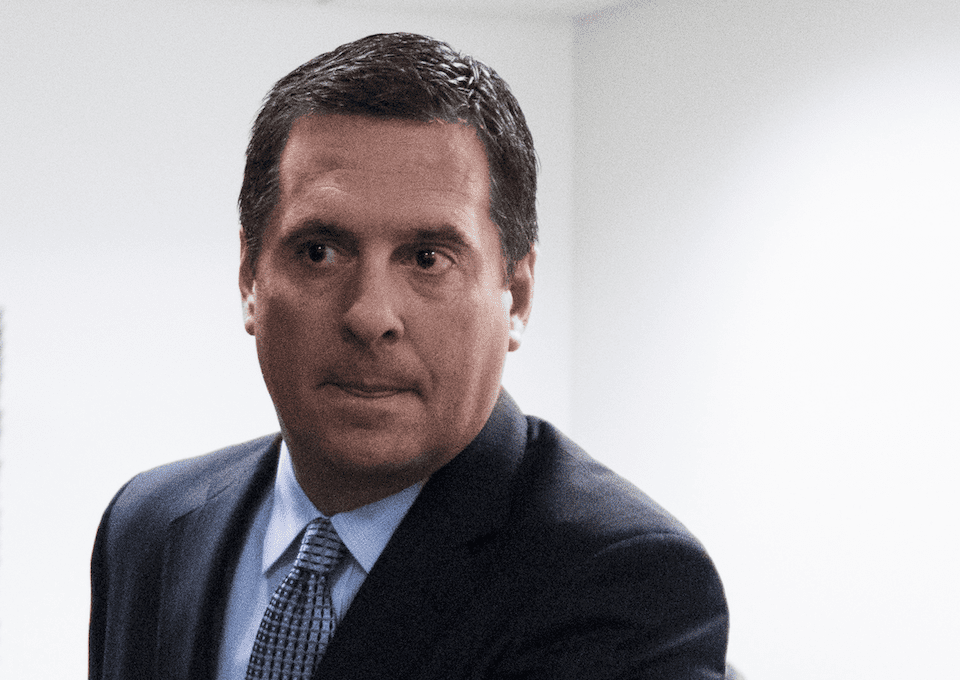 Rep. Devin Nunes (R-CA) isn't exactly known for being in touch with the needs of his constituents, but this week he proved just how far out of touch he really is — and how little he cares about it.

According to the Fresno Bee, police were called to Nunes' central valley office and the building was locked on Tuesday as his constituents outside held a rally in support of Medicare, Medicaid, and Social Security.

Local residents have reportedly gathered outside of his home office every Tuesday demanding that Nunes make an appearance, to no avail.

Nunes has not held a single real, publicly open town hall since 2010, so his constituents' demands aren't exactly unreasonable.

But this week, office staff "called Clovis police on the protesters and kicked members of the media and the public out of the building and locked the door," the Fresno Bee reports.

On Twitter, one woman posted a photo of a police officer outside Nunes' office building, saying that she and the others gathered outside were trying to "see if anyone was available in [Devin Nunes] office," but that "staff called the police and kicked me out."

Myself and others tried to see if anyone was available in @DevinNunes office, where a rally is being held outside. Front office staff called the police and kicked me out. pic.twitter.com/dzJR3c5Mnn

According to Nunes' constituents, office staff actually called 9-1-1 to summon the local police — a move that was slammed by his opponent, Democrat Andrew Janz, as an abuse of emergency services.

"Nunes’ people keep calling the police wasting law enforcement resources. This is not what 911 was designed for," Janz wrote in a tweet Tuesday. He also thanked the local Clovis Police Department for "keeping the peace and allowing demonstrators to exercise their 1st Amendment rights."

In a another tweet, Janz posted footage saying he was "LIVE outside Devin Nunes' district office," where he joined the protesters in calling for Nunes to show his face.

Nunes' constituents have never been shy about expressing their anger over Nunes' poor performance as a representative of California's 22nd Congressional District, and the protesters gathered outside Tuesday were no exception.

In addition to showing their support for social programs that Nunes opposes, constituents were also protesting his abuse of his position as chair of the House Intelligence Committee, which he has used to obstruct the Russia probe and shield Trump from scrutiny — as Nunes recently admitted at a private fundraising event for a fellow California Republican.

"Nunes is a puppet for Trump," said Gene Roza of the California Alliance for Retired Americans.

She told the Fresno Bee that, like the others gathered outside of Nunes' office, all she wants is to get him to communicate with his constituents, or elect someone else who will. "Our goal is to get people that are going to represent the greater majority, that actually talk to us," Roza said.

Instead of standing up for issues that are important to California voters, Nunes got to Congress and promptly laid down as a doormat for Trump.

In his effort to shield Trump from scrutiny by undermining the Russia investigation, Nunes has put so much energy into being Trump's "errand boy" that he left his voters behind and lost touch with their needs, if he was ever even in touch with them in the first place.

Nunes is so unpopular with voters in his home district that he has resorted to desperate fundraising pitches on the other side of the country. He also tried to present himself as a farmer to come across as more down-to-earth, but he ended up getting sued by his constituents — many of whom are actual farmers — for misrepresenting his occupation.

It’s no surprise that Nunes’ poll numbers are plunging and his seat in Congress is no longer considered ‘safe’ by election forecasters. But instead of facing the voters he has ignored for years, he's hiding behind police and continuing to neglect the people he was elected to serve.

And since he's not going to do his job, his constituents are making it clear that they're ready to find someone who will.