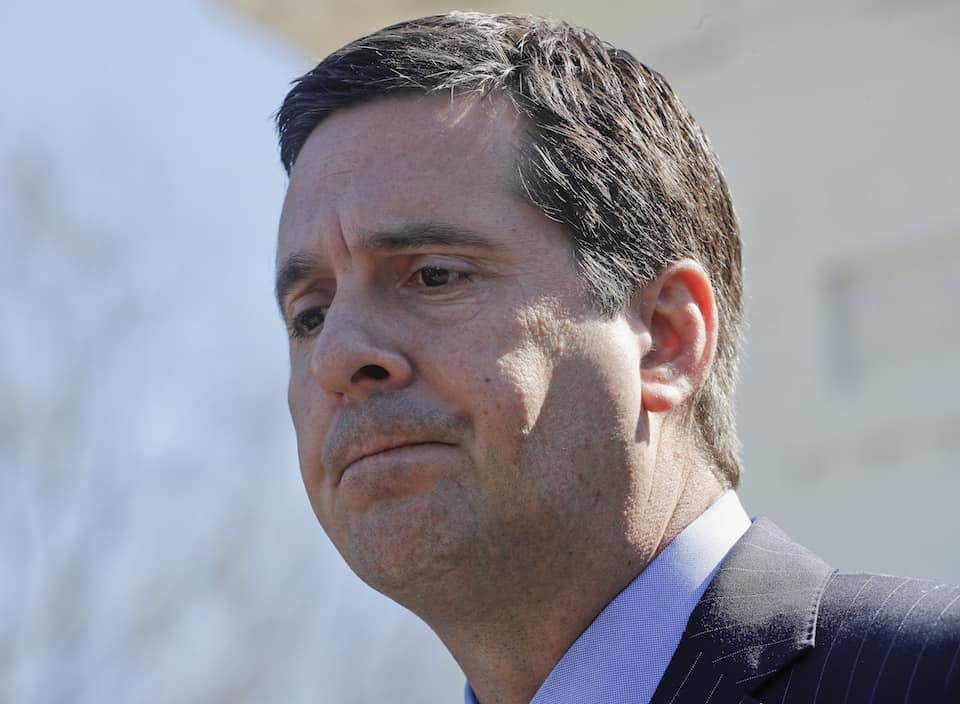 Senior FBI and intelligence officials are warning that Devin Nunes' demand for documents related to the Russia probe endangers the lives of confidential sources.

The warning comes as Nunes continues to demand more access to confidential records related to Mueller's investigation. Such records are usually kept tightly sealed because exposing them could tip off the targets of investigation or accidentally implicate innocent people who have gotten swept up in the probe.

In some cases, disclosing sensitive information from an investigation puts the identities — and lives — of confidential sources at risk. That's exactly why senior intelligence officials are warning that Nunes' latest demand for the Justice Department to hand over documents from the Mueller probe is so dangerous.

According to the Washington Post, top officials from the U.S. intelligence community warned the White House last week that the documents Nunes is seeking could risk lives by exposing the source of the information, who is described as "a U.S. citizen who has provided intelligence to the CIA and FBI."

Furthermore, by exposing the identity of the source, Nunes' reckless stunt threatens to harm relations between the U.S. and "other countries that serve as U.S. intelligence partners," officials told the Post:

….For the intelligence agencies, Nunes’s request threatened to cross a red line of compromising sources and methods of U.S. intelligence-gathering, according to people familiar with their views. Intelligence officials fear that providing even a redacted version of the information Nunes seeks could expose that person and damage relationships with other countries that serve as U.S. intelligence partners.

Nunes and his Republican colleagues on the House Intelligence Committee have since claimed that the demand for documents did not pertain to a specific individual.

But according to CNN, which reviewed a non-classified appendix to the subpoena for information, Nunes is seeking "all documents referring or related to the individual" identified as a U.S. intelligence source.

Despite these dire warnings that releasing the documents could endanger a source and compromise an ongoing investigation, Republicans are still moving forward with their demand to access the confidential information.

"We are entitled to it," Rep. Peter King of New York told CNN on Wednesday.

Other Republicans, like Rep. Tom Rooney, say the concerns are unfounded because no one on the House Intelligence Committee would leak such information — despite the fact that Nunes, who chairs the committee, has done exactly that.

In his effort to shield Trump and obstruct the Russia investigation, Nunes has shown that he is willing to leak confidential information, distort classified intelligence before publicly releasing it, collude with the Trump White House, and then lie about it when caught.

At one point, Nunes even reportedly leaked text messages from the top Democrat on the Senate Intelligence Committee to Fox News.

Now, Nunes and his Republican colleagues are trying to force the DOJ to show them confidential documents revealing sensitive information about Mueller's Russia investigation — and it appears they have succeeded.

CNN reported on Wednesday evening that Nunes and fellow Republican Trey Gowdy had been granted access to a secret briefing during which they will get to view the classified intelligence. This will conveniently allow Nunes to see insider information about the Russia probe, which he can then relay back to Trump — as he has done before.

If that involves endangering the lives of U.S. intelligence sources, that is a risk Nunes is apparently willing to take. And he's not alone: On Tuesday, Speaker Paul Ryan signed off on the whole scheme.