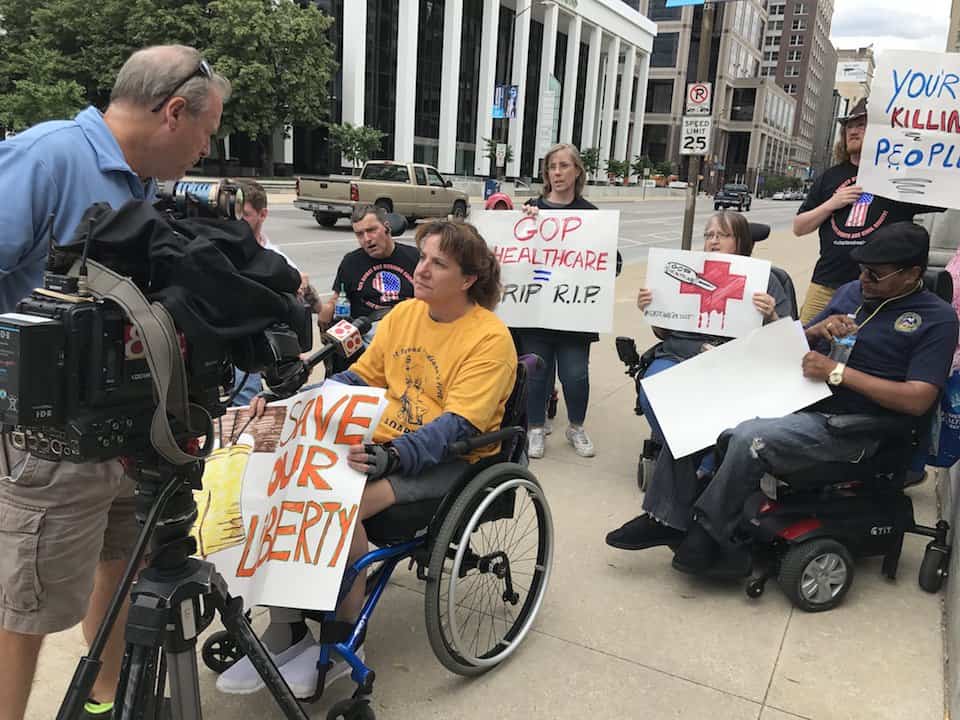 ADAPT
Get The American Independent in your inbox

When members of the grassroots disability rights organization ADAPT went to Indiana Republican Sen. Todd Young's office to protest the GOP's health care repeal, they were forcefully accosted by police.

The Republicans' health care bill would do drastic damage to Medicaid, and visit grievous harm on millions of Americans, including those with disabilities.

When activists with the grassroots disability rights organization ADAPT showed up to Majority Leader Mitch McConnell's office, they were physically and violently removed by security, with some of them even dragged out of their wheelchairs, and arrested.

And when ADAPT activists converged on Indiana Republican Sen. Todd Young's office, to demand that he vote against the repeal plan and its proposed cuts to Medicaid, they were again met with hostility and physical aggression.

Disability activist Stephanie Woodward noted that an ambulance was on site to attend to injuries inflicted by the harsh treatment of the protestors.

ADAPT documented the scene on the national organization's Twitter account, where they stated that protestors were forced out of Young's office, and that police officers dragged one activist so forcefully that she re-injured her knee.

Many of the images and reports were deeply troubling:

Leader of protest at @SenToddYoung 's office taken in ambulance. Group claims police knocked her into wall. She was inside the building. pic.twitter.com/WI3fbSAdWt

But the activists were undeterred, proving that no matter what the Republicans say or do — or don't say or do, as the case may be — they will not be silenced, and they will not go away.

Leslie of Indiana ADAPT being interviewed by CBS on why Medicaid matters. #adaptandresist pic.twitter.com/jDWFArauOA

When President Barack Obama blasted the GOP's repeal plan for its "fundamental meanness," he was exactly right — and sadly, each day in this ongoing debacle only proves his point more.

Organizations like ADAPT are going to keep reminding the nation what is truly at stake, putting their own bodies on the line to do so.

Trump's dream of a packed GOP convention is falling apart