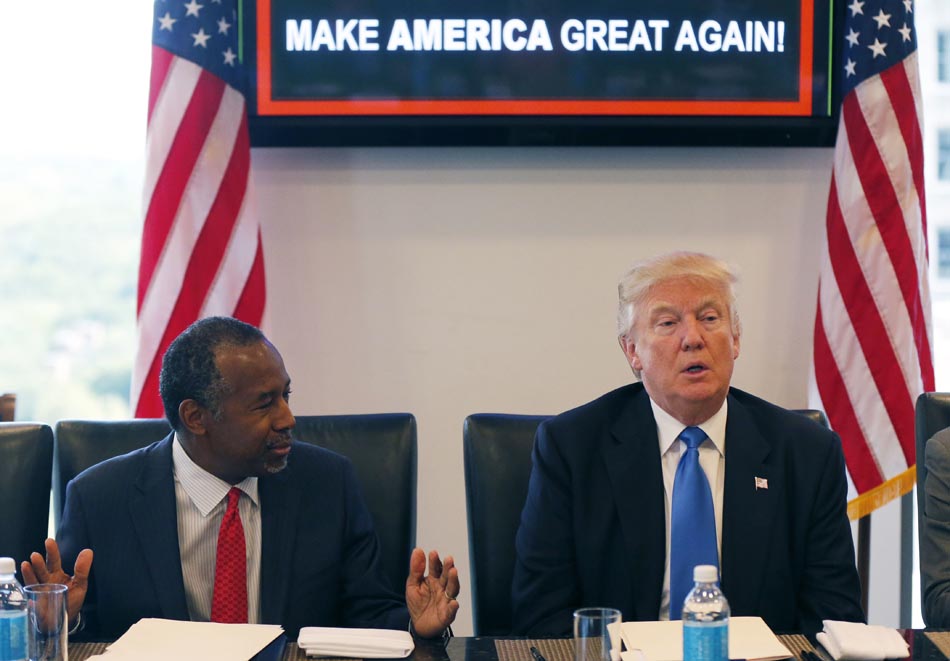 Ben Carson and David Bossie bring the total of positive cases in Trump's inner circle to at least 39.

At least eight people in Donald Trump's orbit have tested positive for the coronavirus recently, the third outbreak tied to the White House in just over a month.

Ben Carson, secretary of Housing and Urban Development, tested positive for the virus on Monday morning, his office confirmed. "He is in good spirits and feels fortunate to have access to effective therapeutics which aid and markedly speed his recovery," a spokesperson told NPR.

"I really came down with symptoms yesterday. Fever of 101. Chills. Muscle cramps. Respiratory issues and fatigue," Carson told the Washington Post that same day. He claimed he had contracted the virus "probably somewhere, out there in the universe."

"I was on a bus tour last week," he said. "I was at the White House on election night, so there are multiple possibilities."

David Bossie, the Trump campaign adviser leading the legal battles to contest the presidential election, also tested positive for the virus on Sunday at the White House, according to Bloomberg.

Carson and Bossie were both at an Election Night party at the White House East Room last Tuesday with no one social distancing and few wearing masks.

In September, Trump held a ceremony at the White House Rose Garden to announce the nomination of Supreme Court Justice Amy Coney Barrett. Dr. Anthony Fauci, director of the National Institute of Allergy and Infectious Diseases, called it a "superspreader event," as the crowd was largely unmasked with minimal social distancing.

The infections marked the first major outbreak tied to the White House. Trump himself became infected as a result of that event, as well as first lady Melania Trump and their son Barron. Trump was eventually treated for COVID-19 at Walter Reed National Military Medical Center, undergoing an aggressive course of treatment and later declaring himself "cured" and "immune" to the disease.

Trump's own experts say there is no "cure" for the disease as of yet. Regarding immunity, particularly "herd immunity," something Trump and his allies have claimed will eventually solve the ongoing pandemic, doctors also say such a course would be particularly devastating to the country.

"In history, most pandemics have been controlled by changes in human behavior and by public health, not by letting it run its course," said Dr. Andrew Pavia, chief of the pediatric infectious diseases division at the University of Utah, in an interview with the American Independent Foundation.

He called the idea "dangerous," warning that the human cost would be "staggering."

Carson and Bossie's infections this week bring the total tally of positive cases in Trump's inner circle to at least 39, including himself.

On Monday, the United States surpassed 10 million cases of the coronavirus with at least 238,000 deaths under Trump's watch.

"The (Trump) administration was cavalier about the risks of the virus for themselves and for the country. And that's one reason why we have so many cases," Dr. Joshua Sharfstein, professor at Johns Hopkins University's school of public health, told the Associated Press.

But despite a surge in coronavirus cases across the nation, Trump has repeatedly claimed that the deadly pandemic is "rounding the corner" or will be gone soon. Last month, the White House even claimed the pandemic was over, before ultimately reversing course.

"Even without the vaccine, the pandemic’s going to end," Trump claimed as recently as October. "It's gonna run its course. It’s gonna end."