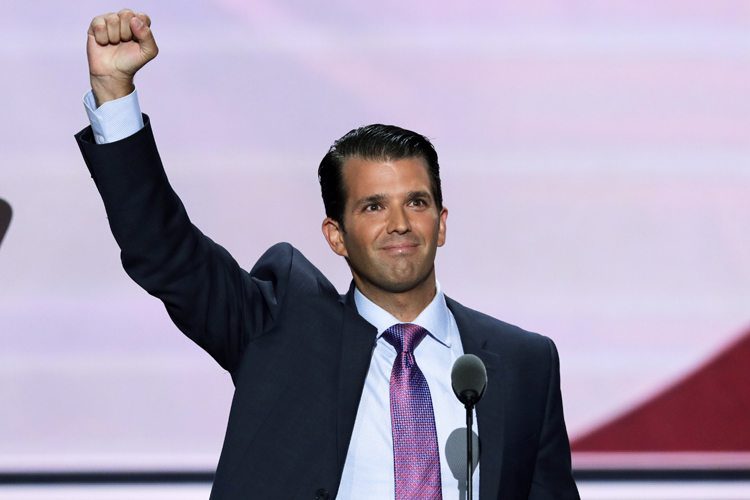 In another stunning act of projection, Donald Trump Jr. claimed the media go easy on Hillary Clinton—and then criticized them using a repugnant Holocaust reference. Which just happens to be a favorite of the alt-right.

He added: "They've let her slide on every in-discrepancy, on every lie, on every DNC game trying to get Bernie Sanders out of this thing. If Republicans were doing that, they'd be warming up the gas chamber right now."

Trump Jr.'s contention that the media have given Clinton less critical coverage is demonstrably untrue. As but one recent example, Media Matters found that cable news devoted 13 times as much coverage to Clinton's health as they had to the Trump foundation.

So his entire argument is based on a false premise. But even more importantly, his language is wildly inappropriate. "Warming up the gas chamber" is an overt reference to the Holocaust perpetrated by the Nazis.

Glibly using that sort of language is deeply offensive to many people who survived the Holocaust, and/or whose family members survived or were killed. Pennsylvania Democratic Party Chairman Marcel L. Groen said in a statement:

It is horrifying that Donald Trump Jr. thinks it is appropriate to casually joke about the Holocaust — and even worse, he is defending it, saying it isn't anti-Semitic. My grandparents died in Auschwitz, as did some of my aunts and uncles. They died in gas chambers. As a naturalized American citizen whose parents came to this country after World War II, I ask Trump to stop trying to reach out to the worst of us; the bigots and the anti-Semites. Making hatred mainstream is not an accomplishment; it is evil, and it is just yet another example of how Donald Trump is unfit to be President of the United States. We must not allow Trump anywhere near the White House.

Although the use of hyperbolic violent imagery is not terribly uncommon among the right wing, this particular imagery is extremely unusual in public discourse.

Where it's not unusual is among the alt-right, some of whose favorite threats/insults are "throw them in the oven" and "warm up the gas chamber." (I have received many such messages myself.)

Trump Jr.'s turn of phrase is a direct shout-out to the white nationalists to whom his father's campaign has become a direct appeal.

.@laseptiemewilay and it certainly suggests he has more than a passing familiarity with the neo-Nazi alt- right.

This is no coincidence. It is further evidence of the dangerous campaign of fomenting violent white nationalism that Trump is running. And it is alarming.

Many people have reached maximum Trump Outrage Fatigue, and the media continually argue they can't even keep up with every terrible thing Donald Trump and his staff and family say or do every day—but we cannot let ourselves become inured to these things.

"He is so relentlessly terrible we can't even care about each one" is not acceptable. The cacophony of awful must induce us to care more , not less.