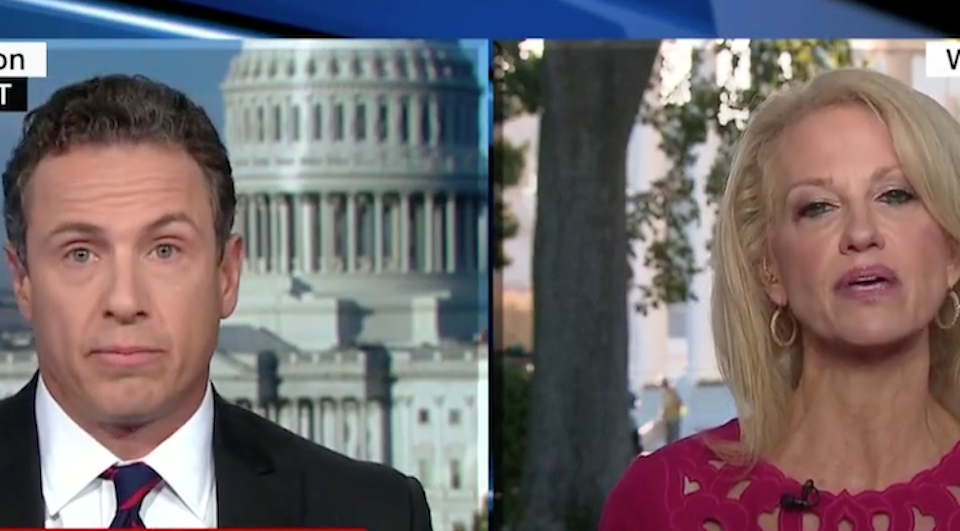 When Kellyanne Conway tried to blame Democrats for not addressing gun violence — even as the White House insists now is not the time to talk about it — CNN's Chris Cuomo set her straight.

This is why Republicans don’t want to talk about gun violence in the wake of horrific cases of gun violence — their arguments don’t hold up.

Kellyanne Conway learned that Thursday morning with an appearance on CNN’s “New Day.” She became one of the first White House officials this week who was willing to have a detailed discussion about guns following the worst mass shooting in modern U.S. history.

Up until now, Trump and White House press secretary Sarah Huckabee Sanders have insisted this isn't the time to discuss the matter.

On CNN, Conway tried to flip the script and claim Democrats such as Hillary Clinton and Sens. Bernie Sanders and Elizabeth Warren only want to talk about tightening gun laws after gun massacres are in the news, and don’t want to have a “thoughtful” debate all year long.

She also attacked CNN, claiming its “obsession with Russia has been to exclusion of this conversation” about guns.

CNN Chris Cuomo, who just returned from several days of reporting in Las Vegas, wasn’t having it. “A lot of this just doesn’t wash,” he told Conway.

CUOMO: I'm tired, so I apologize in advance, but I have to tell you, a lot of this just doesn't wash. All you need to know about the bump stock is that it was legal, and that's what allowed him to lay down that field of fire. That's all you need to know about it. There's no thoughtful conversation to have about it. [...] But I'm saying, don't cheapen what happened in Las Vegas.

CUOMO: I'm going to go there, my friend, and here's why: When Bob Patterson came out last night with his daughter, his 16-year-old daughter, they lost their mother, he lost his wife — know what he wants to know? The same thing that people say, time and time again. Why was this able to —

CONWAY: And I said, let's have a conversation.

CUOMO: But the president says not now. And then it never happens. You make the point yourself. Whether you want to put it on Sanders or any other Democrat. You say they don't talk about it except when these happen. Yeah, that's right. Because when it happens, there's acute need and focus. And when you say, well, we don't want to talk about it now —

CONWAY: I didn't say that.

CUOMO: You're ignoring the urgency and you're hoping it goes away.

CONWAY: I didn't say that. And the president was focused on the tragedy and the victims. You are putting words in his mouth and my mouth. And I'm not going to allow you to do that and cheapen this moment.

CUOMO: That's exactly what he said. You're the one spinning it. I'm trying to de-spin it.

The White House can't hide from current events. Even if those events revolve around yet another deadly gun rampage. Trying to claim Democrats are to blame truly does "cheapen" the debate.