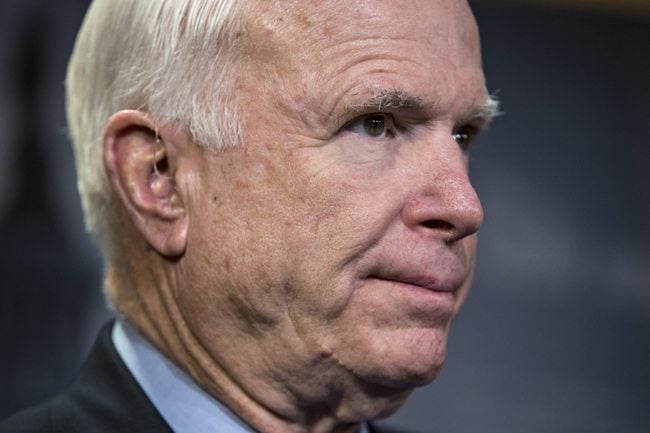 John McCain was probably expecting his path to reelection in the Senate would be pretty easy. After all, he's on his fifth term, and he's one of the most prominent members of his party. But challenger Ann Kirkpatrick is closing in on him—and McCain's desperation as the race tightens is palpable. His latest gambit? Pretending he's pro-choice.

John McCain has some Trump Trouble.

Trump is not the sort of candidate a war hero like McCain wants to support, given Trump's willingness to refer to the U.S. military as "the gang that couldn't shoot straight" and attack a Gold Star family. Trump even attacked McCain himself, saying, in reference to McCain having been a prisoner of war, that he prefers "people who weren't captured."

Still, McCain knew he risked alienating the Republican base if he didn't support the nominee, so he endorsed Trump. But that decision is hurting him, too: Because of Trump's relentless bigotry against undocumented immigrants, a recent poll shows more than 70 percent of Arizona Latinx are less likely to vote for McCain as a result of his endorsement.

First, he tried walking the tightrope between Trump's appeal to white nationalism and his own need to appeal to Latinx voters by publishing two different versions of his immigration position. The version on his new Spanish-language site emphasizes his record supporting a pathway to citizenship, which is noticeably absent from his English-language campaign site, where he instead positions himself as an advocate for tougher border security.

McCain also failed to cover himself in glory by refusing to denounce the Arizona Republican Party after they depicted his opponent Kirkpatrick on a bullet-ridden "wanted" poster. If anyone understands the potential harm that such imagery can do, it should be McCain, whose former running mate, Sarah Palin, depicted former Congresswoman Gabrielle Giffords on a "crosshairs map" before she was nearly killed by a gunshot wound to the head in a mass shooting near Tucson. Giffords and her husband, Mark Kelly, released a statement asking McCain to apologize for the "wanted" poster's violent imagery. He passed.

McCain himself then released an attack ad which accused Kirkpatrick of "turning her back" on voters, but the footage used was taken—and decontextualized—from a 2009 event at which the crowd had become "angry and agitated." Navajo County Sheriff K.C. Clark said he had asked Kirkpatrick to leave the event for everyone's safety, which he subsequently shut down. Clark said: "And on January 8th, 2011, as I watched the coverage of the Tucson shooting, I knew, without a doubt, that I had made the right decision in Holbrook."

Now, McCain is trying to convince voters that his long record of being anti-choice doesn't matter because he doesn't believe abortion should be banned. During a radio interview on the Bill Buckmaster Show this week in Tucson, a caller asked him "what we should do if Planned Parenthood is defunded so that women can have cancer screening and birth control." McCain responded:

I do not believe that we should ban abortion but I happen to personally be pro-life. But I don't feel like spending Americans tax dollars, including mine, who are opposed to abortion that American tax dollars should be spent for that purpose.

By the time McCain was running for president in 2008, he had already voted 125 times against reproductive health. He has voted to defund Planned Parenthood, he supports the Hyde Amendment, and he believes Roe v. Wade should be repealed.

If McCain believes that abortion shouldn't be banned, all it means is that McCain supports the loathsome strategy of chipping away at abortion rights until Roe has been rendered an empty statute.

It's a strategy anti-choice extremists have no compunction about detailing: As Dahlia Lithwick reported in a 2011 piece for Slate, the Rev. Pat Mahoney, director of the Christian Defense Coalition, openly admitted: "We don't have to see a Roe v. Wade overturned in the Supreme Court to end it. … We want to. But if we chip away and chip away, we'll find out that Roe really has no impact. And that's what we are doing."

And McCain has been happy to be their legislative ally, for many years. He can say that he doesn't support a wholesale ban on abortion all he wants, but the fact remains that it is, at best, a technical truth that conceals his abetment of a sinister agenda to severely restrict access to abortion, until it is a legal right that people who want or need to terminate pregnancies have no opportunity to exercise.

D.B. Mitchell, communications director for the Kirkpatrick campaign, said in a statement to Shareblue:

It's ridiculous that John McCain would try to hide his abysmal record on women's issues. McCain ran for president opposed to a woman's right to choose, opposed equal pay, and even voted to ban all abortions during his time in the Senate. His own campaign materials highlight his belief the government should make healthcare decisions for women. His out-of-touch positions have always been wrong for Arizona women -- and it's clear he will say or do anything in a desperate attempt to save his political career.

This isn't the first time we've seen John McCain try to cover up decades of votes to salvage his reelection bid. No matter who he's talking to he can't hide the fact that he's spent his decades-long career trying to ban abortion and take women's health care decisions away from them.

McCain is desperate, and, in his desperation, he's seemingly willing to abandon whatever principle he might have had, once upon a time.

He is cynically trying to trade on being some sort of moderate on abortion, when he is anything but—which would be bad enough on its own, but he has given away the game. He clearly knows that supporting legal abortion with robust access is the right thing to do, but instead of actually staking out that position, he merely gives the illusion of holding it.

That simply isn't a candidate voters can trust.