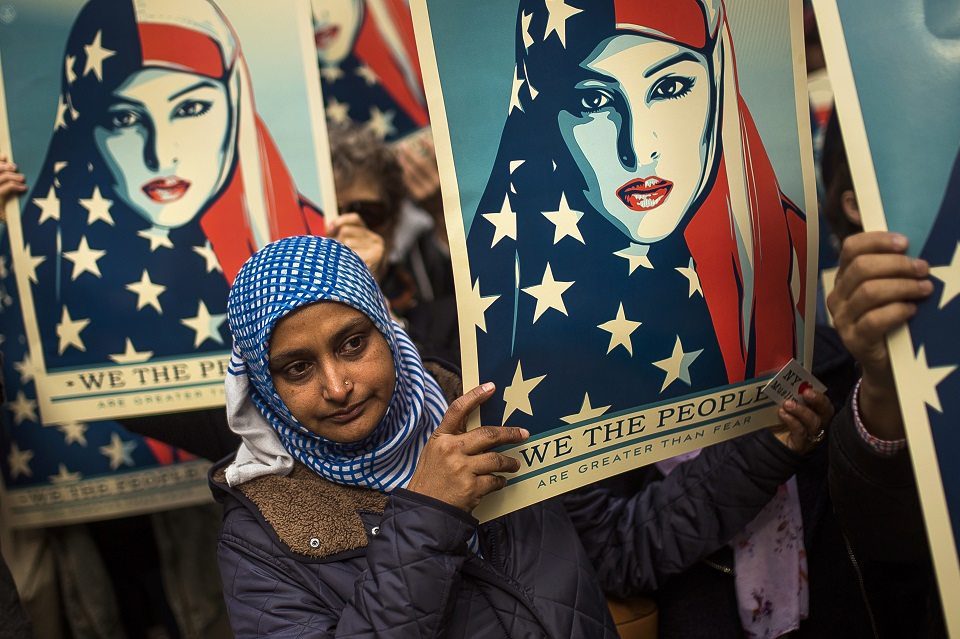 (AP Photo/Andres Kudacki)
Get The American Independent in your inbox

Donald Trump has dropped Iraq from the list of seven majority-Muslim countries barred entry to the United States under his revised Muslim ban. But doing so only adds more proof to the growing evidence that this policy is all about bigotry and public relations, not security.

Iraq is one of the major fronts in the ongoing battle against ISIS, yet Donald Trump has determined it unnecessary to include the country in the latest iteration of his Muslim ban, which he's decreed will not take effect until March 16th.

Trump's own top leadership team — Secretary of State Rex Tillerson, Secretary of Defense James Mattis, and National Security Adviser H.R. McMaster — reportedly made the direct request to have Iraq removed for diplomatic reasons, showing how arbitrary and unrelated to national security the makeup of the list is.

The conservative Wall Street Journal pointed out this hypocrisy, noting that Trump was "forgoing one of its central and politically insulating rationales for its original list: that citizens from those seven nations already had been singled out under the Obama administration for additional screening.”

Former Department of Homeland Security Deputy General Counsel Jonathan Meyer said, "Taking Iraq off does harm the case for the travel ban," and doing so "adds to the mounting evidence that this order is not based on risk-based policy-making."

In the original version of the first executive order from the Trump administration, seven majority-Muslim countries —  Iraq, Syria, Sudan, Iran, Somalia, Libya and Yemen — were barred entry to the United States. A Department of Homeland Security release specifying what nations the ban applied to said the ban was put in place to "ensure that those entering this country will not harm the American people subsequent to their entry."

Chaos ensued, and families were detained and separated as an unprecedented protest movement, in concert with legal challenges from the ACLU, spread to multiple international airports across the country. The visuals were terrible for Trump, as family members pleaded for the release of relatives that had been detained, and as those people were released stories emerged of innocent people being treated like criminals due to their faith.

One of the black eyes for Trump that emerged from the episode were stories of Iraqis who had done so much to help the American armed forces during the Iraq War now barred from entry to the country. Hameed Khalid Darweesh worked with Americans for a decade in Iraq, putting himself and his family in danger to help U.S. troops in combat, yet was still detained at JFK airport due to the Trump ban. He was only released to his family after Democratic Reps. Jerrold Nadler and Nydia M. Velázquez publicly intervened on his behalf.

But dropping Iraq from the ban shows once again that the ban is not about security, but is all about bigotry and public relations.

The initial list omitted countries like Saudi Arabia, where the 9/11 hijackers originated from, and a subsequent report from the Department of Homeland Security explicitly detailed that foreign born extremists who have planned attacks against America were radicalized here, not abroad.

Further proving that security is a red herring with the legally dubious ban, Trump delayed announcing the new ban because he wanted more days for the media to focus on positive media from his address to a joint session of Congress.

Democrats have called out Trump's ban. Senate Democratic Leader Chuck Schumer said, "A watered down ban is still a ban. Despite the Administration’s changes, this dangerous executive order makes us less safe, not more, it is mean-spirited, and un-American. It must be repealed. Delaying its announcement so the President could bask in the aftermath of his joint address is all the proof Americans need to know that this has absolutely nothing to do with national security."

House Democratic Leader Nancy Pelosi added, "The President’s conduct over the weekend emphasizes how little regard he has for reality.  As the leaked reports from Homeland Security exposed, the White House has desperately sought to invent an after-the-fact justification for its baldly prejudiced and unconstitutional Muslim and refugee ban.  Protecting the American people requires us to be strong and smart, not reckless and rash."

Despite Trump’s warnings about the "peril" of not enforcing his ban after a court challenge struck it down, his priorities have always been spin and public relations, delaying its roll-out and modifying the content in order to smooth the edges around a discriminatory policy so that the public laps it up.