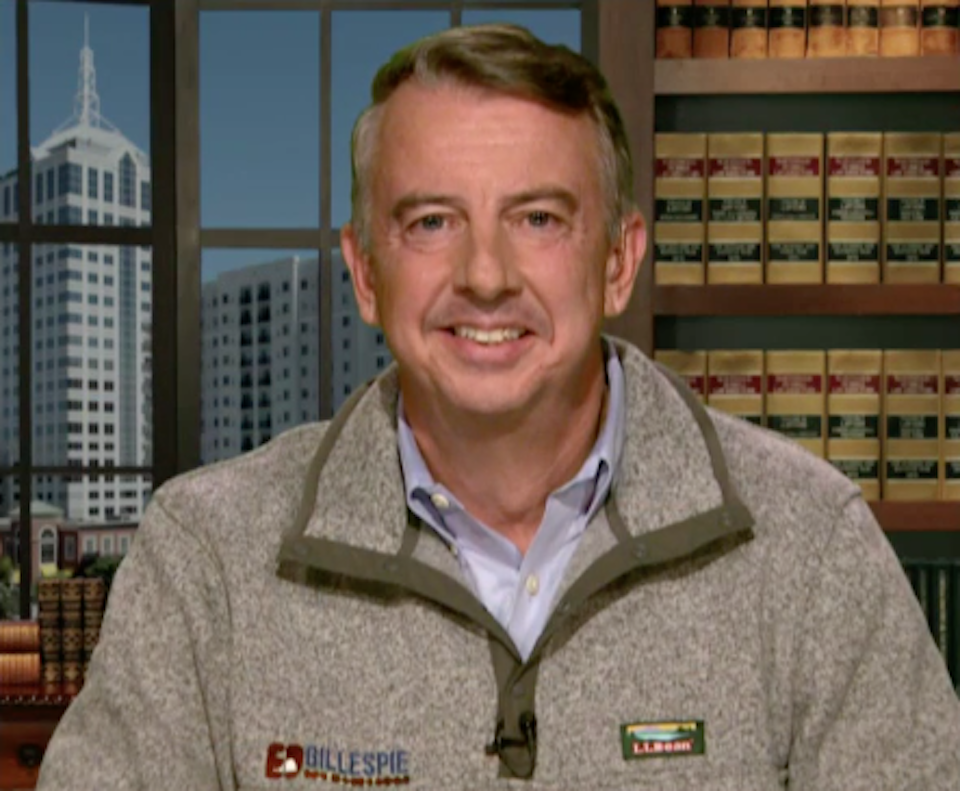 Ed Gillespie, the Republican nominee for Virginia governor, is bragging about his NRA endorsement only a day after 26 people were murdered in a mass shooting in Texas.

Republican Ed Gillespie turned a statement about the mass shooting at First Baptist Church in Sutherland Springs, Texas, into a spiel about the NRA's endorsement of his campaign for governor of Virginia.

Gillespie made the jarring boast during an an interview with Dana Perino on Fox News, the national media outlet he has relied on the most in the closing months of his campaign.

After offering condolences to the families of those who were killed or hurt in the shooting, Gillespie immediately touted the support he has received from the extremist gun group.

"I am a defender of our Second Amendment rights," he said. "I do have the support of the NRA, my opponent is endorsed by Michael Bloomberg and his gun control group."

PERINO: Gun control, gun rights has been a topic in the campaign, and the NRA gives you an "A" rating and your opponent Ralph Northam an "F" rating. As you've gone around campaigning, all throughout the state, what do you hear from people about gun control?

GILLESPIE: Well, Dana, let me say that my fellow Virginians are upset, distraught by what we've seen — the news reports coming out of Texas — we are praying for the victims and their families, and it's stomach-turning, it's heartbreaking. Obviously, in all elections, the Second Amendment is an issue. I am a defender of our Second Amendment rights, I do have the support of the NRA, my opponent is endorsed by Michael Bloomberg and his gun control group, and you know, we do have a different perspective on that issue and voters will take that into account tomorrow here.

The closely intertwined statements were jarring, especially since the NRA has played a key role in enabling mass shootings like the one in the church. The group has steadfastly refused to back gun safety measures with popular support, and the Republican Party has almost completely fallen in line.

The NRA opposes limits on bump stocks, a topic that came up after the mass shooting in Las Vegas only a month ago. The tools allow guns to be modified to shoot more bullets and inflict more death.

The NRA also opposed the popular fixes to background checks proposed soon after the Sandy Hook massacre, where 27 people were killed, including 20 children between as young as 6 years old.

Gillespie's opponent, Democratic Lt. Gov. Ralph Northam, is opposed by the NRA and has been endorsed by gun safety groups like Moms Demand Action for Gun Sense, part of Everytown for Gun Safety and the Coalition to Stop Gun Violence.

As a state senator, Northam called for a ban on some assault weapons and high-capacity magazines after the Virginia Tech massacre that killed 32 people. He has also pushed to end the gun show loophole, which allows people to purchase guns without a background check. Terrorists have pushed this as a way to arm themselves.

Gillespie, meanwhile, has pledged allegiance to the NRA. He filled out a candidate questionnaire, indicating where he stood on the organization's key issues, though he has refused to release the document's details. His undisclosed responses earned him the organization's highest rating.

The questionnaire hints at serious implications for gun safety in Virginia, but while Gillespie has touted his "A" rating and endorsement from the NRA, he won't come clean about what he promised to get that approval.

Less than 24 hours after the Texas shooting, and in the same breath, Gillespie shamelessly touted his NRA support. It was a crass move, with deadly consequences for Virginia if he wins.