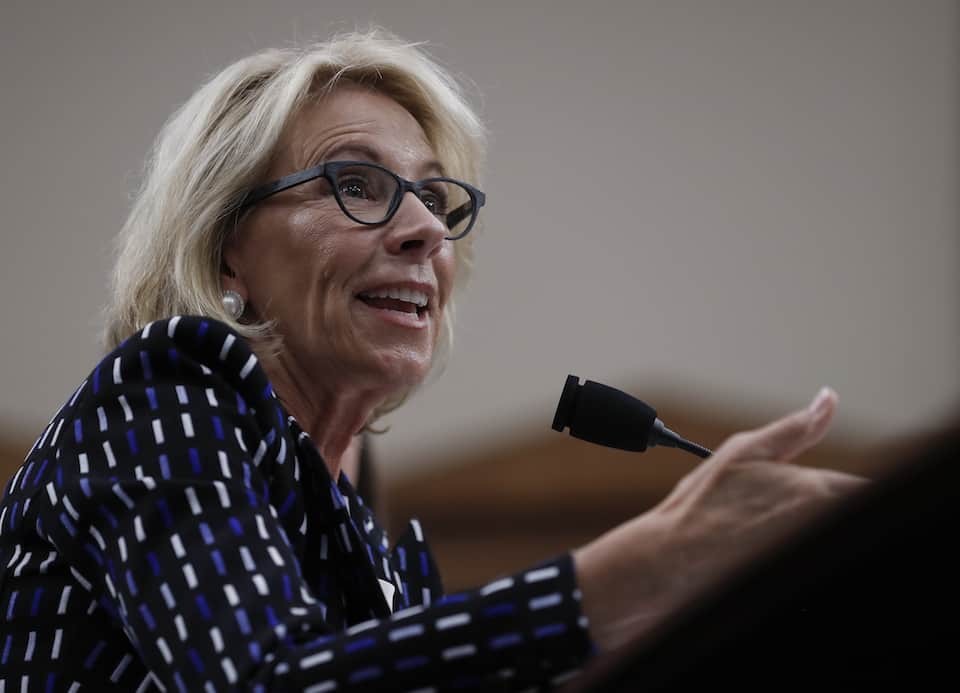 During her testimony before the Congressional Budget Committee, Education Secretary Betsy DeVos made clear she prioritized "state flexibility" over children's civil rights.

When Donald Trump appointed Betsy DeVos — a billionaire and major donor to his presidential campaign — to be his education secretary, alarm bells rang throughout the education community.

DeVos is a well-known opponent of public schools, and her family has donated millions of dollars to organizations that fight against civil rights for lesbian, gay, bisexual, and transgender people. Due to the severity of the concern, Democrats were even able to delay DeVos' confirmation hearing.

Nonetheless, she was ultimately confirmed, as were concerns about her willingness to stand up for the rights of all American children at her recent appearance before the Congressional Budget Committee.

At the budget hearing, Rep. Katherine Clark (D-MA) pressed DeVos on whether she would ensure states did not promote discrimination against and exclusion of LGBT and other vulnerable children at schools receiving federal monies. Like her boss Trump, DeVos tried to hedge and answer with meaningless filler words. Nevertheless, Clark pinned her down.

DeVos went on the record as refusing to commit to withholding federal money from schools who discriminate or exclude children for any reason, whether based on gender, sexual orientation, race, or special needs:

CLARK: I want to ask, particularly, is there a line for you on state flexibility? You are the backstop for students and their right to access a quality education. Would you, in this case, say we're going to overrule and you cannot discriminate, whether be on sexual orientation, race, special needs, in our voucher programs? Will that be a guarantee for you for our students?

DEVOS: For states who have programs that allow for parents to make choices, they set up the rules around that.

CLARK: So that's a no. Do you see any circumstance where the federal Department of Education under your leadership would say that a school was not qualified? What if they said we are not accepting African-American students, but that was okay with the state? Does the state trump — do you see any situation where you would step in?

DEVOS: Well again, I think the — the Office of Civil Rights and our Title IX protections are broadly applicable across the board. But when it comes to parents making choices on behalf of their students —

CLARK: Yes or no.

DEVOS: — to have flexibility —

CLARK: So if I understand your testimony, I want to make sure I get this right, there's no situation of discrimination or exclusion that if a state approved it for its voucher program, that you would step in and say that's not how we're going to use our federal dollars? There's no situation, if the state approved it, that you would put the state "flexibility" over our students? Is that your testimony?

DEVOS: I think — I think a hypothetical in this case is not —

CLARK: It's not a hypothetical. This is a real school applying for — that receives dollars —

CHAIRMAN: The gentlelady's time has expired, but I will allow the secretary to answer.

DEVOS: I go back to the — the bottom line is we believe that parents are the best equipped to make choices for their children's schooling and education decisions, and too many children today are trapped in schools that don't work for them. We have to do something different. We have to do something different than continuing a top-down, one size fits all approach and that is the focus and states and local communities are best equipped to make these decisions and framework on behalf of their —

CLARK: I am shocked that you cannot come up with one example of discrimination that you would stand up for students.

During his campaign, Trump referred to the public school system in the United States as a "government-run education monopoly" and promised to divert federal funding away from public schools toward private schools through the use of "vouchers." Under the cover of the lie of  "school choice," the Trump administration is undertaking the dismantling the entire systems of free, public education throughout the nation.

Given her testimony before the Budget Committee, it appears DeVos is the perfect person for such a destructive job.