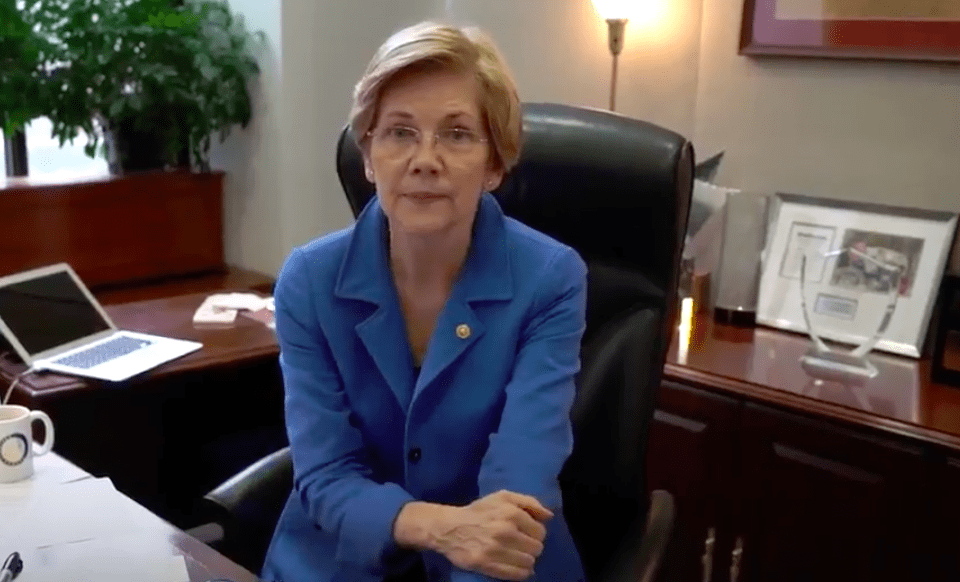 Sen. Elizabeth Warren
Get The American Independent in your inbox

Donald Trump made a lot of pie-in-the-sky promises on the campaign trail, including a pledge not to cut Social Security or Medicare.

Even during the announcement of his candidacy, Trump rallied the audience during the close of his speech, saying, "Save Medicare, Medicaid, and Social Security without cuts. Have to do it!" He reasserted that promise repeatedly during the campaign, using it as a sure-fire applause line.

But in now-typical fashion, Trump is breaking this core pledge to his supporters, in a big way: The recently released White House budget calls for real cuts of $73 billion to Social Security.

Not one to mince words, Massachusetts Democratic Senator Elizabeth Warren is calling him out on the betrayal, and rousing American lawmakers and citizens to fight back:

.@realDonaldTrump promised not to cut Social Security. I’ve looked at the budget, & here it is: $73B in Social Security cuts. pic.twitter.com/9QYxEwUPxs

WARREN: So much for that campaign promise! The budget is out today, and now we've seen it. Right here, 'Cut Social Security $73 BILLION over the next ten years.' There's the cut.

Why does Social Security matter to you? You're young, you're healthy. One out of every three young workers in America today — projected over your working years — is likely to need Social Security. What happens if you get hit by a bus tomorrow? The answer is, if you become disabled — or, God forbid, you die and leave behind children, people who depend on you — Social Security is there.

And how about if you're in your 50s or 60s — why do you care? The answer is because 70 percent of the people who get disability insurance under Social Security are in their 50s and 60s. People who get hurt on the job. People who get sick. People who need a little extra help because something bad has happened.

That cannot happen on our watch. We fight back.

Lest one think this is a mistake of which Trump is unaware, his own budget director clearly stated in a press briefing that he "hopes" millions will lose their Social Security benefits.

In addition to cutting Social Security, Trump's budget would also throw millions of children off of Medicaid, breaking yet another one of his campaign promises, and leaving some of America's most vulnerable young people without access to health care.

And Warren was not alone in calling out the cruelty of Trump's proposals. A number of her Democratic colleagues in the Senate are making the same crucial case:

What do we think of the #TrumpBudget? We'll tell you, and then we need you to speak up, rise up, and help us fight for these prgms: pic.twitter.com/3zApYtipMb

SCHUMER: This budget hurts the middle class more than any budget I have ever seen.

WYDEN: The Trump budget includes a trillion dollars worth of cuts in health care, in Medicaid, to the most vulnerable older people and children. That's not what our country is all about.

GILLIBRAND: We are called to help the least among us. This budget harms the most vulnerable citizens — from children, to seniors, to our veterans.

MURRAY: This budget cuts over five billion dollars from medical research. That impacts you — if you have a family member with Alzheimer's or cancer or any disease, this will hurt.

MCCASKILL: I just came from doing town halls, all across rural Missouri. And I can tell you what they need: jobs. They need jobs. So Trump — President Trump cutting 500 billion dollars out of economic development, in the rural parts of this country? I don't get it. I just don't get it.

HEITKAMP: You know, the Trump budget does an amazing thing. It leaves rural America behind. We absolutely cannot have that, if we're going to develop and improve the quality of life for rural America. This budget gets an 'F' from rural America.

WHITEHOUSE: If you want a small example of how cruel and mean-spirited the Trump budget is, look no farther than Meals on Wheels. They cut Meals on Wheels because they don't know what it delivers. What it delivers is a hot meal to a lonely senior. How can you not understand that?

KAINE: The Trump budget cuts 3.2 billion dollars from higher education, including moneys that help kids work their way through college. This is heartless.

BROWN: What kind of government cuts health insurance for children, and cuts children's hospitals? In my state, 200,000 families are getting treatment for opioid addiction. What happens to them with the Trump budget?

CASEY: Donald Trump wants to cut the Women, Infants, and Children's Program by over a billion dollars. That's obscene.

BALDWIN: On education and workforce readiness, this budget sends us in the wrong direction.

STABENOW: The Trump budget completely zeroes out funding for my beloved Great Lakes, for the Chesapeake Bay, all the waters around the country that are so important to our way of life. Shame on them.

CANTWELL: President Trump's budget on energy and the environment is horrible. He wants to cut energy efficiency and renewable energy like wind and solar, and instead, drill everywhere in America. We can't afford it — he's literally making energy more expensive in the Pacific Northwest for businesses and consumers, and we can't afford it.

FRANKEN: Trump's budget spends more than a billion dollars on his wall along the Mexican border. And it's paid for by you, the American taxpayer, not — as he promised — by Mexico. That ain't gonna happen.

MANCHIN: I don't know of a person in West Virginia — as young as a child may be, as old as an individual may be — that's not affected. Every nook and cranny, every hollow, every creek in West Virginia — every person that lives in my state is affected by this horrible budget. And I can only ask my Republican friends and colleagues: 'Please, explain how you can defend and vote for this?'

BOOKER: Let's all speak up against this budget that will hurt America and hurt people.

SCHUMER: Remember, Congress has the power to change this awful budget. Speak out now.

The tragic reality is that, among the millions of people who will be harmed by Trump's budget are many of the people who voted for him because they believed the lies he fed them so easily and so often.

As Warren said, this cannot happen on our watch. The majority of Americans know we all benefit when — as a community of citizens and neighbors — we take care of each other and are able to ensure that everyone around us has their needs met. It is crucial to heed the call to speak out, and to fight back against these cuts and the heartless values they represent.