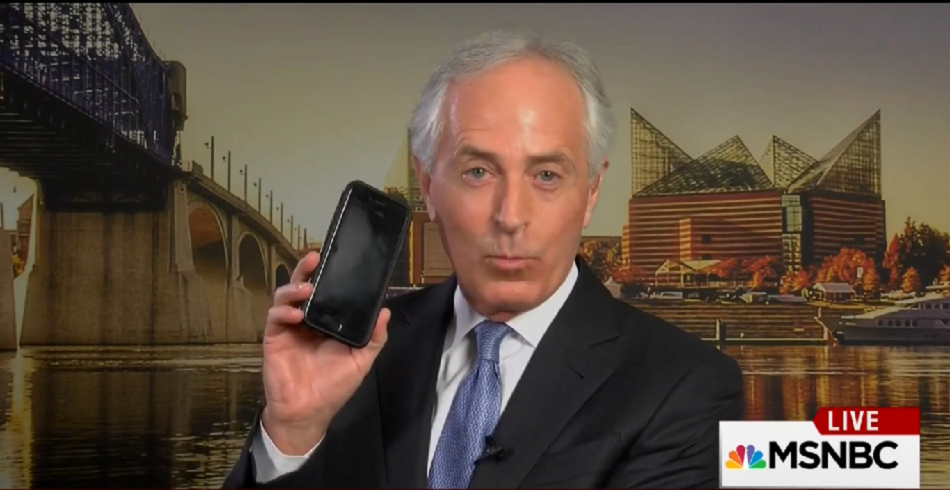 Senator Bob Corker (R-TN) claims to support investigations into Russian interference in our election. But he is not supporting the independent, bipartisan investigations which are needed. And he revealed his true colors on MSNBC's Morning Joe, saying we do not need "to have our hair on fire" about foreign hacking.

Previously, I have written about the underhanded strategy of Senator Mitch McConnell (R-KY) coming out in favor of a Senate investigation of Russian election tampering while actually taking steps to ensure any investigation goes nowhere.

He is not alone: His colleague, Senator Bob Corker (R-TN), is adopting the same stance.

A month ago, Corker appeared to be expressing genuine concern about the issue. In an appearance on Morning Joe, Corker accused Russia of "overt" and "unprecedented" interference in our election:

The fact is, there’s nothing Putin would like more than to discredit the electoral process here in our country. Look, we in some ways helped discredit their process back in 2011. What was unprecedented about this was the overt nature. Again, things constantly are occurring where countries are doing things to in some ways destabilize [elections]. It happens, we know that.

Corker has apparently adopted a nihilistic view that we should not get too worked up about Russians hacking the Democratic Party because people are always trying to hack everything.

And while Corker, who chairs the Senate Foreign Relations Committee, plans to launch his own investigation, CNN reports that Corker is not proposing a select committee, and that hearings would be classified and closed to the public.

Like McConnell, Corker wants an investigation that would be rigidly controlled by the GOP; it would not be independent or bipartisan.

Meanwhile, Corker released a statement praising Trump's pick of Rex Tillerson for Secretary of State, even though Tillerson has a blatant financial interest in the repeal of Russian sanctions that block his oil company from drilling in Siberia. If Corker were really concerned about Russian influence on the election, putting U.S. foreign policy in control of an oil baron who stands to profit from closer ties to Russia would seem to contradict that concern.

Corker's actions are simply the latest in an emerging pattern of feigned concern and obfuscation. Republican congressional leaders want the Russia issue to go away, and they are keeping any investigation on a tight leash to avoid accountability. The American people deserve better from their leaders in the face of this threat to democracy.