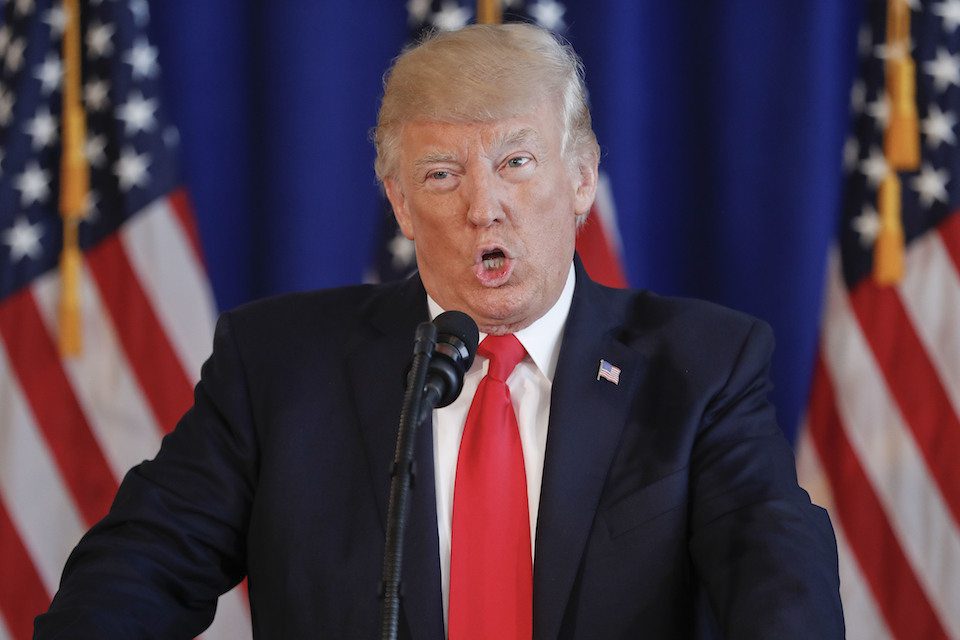 In a repugnant new campaign ad, Donald Trump used images of Democratic leaders Nancy Pelosi and Chuck Schumer at a vigil against his Muslim ban to illustrate some of his "enemies."

Even though Donald Trump will not be up for re-election until 2020, he cannot get himself out of campaign mode.

He has taken time out of his schedule to hold campaign rallies in front of the base that gives him the undying adulation he so clearly craves, especially as his poll numbers nationwide continue to crater.

Now he has released a campaign ad titled "Enemies,"and there is no vagueness about who those enemies are, as the ad features multiples images of mainstream journalists from CNN and MSNBC, as well as several prominent congressional Democrats:

NARRATOR: Democrats, obstructing. The media, attacking our president. Career politicians standing in the way of success. But President Trump’s plan is working.

One million jobs created. More Americans working than ever before. Unemployment, lowest level since 2001. The stock market, all-time record highs. The strongest military in decades.

The president’s enemies don’t want him to succeed. But Americans are saying, let President Trump do his job.

The ad has been condemned as tasteless, as Trump chose to release it immediately after deadly white supremacist riots in Charlottesville, and also because he singled out and targeted Black journalists.

But there is another reason the ad is disgusting. The footage used in the ad of House Minority Leader Nancy Pelosi and Senate Minority Leader Chuck Schumer was taken from a candlelight vigil in front of the Supreme Court building, for people hurt by Trump's Muslim ban:

While branding Democrats "enemies," the Trump ad displayed a picture of Democratic leadership standing up for friends and family of Americans, and vetted refugees, who are being kept from entering the country because of Trump's hateful agenda.

It is not surprising Trump would attack Democrats for resisting his policies, but the utterly classless and crude nature of this particular attack is yet another new low.

Trump has proven again and again that there are no depths to which he is unwilling to sink to tar people who oppose him. This ad proves that his assaults on basic decency will only worsen.