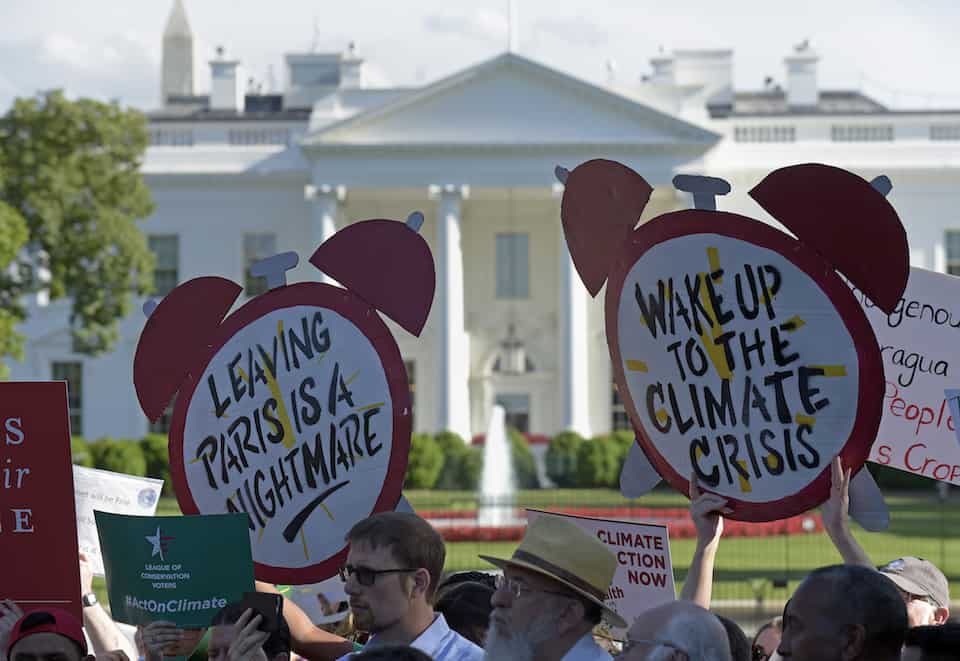 Immediately after the news came that the Trump administration will be pulling the United States out of the Paris climate accord, repudiation came from all sides. Statehouses, foreign leaders, and corporate America all agree that this is a dangerous and wrong-headed move.

Donald Trump recently spent his first trip abroad as president offending our country's friends and allies, and now that he is back home, he's only stepping it up. The global relationships that Trump has already damaged are about to be further strained.

Before the Rose Garden announcement had even ended, criticism of Trump's decision to pull the United States out of the historic Paris climate accord came swiftly and stingingly from beyond our borders, as foreign leaders from around the world registered disagreement and dismay at the move.

The leaders of France, Germany, and Italy issued a joint statement, forcefully declaring that the agreement "cannot be renegotiated," noting that it is "a vital instrument for our planet, societies and economies."

Canadian Prime Minister Justin Trudeau stated that his country is "deeply disappointed" by Trump's "disheartening" decision, declaring that Canada would "continue to work with our domestic and international partners to drive progress on one of the greatest challenges we face as a world."

The Prime Minister of Belgium called it a "brutal act."

The Chinese Foreign Ministry stated, "Climate change is a worldwide challenge and no nation can stay away." They further noted that China would continue to "seriously fulfill the Paris Climate Accord" despite Trump's move.

And their sentiments are shared by many others within the United States, from statehouses to corporate America.

The governors of New York, California, and Washington — who together represent nearly 68 million Americans — released a statement calling Trump's move a "reckless decision" that will have "devastating repercussions ... for our planet." They also announced the formation of the "United States Climate Alliance," for states to come together and take their own "aggressive action" against climate change.

And in response to Trump's remark that he was "elected by voters of Pittsburgh, not Paris," the mayor of Pittsburgh responded pointedly: "As the Mayor of Pittsburgh, I can assure you that we will follow the guidelines of the Paris Agreement for our people, our economy & future."

Senator Chuck Schumer (D-NY) was equally biting in his reaction:

And President Barack Obama slammed Trump for the "absence of American leadership" his move signals to the world.

The corporate world had its own strong reactions to this dangerous decision. Facebook CEO Mark Zuckerberg, General Electric CEO Jeff Immelt, and Google CEO Sundar Pichai all expressed disappointment and determination to keep fighting climate change despite the move. They were joined by companies such as Intel, Microsoft, Amazon, and Uber.

Tesla CEO Elon Musk, who had been on Trump's economic advisory council, announced he would be leaving the council over this decision. And Goldman Sachs CEO Lloyd Blankfein, in his very first tweet, registered his opposition to Trump's move.

And even Exxon — also known as the former place of employment for Trump's Secretary of State, Rex Tillerson — joined a last-ditch effort to dissuade the administration from this decision.

But apparently, those warnings, along with the predictable backlash from around the nation and the world, were not enough to convince Trump to put people and the planet over profits for his wealthy friends. Not even his own daughter's supposed "moderating influence" could talk Trump down from his reckless agenda.

And if the United States truly continues down this path of ignoring the dire issue of global climate change and allowing the progress we have made to wither away, not only will we forfeit our right to claim any kind of world leadership — we will simultaneously imperil future generations' human rights to a safe and healthy planet.