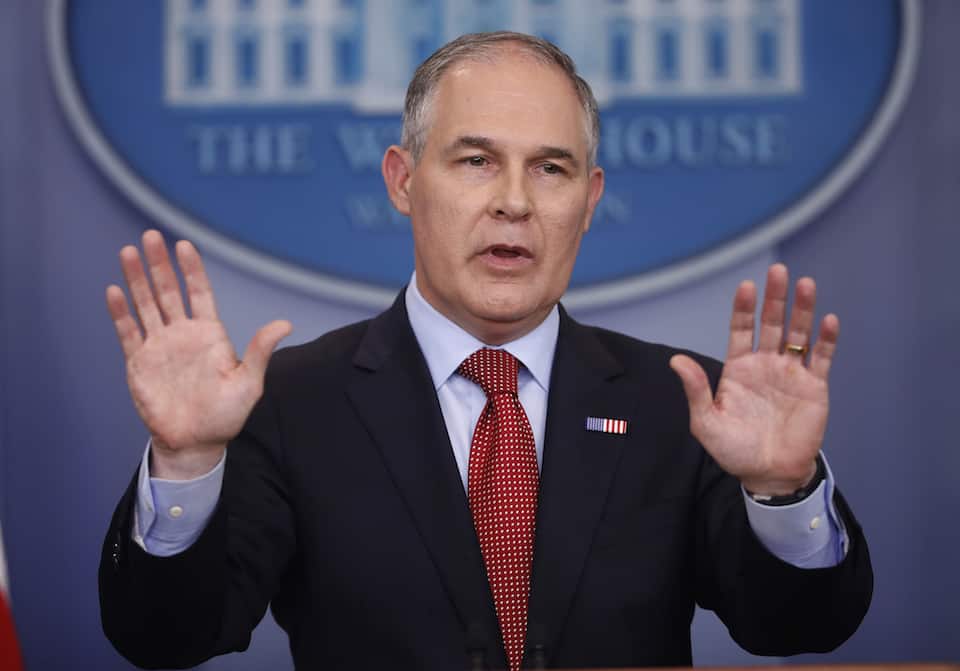 EPA Director Scott Pruitt just upped the ante of his war on science.

A leaked memo reveals that the Environmental Protection Agency (EPA) sent employees a list of talking points on Tuesday instructing them to cast doubt on the scientific consensus about climate change.

The internal EPA memo, which was obtained by Huff Post, includes a set of eight "approved talking points" sent to EPA staffers by the agency's Office of Public Affairs.

The talking points instruct employees to highlight scientific uncertainty and lack of evidence linking human activity to climate change — statements that are contradicted by the 2017 federal climate assessment, which concluded that "it is extremely likely that human activities, especially emissions of greenhouse gases, are the dominant cause of the observed warming since the mid-20th century."

One of the talking points in the memo encourages EPA staffers to question whether fossil fuel emissions directly contribute to climate change, stating incorrectly that "clear gaps remain including our understanding of the role of human activity and what we can do about it."

The memo also casts doubt on the scientific consensus surrounding climate change, claiming that the "degree and extent" of human impact on climate change "are subject to continuing debate and dialogue."

In reality, 97 percent of actively publishing climate scientists agree that the warming trends observed over the past century "are extremely likely due to human activities."

The leaked memo represents an escalation of EPA Director Scott Pruitt's war on science, indicating that his anti-science views are about to become part of official EPA communications. In effect, misinformation will be given the appearance of legitimacy with the stamp of a respected government agency.

While Pruitt claims that he believes in climate change, he denies the science linking it to human activity. Under his direction, the EPA has worked to roll back critical environmental regulations that experts warn will speed up the rate of climate change.

In addition to unraveling climate-related regulations, Pruitt has also dismantled fundamental clean air and water mandates. According to Inside Climate News, "Over the past 13 months, Pruitt's EPA has taken at least 15 major actions on air pollution—all to delay, weaken or repeal protections, and all opposed by the American Lung Association and other health groups."

At the same time, Pruitt has taken steps to censor scientific information that might reveal the harmful impact of the Trump administration's environmental policies. This started shortly after Pruitt's confirmation as head of the EPA, when he he personally approved the removal of references to climate change and climate-related government programs from the EPA's website.

Just last week, Pruitt announced plans to restrict the EPA's use of scientific research in writing environmental rules — a move that two former top EPA officials blasted as an "attack on science."

Now, it appears that Pruitt is upping the ante of his assault on his science, using misinformation and deceptive talking points to spread his anti-science beliefs throughout EPA offices nationwide.