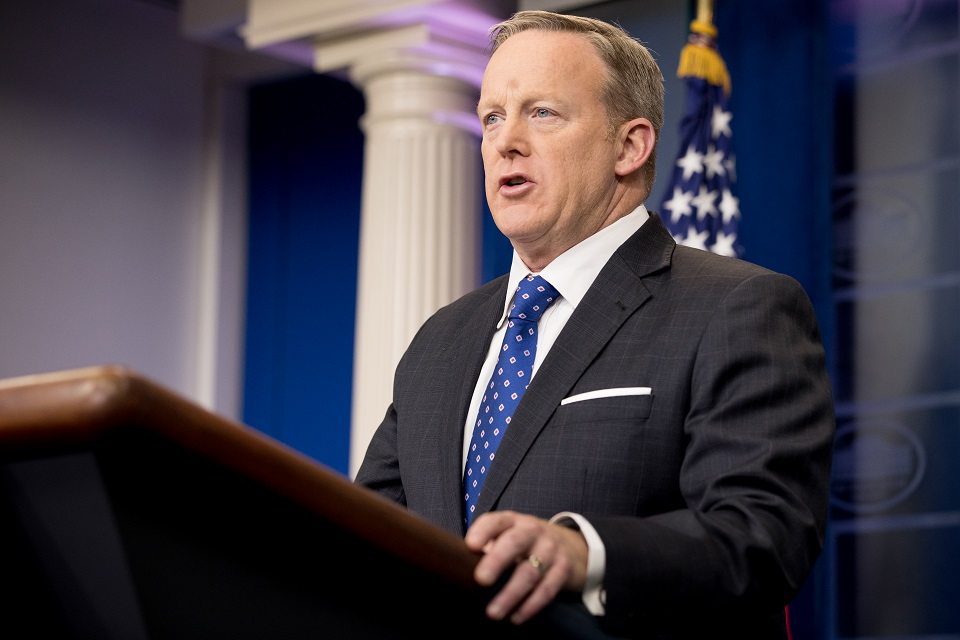 Even as he tried to promote Donald Trump's bad lip service on anti-Semitism, White House Press Secretary Sean Spicer could not help but slip in some anti-LGBTQ bigotry at his daily briefing, erasing crimes based on gender identity or sexual orientation from Trump's late and generic denunciations, and telling another reporter that transgender civil rights should be left to the states.

Donald Trump finally got around to denouncing the latest wave of anti-Semitism which has swept the country, but even as the White House attempted to bolster that meager lip service, it managed to demonstrate another form of bigotry.

Responding to questions about Trump's delayed reaction (following multiple opportunities at national press conferences), White House Press Secretary Sean Spicer twice failed to include gender identity or sexual orientation as traits that should not be targets of hate:

Very forcefully against those who are seeking to do hate, or to tear people down because of their religion, or their gender, or the color of their skin. Those are all things I think the president is done.

It is important to note that Spicer included "gender," but not "gender identity," which regularly excludes protections for individuals who are transgender and who are often the victims of violent hate crimes based on their trans identity.

In addition to those key omissions, Spicer also blew loudly on a familiar dog whistle, in response to The Washington Blade reporter Chris Johnson's question about the Obama administration's guidance on the use of bathrooms and locker rooms by transgender students:

Spicer is wrong, of course: The Obama-era guidance was in regard to an existing federal law, Title IX. But more broadly, the argument that civil rights should be left to the states is a longtime appeal to white supremacy. In erasing gender identity and sexual orientation as immutable traits, and leaving civil rights for transgender people up to the states, Spicer makes clear whose side this White House is on.

The performance was not lost on prominent civil rights leaders and organizations:

By almost three million votes, the American people voted for an inclusive society, which is why performances of exclusion like Spicer's will continue to spark fierce resistance.