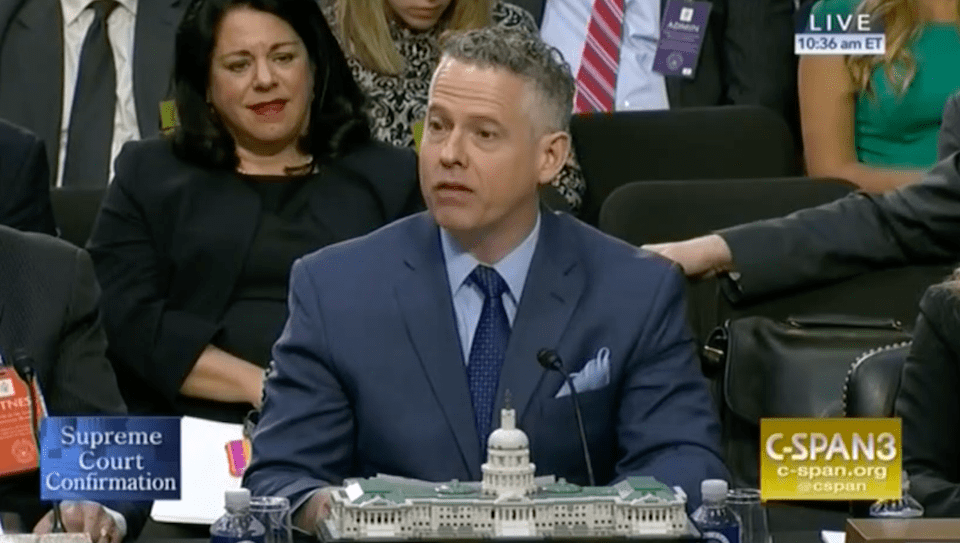 The father of an autistic child whom Supreme Court nominee Neil Gorsuch ruled against in a now-overturned case slammed him in Congressional testimony, exposing Gorsuch's track record of decisions against the disabled community.

Jeffrey Perkins, the father of an autistic child whom Judge Neil Gorsuch ruled against in a court case, made a strong case against Gorsuch's Supreme Court nomination at a Senate hearing.

In a unanimous decision, the Supreme Court recently repudiated Gorsuch's ruling in Thompson R2-J School District v. Luke P. as his confirmation hearing was in progress.

Detailing the lack of adequate accommodation for his son and the family's efforts to seek justice against the school district who would not accommodate his needs, Perkins singled out Gorsuch's now overturned ruling against his child, and put it in context of Gorsuch's history of decisions against the disabled.

He concluded, "On behalf of all children disabled, typical and gifted, I urge you to deny confirmation of Judge Neil Gorsuch to the Supreme Court of the United States."

PERKINS: Mr. Chairman, ranking member Feinstein and members of the committee, thank you for the opportunity today to give voice to my son Luke, whose access to an appropriate education and thus to a meaningful and dignified life was threatened by views of Judge Neil Gorsuch.

Luke was diagnosed with autism in 1996 at age 22 months. An intensive early education program taught him letters, numbers, and colors, but he struggled with speech. He developed restricted diet, an erratic sleep cycle, and intolerance to sounds. When overwhelmed he would tantrum and often injure himself. His care became too much for my wife and me alone. His older siblings and hired caregivers helped. My parents moved next door to assist. It was clear that his education program was failing and Luke began to regress significantly. Teachers were reinforcing inappropriate behaviors and he was not participating in meaningful educational activities. Moreover, his program failed to address his profound inability to generalize. Luke might learn a skill in a particular classroom with one teacher but be unable to perform it in any other setting. While such learning might check off a box on an education plan, it provided no meaningful benefit. Multiple experts agreed that he needed an intensive program with wraparound services to address his educational needs. We made many unsuccessful attempts to address these deficiencies with the school district.

Since the needed services were not available locally, we were left with the agonizing option of sending him 2,000 miles away to a specialized school for autistic children in Boston. When Luke enrolled in Boston Higashi School at age 9, he was not toilet trained, ate only a few foods, could not sleep in a bed, could not eat with utensils, and did not interact with his peers. Within months of enrolling, Luke was toilet trained. He ate healthy foods with proper utensils. He was sitting calmly in a classroom with peers. He participated in group activities such as rollerblading. When Luke visited home during breaks, we could shop, eat at restaurants, and even attend church together.

But this improved life for Luke was costly. Despite my comfortable income as a physician, Luke's education costs rapidly depleted our reserves. My parents contributed from their retirement savings. In 2005 we requested reimbursement for Luke's education under the Individuals with Disabilities Education Act. At a due process hearing, the independent hearing officer found in our favor. The decision was upheld both by an administrative law judge and a U.S. district court judge.

But when the school district appealed to the Tenth Circuit, Judge Gorsuch authored the decision overturning these previous rulings. His legal reasoning set a new low standard of education required under IDEA as merely "merely more than de minimis." De minimis: Lacking significance or importance, so minor as to merit disregard. Judge Gorsuch felt that an education for my son that was even one small step above insignificant was acceptable.

Despite Luke's inability to meet three-quarters of his educational goals or to use any of these skills outside the classroom, his education was judged appropriate. That left us only one real option: One of Luke's parents would have to move to a school district that would much better accommodate Luke's educational needs. After much prayer and thought, my wife decided to permanently relocate.

Thankfully, the Denham school district acknowledged Luke's extraordinary needs, allowing him to finish out his time at Higashi. Now age 22, Luke will always need support in a world that still seems perplexing and threatening to him. But his quality of life after 13 years of appropriate education is vastly better than it would have been otherwise. He cooks and does household chores. He is able to shop, work, eat, and play in the community. And he has developed a new passion, Legos. Luke's mind is uniquely attuned to this plastic brick world. He constructed this particular model this January. His present life would not have been achievable without an appropriate education. Thankfully, Luke is unaware of the price paid for his education. The financial cost pales in comparison to the human sacrifice. His mother separated from her 13-year-old daughter, his parents' marriage broken. He is also unaware of the key place that one judge, with his radically restrictive interpretation of law, played in the fight for his right to a free and appropriate public education.

In his Tenth Circuit ruling, Judge Gorsuch eviscerated the educational standard guaranteed by the IDEA. His interpretation requires that a school provide an education to a disabled child that is just above meaningless. His minimalistic interpretation of federal law in Luke's case has been used to deny an appropriate public education to countless other disabled children in the Tenth Circuit over the last nine years. Legal philosophy and case law aside, such an interpretation clearly fails the common sense test. Why would Congress pass a law with such a trivial intent and why would a parent settle for an education for any of their children regardless of their abilities or challenges? To quote Chief Justice Roberts from yesterday's Supreme Court ruling: "When all is said and done a student offered an educational program providing merely more than de minimis progress from year to year can hardly be said to be offered an education at all."

On behalf of all children disabled, typical, and gifted, I urge you to deny confirmation of Judge Neil Gorsuch to the Supreme Court of the United States. Thank you for providing me this opportunity, and I ask that my full statement be included in the record. I look forward to answering your questions.