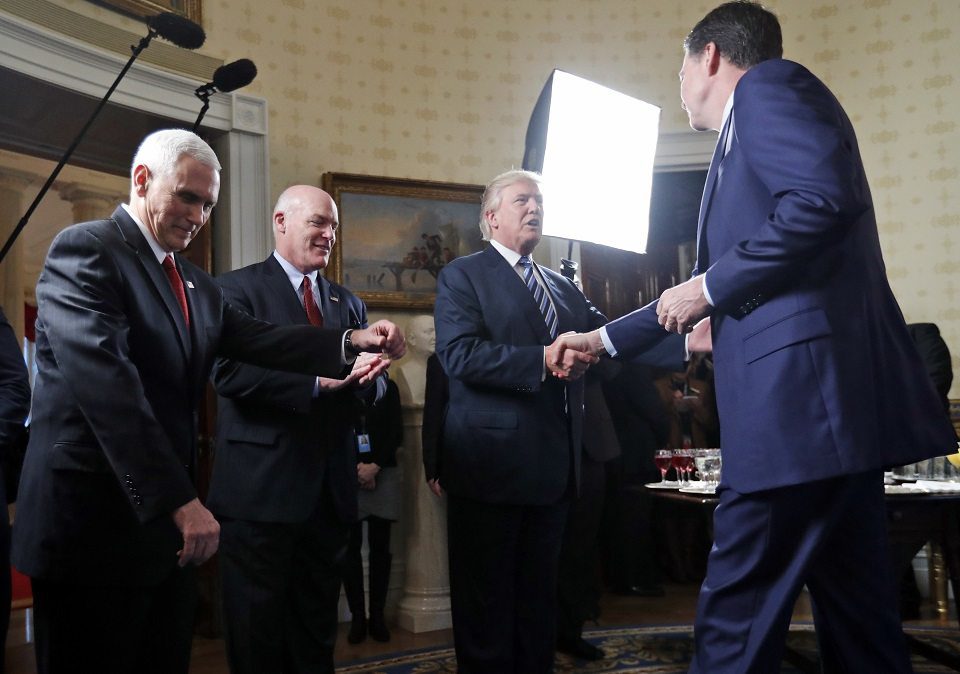 The Trump administration is rightly being excoriated over revelations that they tried to pressure the FBI into refuting a story about communication with Russia. But if the White House's version of events is true, the FBI is an equal partner. Now more than ever, a special prosecutor is needed to get to the truth.

Donald Trump's White House is desperately trying to spin its way out of a bombshell CNN report which revealed that the administration tried to lean on the FBI to refute a story about Team Trump's contacts with Russia, but succeeded only in deepening the scandal.

The timeline for this current scandal is important, because it reveals both the FBI's culpability and the White House's chronic dishonesty.

This past weekend, White House Chief of Staff Reince Priebus was sent out to the Sunday shows to refute The New York Times' reporting, and although his claims were embellished as the day wore on, he initially stated only that a high-level intelligence source told him that reports of "constant contact" were "grossly overstated":

The New York Times, last week, put out an article with no direct sources that said that the Trump campaign had constant contacts with Russian spies, basically, you know, some treasonous type of accusations. We have now all kinds of people looking into this. I can assure you and I have been approved to say this — that the top levels of the intelligence community have assured me that that story is not only inaccurate, but it’s grossly overstated and it was wrong. And there’s nothing to it.

In all of his appearances, Priebus took pains to explain that he was authorized to disclose what this "top intelligence official" said to him, without revealing his name, yet continued to embellish what was allegedly said to him.

I have expertise on this matter. Push back on an FBI investigation of the White House is better known as a COVER UP: https://t.co/SODcPzEMna

The CNN report prompted blistering pressure for an independent investigation, and not just from Democrats:

It's clear: Americans deserve an independent investigation into Russia's involvement with the Trump camp & Sessions must recuse himself. https://t.co/QpjGiuLuPr

If conflicts of interest in the executive and Congress keep impeding proper investigation of Russiagate, we'll need an independent inquiry. https://t.co/Hf5Voc6rUu

So can we have a proper independent investigation *now*?

An independent investigation into Russian-@POTUS campaign activity is essential after @Reince45 tried to influence the FBI. #TrumpRussia

The real scandal, though, is that not only did the White House try to influence the FBI to prejudice their own investigation — they appear to have succeeded.

As constitutional law professor Lawrence Tribe noted in an interview with ThinkProgress, what Priebus did was at the very least unethical, and potentially an obstruction of justice:

“[I]t could well be attempted obstruction of justice, and it’s certainly so unethical that it would be a firing offense for a chief of staff in any White House that respects the rule of law,” Tribe said.

Federal law prohibits any communication that “endeavors to influence, obstruct, or impede, the due administration of justice.”

In attempting to side-step this scandal, however, the White House managed to implicate the FBI. On Friday morning, the White House held a "background briefing" on the report (from a pool report, via email from The White House, emphasis added, misspellings in original):

Major pushback on FBI-White House story. The 'tick-tock' starts with 7:30a meeting at WH 2/15 on unrelated intel issue conducted by Reince Priebus. FBI assistant director Andrew McCabe for 5 mins after meeting. At the one on one, McCabe said 'I want you to know story in NYT (in FBI investigating contacts between Trump campaign people and Russian intel) is BS.' (Some question whether he said bullshit or simply BS although officials best recollection is 'bullshit.') Preibus asked 'what can we do about this?' McCabe demurs and says he'll get back to Preibus. Preibus' can concern is he's 'getting crushed' on the story. 'What an I supposed to do?'

Later on, McCabe calls back and tells Preibus theFBI can't say anything. 'We'd love to help but we can't get into the position of making statements on every story.'
Preibus asked if he could cite 'senior intelligence officials' as saying there's nothing to the NYT story. McCabe says yes. Later on, FBI Director James Comey himself calls Preibus and reiterated much the same thing -- story BS but can't put out statement.

That the disclosure was made "on background" does not change anything; it was as much on the record as the above "background briefing." What the disclosure did do, however, was to allow Priebus to embellish, and potentially lie about, the nature of that disclosure.

There are reportedly six intelligence agencies investigating Trump and his associates' contacts with Russia, and with this revelation by the White House, the FBI has proven itself a hopelessly prejudiced member of that task force.

More than ever, this episode highlights the need for an independent investigation headed by a special prosecutor, and a complete recusal by the Trump Justice Department and the FBI.