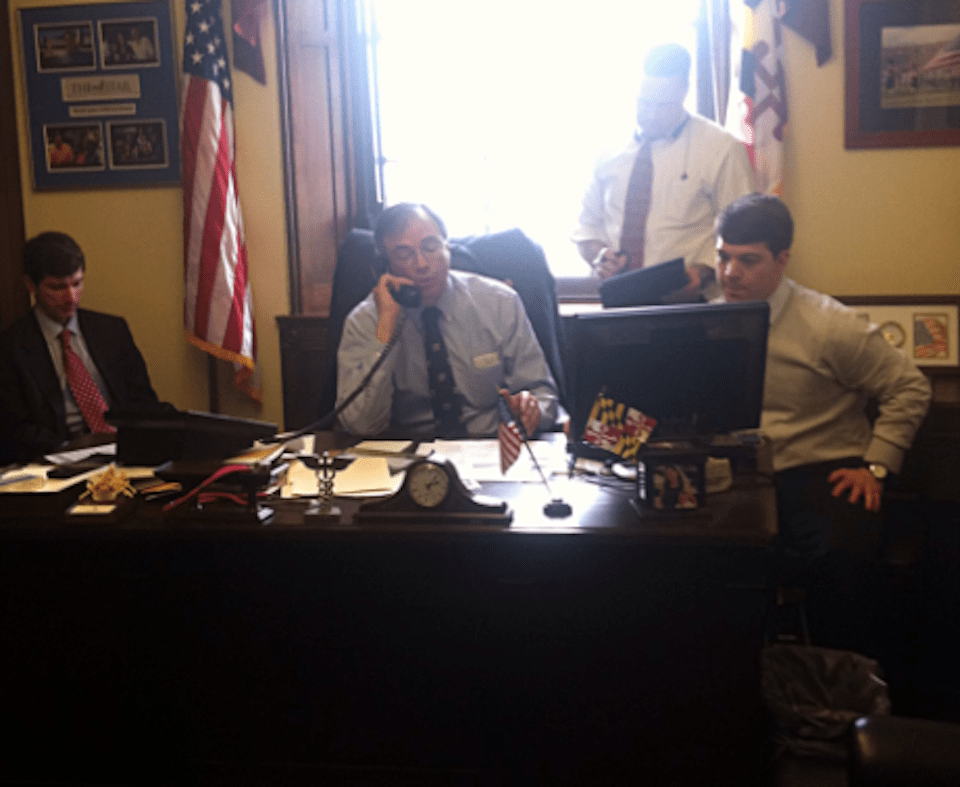 Maryland Rep. Andy Harris had a bad time facing push back from the resistance the last time he held a town hall, so now he is retreating and literally phoning it in, holding a "telephone town hall" with handpicked constituents.

After his last disastrous town hall, Rep. Andy Harris (R-MD) has announced he will not be facing his constituents face to face during the next congressional recess.

Instead, Harris "will hold a telephone town hall to answer questions and hear the concerns of constituents living in Baltimore, Carroll, Cecil, and Harford Counties," according to a press release. Harris' office also explained that constituents will be selected by his staff, perhaps to ensure that Harris does not have to answer any uncomfortable questions.

The change in how he will handle town halls with his Maryland constituents comes after Harris faced a hostile crowd at his last such event. The moment drove Harris to threaten participants, telling one woman, "Ma’am, if you yell one more time like that …"

Harris is a member of the extremely conservative "Freedom Caucus" faction of House Republicans, and he voted in favor of the health care repeal bill backed by Donald Trump and Speaker Paul Ryan, which would strip health insurance from over 20 million Americans. He is the only Republican in Maryland's congressional delegation.

Harris ran in 2010 on a platform of opposition to Obamacare, and remains a steadfast opponent of accessible and affordable health care — for his constituents, at least. When he was first elected, Harris whined that it was taking too long for his government-subsidized health care plan to kick in, and brought it up during an orientation session for freshmen members of Congress.

Democrat Allison Galbraith recently announced that she will be challenging Harris in the 2018 election. She credits Obamacare with making her business viable by making rates affordable. Her campaign is based on opposition to the Republican health care bill.

She also released a YouTube video attacking Harris for his support of the Trump-Ryan bill. The district is heavily Republican, and Harris won his last election in 2016 with 67.8 percent of the vote.

Harris is not the only Republican who is trying to avoid constituents by holding telephone town halls instead, according to USA Today, but it's not necessarily a wise move for representatives afraid to answer for their votes to repeal Obamacare. It  instead "underscores the party’s precarious political position on health care and peaking civic activism by progressives."

Republicans — even those in extremely safe districts like Harris — are feeling the heat from the resistance. They know the health care bill is extremely unpopular, and they know they are going to be taken to task for backing the Trump-Ryan agenda.

Instead of defending their terrible attacks on health care, they're trying to run away and hide.