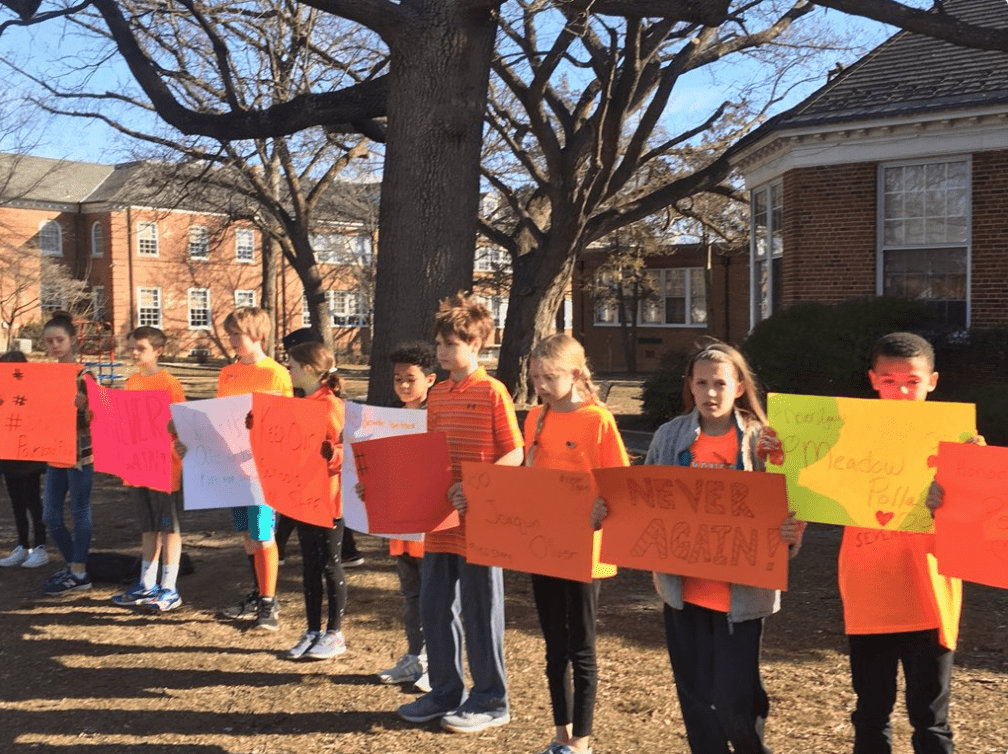 Lois Beckett/Twitter
Get The American Independent in your inbox

"Just the sensation that we are going to make a difference makes me feel proud," said one student during the walkout.

As tens of thousands of students across the country filed out of their classrooms to join the National School Walkout, a massive protest organized to raise awareness about gun safety, some of the youngest participants were found in Alexandria, Virginia.

There, 10- and 11-year-olds organized a mid-morning walkout and then staged a silent die-in in front of George Mason Elementary School. The protest was to honor the students and teachers murdered last month in Parkland, Florida, and to demand action on guns.

Documented on Twitter by Guardian reporter Lois Beckett, the Alexandria demonstration highlighted just how deep the concern for gun safety is among American students today, and that the passion is felt even in elementary school hallways.

Naomi is co-organizing a walkout at her elementary school with morning with Carter, who is also 11. “Some parents have felt that we’re not old enough to know about it,” Carter said. “Like they think because we’re 5th graders we don’t know anything about what’s happening.” pic.twitter.com/RSty6cH7VY

The event lasted 18 minutes — one minute in memory of each Parkland victim, plus an extra minute for Courtlin Arrington, who was shot and killed last week inside a Birmingham, Alabama, classroom.

"Everyone thought it would be a good idea,” to add a minute to honor Arrington, a student organizer said. "She was studying to be a nurse. She could have saved peoples lives.”

More than 65 students walked out.

Elementary school walkout in Alexandria, Virginia. More than 65 kids, and they are totally silent. Look at those faces. pic.twitter.com/ThyzDtyGo5

It is freezing cold and these 60+ elementary school protesters are lying completely still, and no one is making a sound, just the posters flapping a little over their bodies. Alexandria, Virginia. pic.twitter.com/6OI0GHbdQN

Earlier this month, several George Mason students spoke at a townwide meeting on the topic of gun safety.

"The day after the shooting, I was watching TV and what went through my mind was, ‘again,’” said Henry Gibbs, according to a Washington Post report. “You can walk into a store and buy something that can kill many people. I think that’s just wrong."

The Alexandria school community was unexpectedly thrust back into the gun safety spotlight on Tuesday when a school resource officer at a local middle school accidentally discharged his gun inside the building.

Nobody was injured. But the event only raised more questions about the illogical White House plan to flood schools across the country with guns by putting them in the hands of educators.

Heading to school this morning, one 10-year George Mason activist said he was excited about the day: "Just the sensation that we are going to make a difference makes me feel proud."