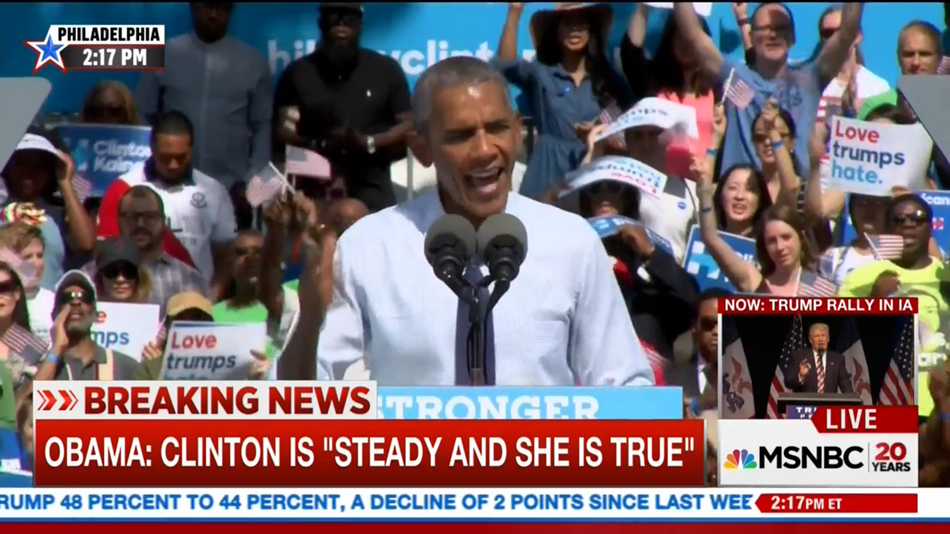 Few people dispute Barack Obama's ability to deliver a great speech. He did that and more for Hillary Clinton, speaking with passion and conviction to a crowd in Philadelphia. The highlight was an extended riff on the incessant, unfair attacks against her.

President Obama made a powerful case for Hillary Clinton, tearing into the double standard she faces:

I sure do get frustrated with the way this campaign is covered. I'm just telling the truth. Guys in the back [reporters], I'm just telling you the truth about how I feel about this. Do you mind if I just vent for a second? You don't grade the presidency on a curve. This is serious business. And when we see folks talking about transparency ... you want to debate transparency? You've got one candidate in this race who's released decade's worth of her tax returns. The other candidate refuses to release any at all. You want to debate foundations and charities? One candidate's family foundation has saved countless lives around the world. The other candidate's foundation took money other people gave to his charity and then bought a six-foot tall painting of himself.

We cannot afford to suddenly treat this like a reality show. We can't afford to act as if there's some equivalence here. To be president, you have to do your homework and know what you're talking about and you've got to apply steady judgment even when things don't go your way. You have to be able to handle criticism without taking it personally. Just brush it off, done. And that's something I learned, and that's what Hillary learned as a Senator and Secretary of State and as a First Lady. Yes, she's got her share of critics like I do, and she's been caricatured by the right and the left. She's been accused of everything you can imagine and has been subjected to more scrutiny and what I believe is more unfair criticism than anybody out here. And she doesn't complain about it. And you know what, that's what happens when you're under the microscope for 40 years. But what sets Hillary apart is that through it all, she just keeps going. And she doesn't stop caring and she doesn't stop trying. And she never stops fighting for us.

This is President Obama at his best, making a compelling and heartfelt case for his friend and the person he hopes will succeed him.