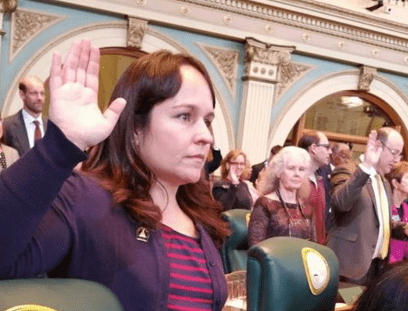 Faith Winter campaign
Get The American Independent in your inbox

Republicans have been blocking key bills for years.

Colorado Democrats for years have been passing commonsense progressive legislation through the state's House chamber, only to be thwarted by GOP obstruction in the Senate.

Now, with a definite prospect of flipping the state Senate in November, there's a chance those key pieces of legislation, including a family leave bill and crucial gun safety legislation, could finally be freed out of committee and sent to the desk of a Democratic governor.

The unfolding Colorado Senate race is among the most closely watched state legislative contests in the country. It finds Republicans on the defensive in a Mountain West state where voters are moving to the left, and a state where Trump is not a popular figure. (Sensing vulnerability, the billionaire Koch brothers are trying to bail out local Republican candidates with an infusion of cash.)

Democrats are likely to retain control of the Colorado House in November, and stand a good chance of maintaining the governorship. If they're successful flipping the Senate, it would give the party a trifecta.

"This is a potentially very big moment — not necessarily a permanent one, but one that for the next few years could dramatically change the landscape in terms of what state government can do,” Colorado State University political professor Robert Duffy recently told the Denver Post.

Among those closely watched candidates is Faith Winter, who has been sponsoring state-funded family leave legislation for several previous sessions, where it passes the Democratic House and then gets shelved in the GOP Senate.

The Democratic plan aims to create a statewide fund for paid family leave benefits for working Coloradans who face a long-term illness or who are caring for a sick family member, a newborn or newly adopted child.

Another key piece of legislation that's bound to return next session is a so-called "red flag" bill.

Designed to curb gun violence by allowing family members to petition a court for an emergency order to take away guns from someone who is believed to be a danger, the bill passed the Colorado House last session.

The issue took on added urgency when a man with a known history of mental illness in Douglas County opened fire on Colorado police officers when they responded to a call at his apartment. Three officers were injured and one was killed in the ambush-style attack.

"When the red-flag bill got to the Senate, it was promptly assigned to the GOP-controlled State, Veterans, and Military Affairs Committee, where it was postponed indefinitely," the Colorado Springs Independent reports.

Indeed, the State, Veterans, and Military Affairs Committee is known to Denver's capitol insiders as the "kill committee." In the Senate, it's where Republicans send bills that they don't like, knowing the committee's three Republican members will simply vote them down, with little or no public debate.

Another Democratic bill that regularly dies in the GOP Senate is one that bans conversion therapy, the widely discredited practice of trying to change a person’s sexual orientation or gender identity.

Eleven other states, plus the District of Columbia, have already outlawed the bogus practice.

If Colorado Democrats flip the Senate, that state might soon become the 12th.