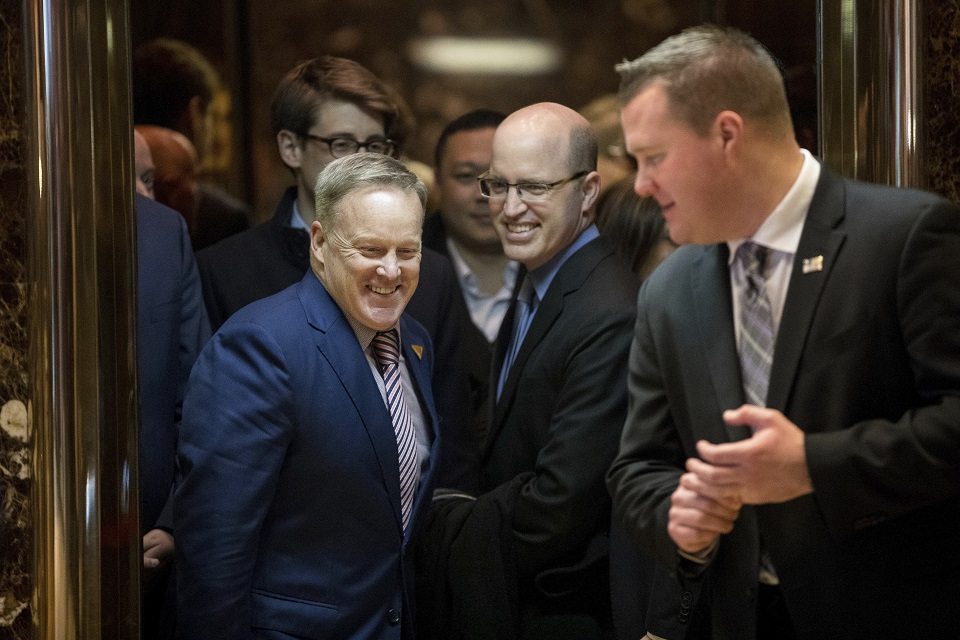 On the heels of the Donald Trump White House's banishment of major media outlets from a press briefing, and Trump's subsequent announcement that he will be skipping the White House Correspondents' Association (WHCA) Dinner, the president of the WHCA has made it clear that he intends to do nothing in response.

Donald Trump's assault on the free press came to a head last week when Press Secretary Sean Spicer canceled a televised briefing, and excluded major media outlets from the off-camera briefing that took its place. Notably, all of the banned reporters were with outlets which had done heavy reporting on the Trump/Russia connections that prompted this panic in the first place.

Then, Trump announced that he would be skipping the White House Correspondents' Association (WHCA) Dinner, which his spokesperson freely admitted was a reaction to "tension" with the press.

Several reporters boycotted Spicer's off-camera briefing, but their leader, WHCA President Jeff Mason, has responded to this outrage with praise for Trump and his administration. In an interview with MSNBC's Morning Joe, Mason not only spoke well of the Trump White House's relationship with the press, he then re-extended an invitation to the dinner that Trump has spurned:

MASON: The Correspondents' Association has worked very hard this year to build a constructive relationship with the Trump White House. And I think in many ways we have succeeded. And we would have liked to have showcased that at the dinner. That doesn't mean — this comes in the context of very, very negative rhetoric coming from the president of the United States. But it's important, I think, for viewers to know that despite that rhetoric, we have worked well with the Trump White House. We have had many opportunities for journalists to ask questions of the president, and of his press team. And those things count, and those things are also things we would have and will celebrate at this dinner.

BRZEZINSKI: Your reaction to the president saying he is not going?

MASON: Well, I was surprised. I was surprised that we hadn't had chance to even really talk about it, except in passing a couple times over the last month. You know, we have been focusing on a lot of major challenges between the press and the White House and the dinner is, you know, not been at the top of our list for that.

MASON: But we are planning that dinner. We are working very hard, and we are going to have that dinner. And if the president changes his mind, he is still welcome.

Having on-camera briefings is not praiseworthy — it is simply part of the job of running the country. And Spicer's briefings have largely been petulant and lie-ridden. Trump's press conferences have been similar affairs at which he either takes questions from Trump-friendly outlets only, or is openly abusive to reporters, and just as openly lies to them.

As for the dinner, it might have been too much to expect the WHCA to simply rescind the invitation permanently, but volunteering a second invitation on the heels of Trump's conduct is tantamount to endorsing it.

When asked directly about Spicer's conduct last week, Mason again praised Spicer for doing the bare minimum requirements of his job, and reacted mildly to the banishment of his member reporters:

MASON: The Correspondents' Association objected be to what happened on Friday where certain news organizations were not included in the press gaggle or briefing. We have been in talks with them about that, and we will be working hard to make sure that something like that doesn't happen again.

BRZEZINSKI: If it does, what are your — how would you characterize the problem?

MASON: Well, I guess the first thing I would say, Mika, is I want to put it in the larger context of what has happened during this first month. During the first month, Sean Spicer has been briefing regularly from the briefing room and on television, and that is what we asked for. And so that is important not to forget. The fact that they did not include a bunch of organizations on Friday is certainly a concern. And, of course, it comes in the context of president Trump saying things like the fact that he believes the media is the enemy of the American people. We absolutely do not believe that. The media is a critical part of a U.S. Democracy and those are the values we are fighting for. If this happens again then we'll have to talk about it with our members about how to proceed, but I'm hoping we get the message across, and I'm hoping the White House realizes, as well, that it's not in their interest, just as it's not in the interest of a free press.

The WHCA has never been a particularly activist organization, but they did manage a far more robust response to a much more minor slight during the Obama administration, when Fox News was excluded from a round-robin interview with a minor administration official.

Hopefully, their more courageous members will force the WHCA to hold Trump accountable. The American people are counting on the press to fulfill their adversarial function, not to maintain a "productive relationship" at all costs. When George W. Bush is a more forceful defender of press freedom than the WHCA, it is clearly time for a reassessment.