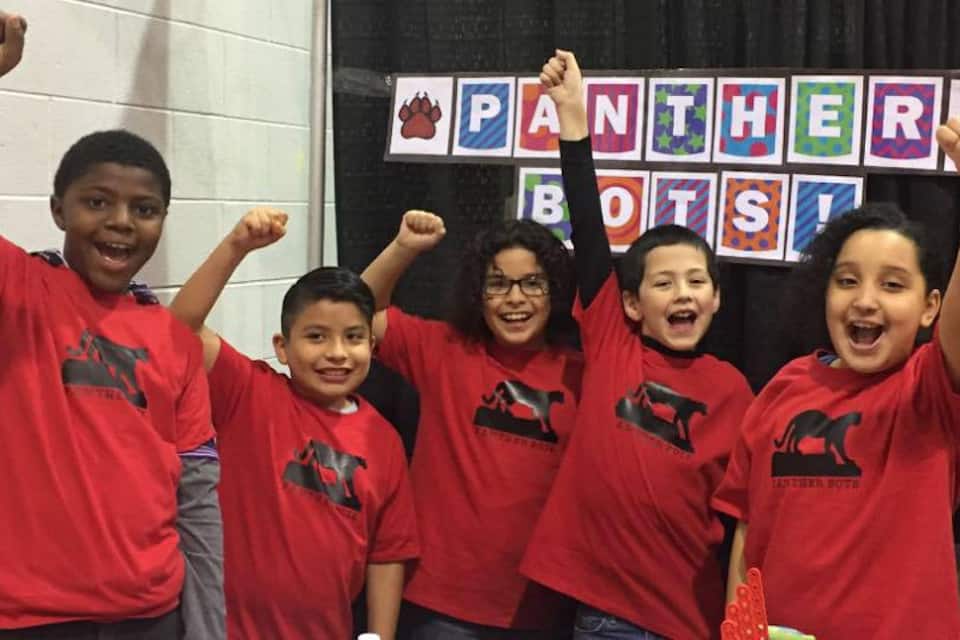 Nicole Oliver/GoFundMe
Get The American Independent in your inbox

The Panther Bots, a team of fourth-grade Hispanic and Black students, easily crowdfunded the money to take their robotics skills international after a racist heckling incident made the news.

After two years of Donald Trump normalizing hatred of Hispanics, first as a candidate and then as president, harassment and demonization of people for their Latin heritage has become commonplace, and even children are not immune.

A team of fourth-graders called the Panther Bots stole the show in a robotics competition at Pleasant Run Elementary School in Indianapolis, winning a spot at the Vex IQ Robotics State Championship by demonstrating a machine made of LEGO bricks. The team consists of Elijah Goodwin, Angel Herrera-Sanchez, Jose Verastegui, Manuel Mendez, and Devilyn Bolyard. The students are all Hispanic or Black, aged nine and ten, and come from a Title I school in low-income part of town.

Parents and students started heckling the Panther Bots from the crowd as they took the lead in the competition. According to Herrera-Sanchez's mother, one person yelled, "Oh my God, they are champions of the city all because they are Mexican." Later in the parking lot, the Panther Bots were surrounded by angry throngs telling them to "Go back to Mexico!"

If the racist hecklers wanted to deny these minority kids a platform to show off their engineering talent, their plan failed spectacularly. Three weeks later the undeterred Panther Bots won a Create Award at the state competition and are heading to the Vex IQ World Championship in Louisville, KY.

Elijah had some choice words for the people who harassed him and his friends:

They yelled out rude comments, and I think that they can talk all they want because at the end we’re still going to Worlds. It’s not going to affect us at all. I’m not surprised because I’m used to this kind of behavior.

What is more, a GoFundMe campaign to pay for travel costs and materials for their championship project was a massive success, quickly meeting and exceeding the $8,000 goal.

Here are some of the comments left by sponsors on the GoFundMe page:

MARY ATTEBERRY: Way to go, Panther Bots! Keep up the interest in robotics and don't let anyone tell you that you aren't worthy. You have earned your success!

YALINDA MEZA: I read your article. It moved me so much. As a minority, Mexican American, I could imagine the obstacles we must face with all the rhetoric going around these days. My best friend is African American. Your team simply reminded me of us. Keep up the good work and I wish you all the success!

NICK BLOZAN: Panther Bots, I read your story in USA Today and I celebrate your success in robotics. Pay no attention to the haters of this world. They are NOT the majority. Keep up the great work and one day you will be highly paid engineers. We are rooting for you in California!

In spite of everything Trump has done to demoralize minorities and tell them they are not worthy or valuable, kids like the Panther Bots are fighting back with their minds. It is incredible that being gifted at STEM should be seen as a subversive act coming from Hispanic and Black children, but if it is, the Panther Bots are unafraid to subvert.

If kids like these are the minds of the future, then the future is in good hands.