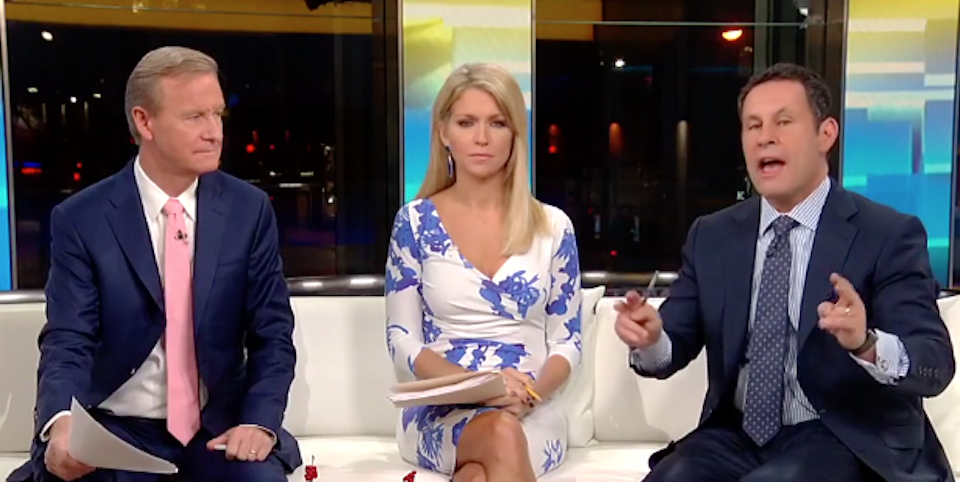 Fox News doesn't think Americans should be asking about how four U.S. soldiers died in Niger.

The doomed raid in Niger has been at the top of minds across the country, especially after Trump decided to attack the widow of Army Sgt. La David Johnson, Myeshia Johnson. The country is demanding to know why the soldiers were in Niger, and why they lacked the support they needed in the field.

But Fox News wants everybody to shut up about it, because it makes Trump look bad.

On "Fox & Friends," Trump's favorite show on the sycophantic network, co-host Brian Kilmeade grumbled that "it seems like people looking for some type of scandal" in the Niger tragedy. He was incredulous that Americans are asking about the far-flung deployment of troops into harm's way, asking, "I need to know how many troops are in West Africa? Really?"

KILMEADE: You have an incident happen. People want to get to the bottom of it and you have the chairman of the Joint Chiefs of Staff come forward and say this is what we know so far, we'll give you the latest. And of course, the family members need to know details as soon as we get it. And now I'm just curious why the American people need to know how many people are doing what in West Africa? It seems like now — it seems like people looking for some type of scandal. I need to know how many troops are in West Africa? Really? Just know that Al Qaeda, al-Shabaab, ISIS are fanning out there and they're doing it not for fun but in order to train others to stop terrorists from eventually coming over here.

Trump ordered the military in, even though the armed forces knew their support capability in the region was limited. Men died when carrying out orders made directly or authorized by Trump, and the administration is not being forthcoming about what happened. Even their fellow Republicans have said so.

So, to answer Kilmeade, there is an air of scandal around what happened, and while it goes against the false narrative Fox has been peddling of competent leadership, America needs to know the truth.

The directive from Fox is in line with the Trump. Despite going on and on about everything else in the world, he is tight-lipped on the Niger 4 and ran away from reporters when they asked him about it.

The argument is also unsurprisingly hypocritical for Fox, which turned its airwaves into Benghazi central for years. While independent probes showed that the failures in security at the U.S. consulate were not the result of deliberate action by President Barack Obama and Secretary Hillary Clinton, that didn't stop Fox from hyping the story constantly.

Yet now that there are real questions about Trump and his role in the deaths of four Americans, the Republican Party's in-house propaganda outlet wants everyone to shut up about it.

That is unlikely to happen.