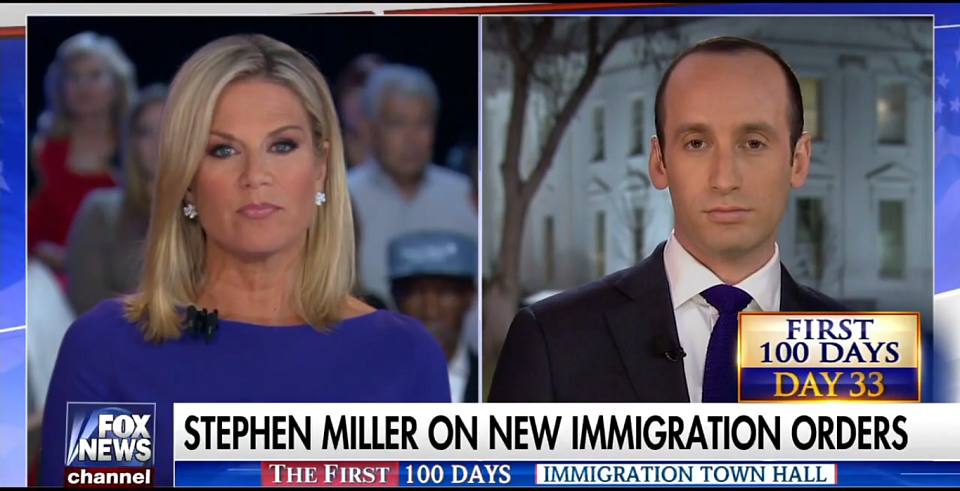 Senior White House Adviser Stephen Miller, who recently declared that Donald Trump's power "will not be questioned," got a hard lesson from yet another media figure that conservatives trust when Fox News anchor Martha MacCallum was forced to school him on our democratic system of checks and balances.

When asked what the difference would be between the original order, which had a clear discriminatory intent, and the new one, Miller described the revisions as "minor" and "technical," and said that the new order would have the "same basic policy outcome."

This led anchor Martha MacCallum to wonder how the Trump administration could expect a different outcome, when 48 courts rejected the first order:

MACCALLUM: Grant Bershad is 18 years old, but he wants to know, specifically, how the second order is going to be different.

MILLER: Well, one of the big differences that you're going to see in the executive order is that it's going to be responsive to the judicial ruling, which didn't exist previously. And so these are mostly minor technical differences. Fundamentally, you're still going to have the same basic policy outcome for the country, but you are going to be responsive to a lot of very technical issues that were brought up by the court. And those will be addressed. But in terms of protecting the country, those basic policies are still going to be in effect.

I want to try and broaden the conversation here, and not get lost in all this technical minutia. Here is the reality: The United States admits more people than any other country on the face of the Earth. We've got a serious problem in our country of terrorism, radicalization, and serious problems of people joining ISIS, joining terror groups, joining al Qaeda, and committing, or attempting to commit acts of crime and terror against our nation. We have seen a huge nexus —

MACCALLUM: It raises the question, let me jump in on you there for a moment. Let me have — because here is one of the problems. I know you think the order was fine the way it was issued initially. But courts disagree. In fact, 48 courts took issue with it, and that's why it is halted right now, as a result of that process that happens in this country. So, now, you are about to issue another order, and one of the things that would need to be addressed, it sounds like, is proving that the seven countries that you have targeted are indeed the right ones to target, and that you have merit and reason for targeting those specific ones, rather than, say, Saudi Arabia, right?

Miller's declaration that the changes to the new EO would essentially be cosmetic could severely hamper its chances for success in court, and as MacCallum pointed out, would do little to address the central flaws of the original order. That point was underscored when Miller offered, in response to MacCallum's question, the exact same rationale that failed with the original order.

In fact, this White House is so loathe to change course on their discriminatory Muslim ban that they are not even going to rescind the original order once the new one is enacted, according to White House Press Secretary Sean Spicer:

REPORTER: One more clarification just before you go. So, when the new EO comes out, you won't rescind the original one and you'll leave it in place?

The fact that the White House will not rescind their original order, along with Miller's blunt admission that the new order will be a cosmetically tweaked version of the old one, will make it difficult for any court to believe that there is any substantial difference in the discriminatory intent of the two orders.

More than that, though, they illustrate the arrogance of an administration that views the judicial branch of government — a major pillar of our democracy — as a proverbial wall that you can throw things against to see if they will stick.