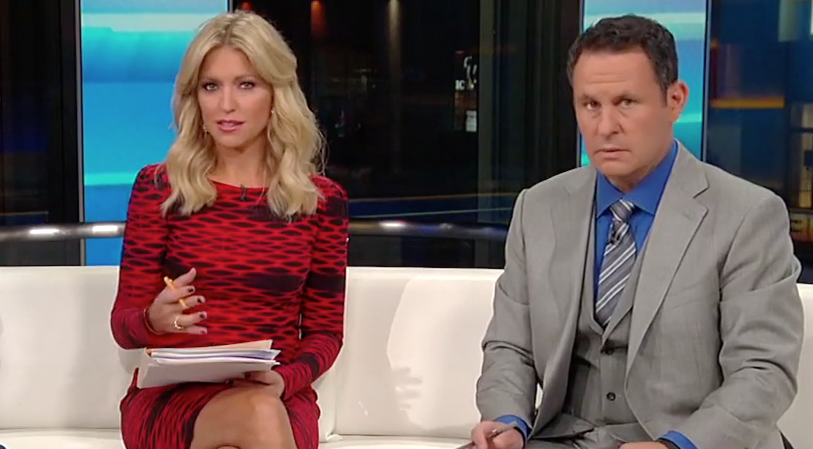 Launching into damage control mode, Fox News tries to save Trump from his offensive phone call to a grieving Army widow Tuesday night.

Desperately trying to clean up the burgeoning scandal surrounding the ISIS ambush in Niger that killed four Americans two weeks ago, made even worse Donald Trump’s stunningly insensitive response to it, Fox News simply fabricated the latest chapter in the story in attempt to save Trump’s reputation.

Trump stunned observers Tuesday night when he reportedly, and belatedly, called Myeshia Johnson, the widow of Sgt. La David Johnson, who was en route to meet her husband’s remains at the Miami airport.

But instead of simply offering words of sympathy, he reportedly told the young, pregnant widow that her husband "knew what he was signing up for" when he joined the military.

The call was first reported by Rep. Frederica Wilson (D-FL), who was with the Johnson family and heard the call on speakerphone.

On Wednesday morning, Trump lashed out at Wilson, saying she "totally fabricated" details of the call. Cowanda Jones-Johnson, mother of the slain soldier, later confirmed that Wilson's description was "very accurate."

But Trump's allies at Fox News, led by Ainsley Earhardt, took a different approach. They simply rewrote the phone call script and improved upon what Trump reportedly told the widow, while suggesting that the young woman should be grateful for Trump’s time and attention.

EARHARDT: So this representative, this Democrat down in Florida, said she was in the car — I believe it was in the car or she was listening on the speakerphone with the wife down in Miami. And she said that the president was insensitive when he called to say, "I'm sorry your husband died fighting for our country."And she said he framed it wrong, he said that comment, she was really offended by it. My response to this was the president of the United States of America called to say, "Thank you for your service. I'm sorry for your sacrifice." That in it of itself is extremely special that the president of the United States picked up the phone to call these families.

Note that there is no report that Trump said, "Thank you for your service. I'm sorry for your sacrifice." If he had done what any normal person in his position would have done, this wouldn’t be an issue. Instead, Trump pointedly failed to offer up his sympathies, or offer his respects.

Fox’s Earnhardt then added insult by claiming Trump’s time is so valuable that it’s “extremely special that the president of the United States picked up the phone” to call the widow.

According to Wilson, when Myeshia Johnson ended her jarring phone call with Trump, she was sobbing. She said Trump could not remember her husband's name.

On Wednesday morning, after Trump all but dared the grieving family to call out his lies, Jones-Johnson did just that.

Nothing Fox News says about the phone call is accurate. None of it.