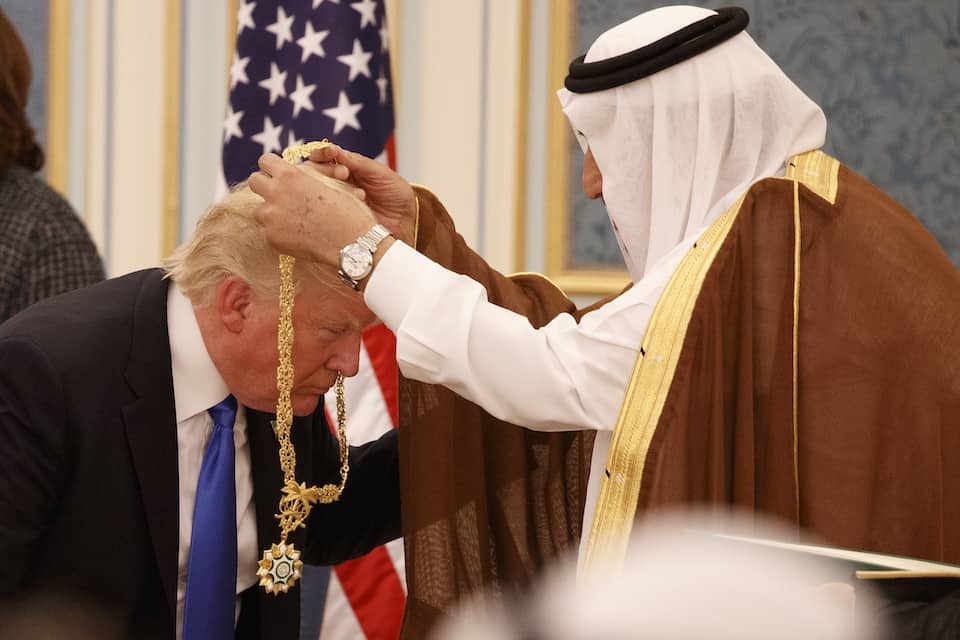 Donald Trump has just kicked off his first international trip as president, and it is already turning into quite a cringe-worthy spectacle.

Donald Trump made the unusual decision to spend his first 100 days in office traveling not to visit foreign leaders but to promote his own golf courses in the United States.

Now, Trump is on his first international trip as president, in a journey that is ripe with potential for Trump to further embarrass himself and America on the global stage.

Trump's first stop is in Saudi Arabia. Given all of his rhetoric and threats to be much tougher on the Muslim world than President Barack Obama was, one would not expect Trump's visits to be especially friendly.

Fox News certainly did not expect it, already praising Trump with its very Foxish headline: "Trump shakes hands with Saudi leader, doesn't bow as Obama appeared to do."

According to Fox, "Videos show Obama bending at the waist toward the king," which was "a move interpreted as American weakness."

Trump himself had promised that if he were president, he certainly would not bow to other leaders.

So you really have to wonder what Fox would say about Trump not only bending at the waist to receive a gift — of gold, of course — but also curtsying afterward:

I think 2016 Trump would be embarrassed by 2017 Trump doing a curtsy.?pic.twitter.com/LTfMu0gXYT

This certainly seems like a far cry from the tough-talking candidate who vowed to make other countries fear him, especially in the Muslim world. During the election, Trump insisted he would "bomb the sh*t out of" ISIS and "take their oil" — presumably, from any Middle East countries in which there is oil to be found, including Iraq.

However, a draft of Trump's major speech in Saudi Arabia indicates a much softer tone. Despite years of criticism by many Republicans, including Trump, that Obama was incapable of effectively fighting terrorism without invoking the magic words "radical Islamic terrorism," Trump's speech does not include that phrase.

Trump also does not intend to criticize human rights abuses in the region either. According to the Associated Press:

Unlike the Obama administration, which distanced itself from authoritarian leaders and took a moral stance against the human rights violations that in many cases fueled resentment and extremism, Trump is focusing on deal-making. Only in the case of Iran does his speech advocate for the “longest-suffering” people who are subject “to their leaders’ reckless attempts to dominate their neighbors.”

The nations that will be hosting Trump do not show any sign of intimidation by the blustering bullying president either. Saudi Arabia will be placating Trump's infamously picky palate by offering him well-done steak and ketchup at its dinner, along with traditional cuisine.

Meanwhile, Trump's aides and foreign delegations are so concerned about how badly Trump's travels could go that they are consciously scheduling plenty of "down time" for him, and preparing "lots of visual aids" to help him understand the complex issues and relationships involved in his first trip.

On Trump's very first day, he has already become a laughing stock on the internet for his bow and curtsy in Saudi Arabia. Even his wife and daughter Ivanka, who are traveling with him, have added to Trump's humiliation by deciding not to cover their heads — something Trump strongly criticized Michelle Obama for when she was first lady.

Trump still has a trip to Israel on his agenda as well, at least for now. It is incredibly awkward, considering Trump recently enraged the country by sharing its top secret intelligence with Russian officials during a meeting last week in the Oval Office.

It is almost too terrifying to imagine what will happen next on Trump's travels abroad.