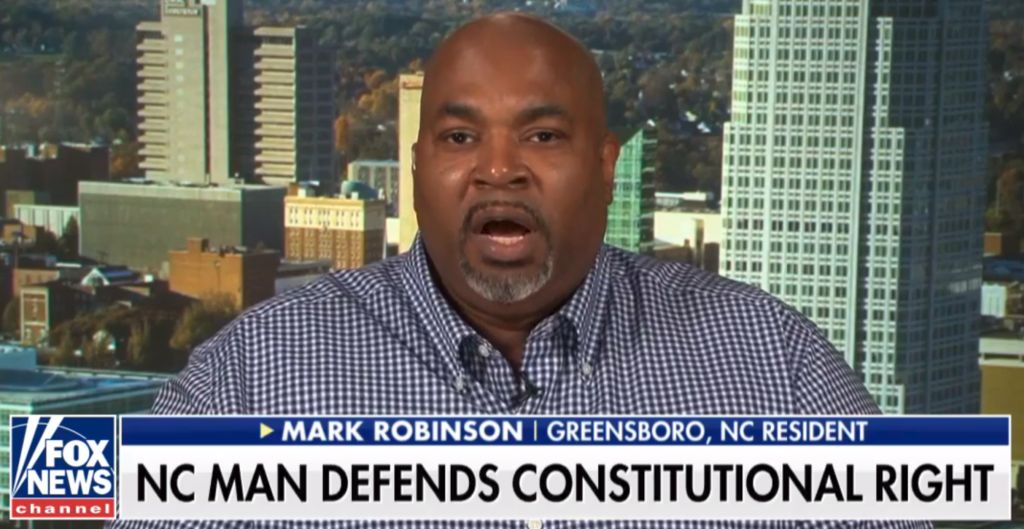 Everyone on the right — from Fox News to the NRA — has fallen in love with a pro-gun rant from unhinged conspiracy theorist Mark Robinson.

Fox News and the NRA are promoting a pro-gun birther pundit who says gay people are "devil-worshipping child molesters," black Democrats are "slaves," the student survivors of the Parkland shooting are "silly little immature media prosti-tots," and Michelle Obama is a man.

Fox News host Ainsley Earhardt is so impressed by him, she suggested he run for office.

Video of Mark Keith Robinson's angry rant to his city council in North Carolina has gone viral over the last few days, assisted by the right-wing media, the NRA, and even a Republican member of Congress.

But Robinson has a slew of social media posts that quickly reveal him to be an extremist with bizarre theories and a burning hatred for the survivors of the Parkland school shooting.

A quick visit to Robinson's Facebook account, where he shows off his NRA hat and touts his membership in the organization, would have exposed his strange rantings. They were not hard to find.

He believes a "big push to Marxist Socialism" is underway in America, and that "hammering of the NRA" and how stories about mass shooters are reported are evidence of this conspiracy.

Robinson wrote that "since the end of World War Two this nation has been slowly poisoned" with "the poison of the Marxist" in "school, in the news, in the movies and television, in music, and even in church."

He described the teenage activists who organized the March for Our Lives after the Parkland shooting as "silly little immature media prosti-tots" who "need to grab a passy (sic), have seat in time out, and shut up." The students are "simply making irritating noise" when they call for reforms to reduce gun violence, he claimed.

The public education system is "a bastion of perversion," in Robinson's eyes.

LGBT people receive some of the harshest attacks in Robinson's posts. He argues that "we have pushed homosexuality over the top," and "pedophilia is next" followed by "the end of civilization."

He adds, "You CAN NOT love God and support the homosexual agenda."

While expressing sympathy for the mass shooting at the Pulse night club in Florida, Robinson made sure to note that "homosexuality is STILL an abominable sin and I WILL NOT join in 'celebrating gay pride' nor will I fly their sacrilegious flag on my page."

Strangely, he also wrote, "If you make the 'duck face' when you take selfies you're gay. You may not be a homosexual, but you are VERY gay."

In his posts, Robinson repeatedly attacks President Barack Obama, describing him as a "worthless, anti-American atheist" who wanted to make America a "European style socialist hell hole." He also posted a meme claiming that Obama "entered the White House with a fake birth certificate."

He uses the male pronoun to refer to Michelle Obama, echoing a conservative theory that she is male.

"I'll be glad when he takes his boyfriend and leaves the White House," he wrote of the former first lady.

Robinson asserted that "half of black Democrats don't realize they are slaves."

He also expressed concerns about the success of the "Black Panther" movie. He described it as "a product that was made in the dominion of the Devil" featuring "a fictional 'hero' created by an agnostic Jew and put to film by satanic Marxist."

Robinson's moment of viral celebrity was created by the right, desperate to generate a rallying cry after losing the ongoing public debate over gun violence in the wake of the Parkland shooting.

On Tuesday, Robinson addressed the Greensboro, North Carolina, city council, which was debating whether to cancel a gun show.

"When are you all gonna start standing up for the majority?" he asked. "I'm the majority. I'm a law-abiding citizen who's never shot anybody. It seems every time we have one of these shootings, nobody wants to put the blame where it goes, which is at the shooter's feet. You want to put it at my feet. It doesn't make any sense."

Fox prominently featured the speech on its website, and on the Facebook pages for Fox News and "Fox & Friends." The video was also pushed by Rep. Mark Walker (R-NC) and the conservative Media Research Center.

Robinson's video also received the seal of approval from the NRA, which shared it on their social media accounts.

"This speech should go viral! We are the LAW-ABIDING MAJORITY who want to protect and defend our lives!" the gun-lobbying group wrote on Facebook, calling it "must watch."

#MustWatch 👀 A fed-up gun-owner in North Carolina demands answers from his elected officials as to why they refuse to stand up for the majority of their residents. #2A #NRA pic.twitter.com/F9yMPM02l0

Breitbart, the Daily Caller, and Glenn Beck's The Blaze also promoted the video, which has 11 million online views.

A day after airing the video of his speech, Fox News amplified the hype for Robinson and invited him to be a guest on "Fox & Friends." Throughout the segment, on-screen text identified Robinson as "NC Man's Passionate Defense of 2nd Amendment."

Host Brian Kilmeade praised him for being "a strong defender of the American Constitution."

Earhardt gushed to Robinson that "our audience went wild" over his speech, noting, "we got so many emails because many of them are gun owners."

Robinson described himself as being on "the solid middle" of politics and complained about "the fringes" dominating the debate.

Kilmeade said "people should reach out to you if they want you to speak to them, or to their group."

Hinting at a conspiracy, Robinson said there is "a concerted push to end the Second Amendment."

Earhardt later told him, "You're great, I really think you should run for office."

This is how the right builds up its voices. It quickly captures and amplifies a viral "moment" that echoes its message, hoping that the imagery of southern black man echoing the NRA message can help to make its case. Whether the

But the rush to push figures like Robinson often backfires. The right has a problem with continually promoting extremists who embrace odd and often dangerous conspiracies, with a dose of bigotry.

That is the case with Trump, who is a birther that slams Latinos and Muslims, or with Mark Robinson, who is also a birther and believes that gay people are working for the devil.