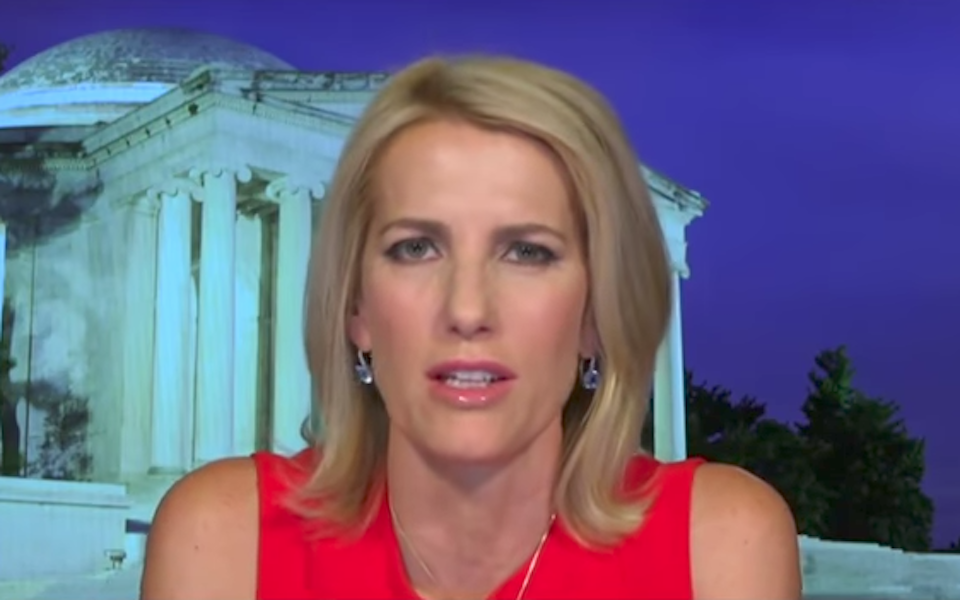 A day after being Fox News announced it was adding the fervently racist pro-Trump right-wing radio host Laura Ingraham to its prime-time lineup, she invoked the derogatory racist language that helped attract the network to her.

In a rant about mostly Latino immigration activists, Ingraham referred to them as behaving like "wild dogs" who feast on wounded animals and "crunched" their bones.

Ingraham and her guest, EWTNews anchor Raymond Arroyo, were discussing the young immigrants who protested Rep. Nancy Pelosi for her support of compromise legislation that would pass the DREAM Act, protecting young undocumented immigrants from Donald Trump's threat of deportation.

Arroyo said the protesters "descended on Pelosi like jackals over a piece of dead carrion." Ingraham jumped on the characterization and took it further. She said it reminded her of "wild dogs" surrounding a wounded impala.

"Those wild dogs ate that impala in about six minutes, including the bones," Ingraham added. "The bones were crunched."

ARROYO: That was sad. They descended on her  like jackals over a piece of dead carrion.

INGRAHAM: This was like that video that I tweeted out when I was in Botswana of the wild dogs surrounding the wounded impala. So Nancy was the impala in that video that I tweeted out — with those dogs — those dogs ate that impala. About seven or eight dogs, those wild dogs ate that impala in about six minutes, including the bones. The bones were crunched.

Comparing Latinos to wild animals is not out of character for Ingraham, and is the type of over-the-top, racist language she regularly employs when speaking about Latinos and immigration.

The Trump apologist, who demanded loyalty to him when he was a candidate, has previously claimed that Mexican immigrants "come here to murder and rape our people," slammed Spanish-language television as "toxic," and questioned Supreme Court Justice Sonia Sotomayor's loyalty to the Constitution, citing her "immigrant family background" as problematic.

The rant about immigrant activists is a sign that Ingraham will use her new, amplified spot among Fox viewers to continue spreading hate, fear, and loathing of others.