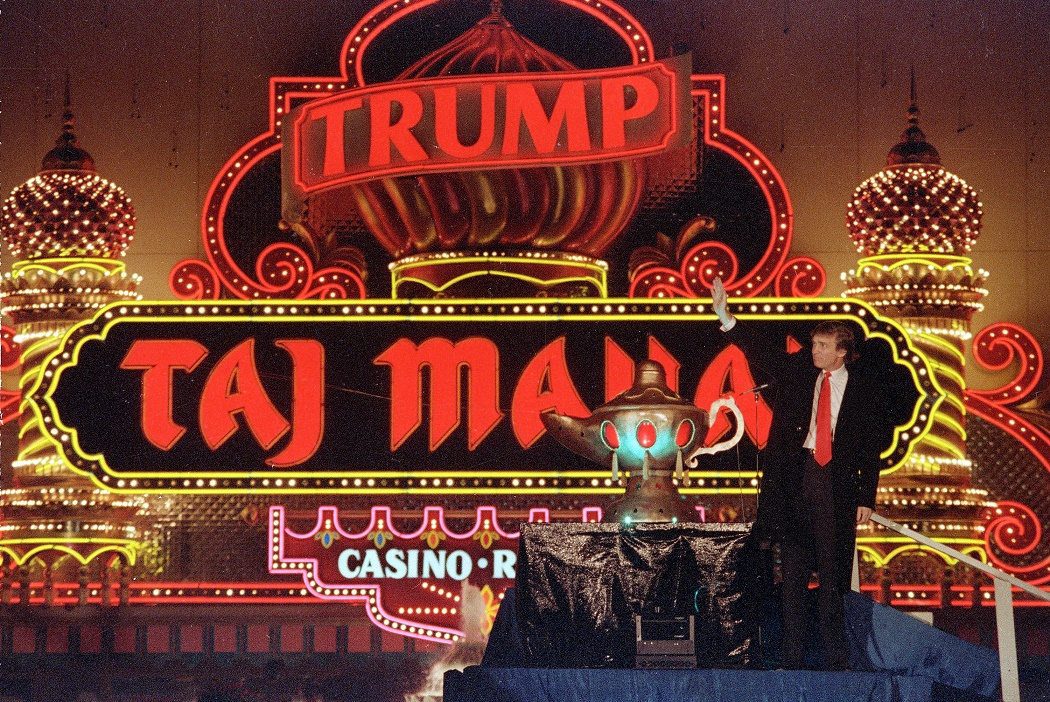 (AP Photo/Mike Derer, File)
Get The American Independent in your inbox

Donald Trump's origin story tells the tale of a scrappy kid who made his own way to a golden throne in a Manhattan penthouse with nothing more than a small, million-dollar "loan" from his father. But the reality is that Fred Trump had to help out his son much more significantly, because, as we all now know, his son is a big-time business loser.

Donald Trump is not the wildly successful businessman he has portrayed himself to be.

And following his devastatingly bad business decisions in the 1980s — many of which are detailed in this 1990 Fortune profile — Trump was obliged to turn to his father for multiple bailouts. The New York Times reports:

Mr. Trump, the Republican nominee for president, portrays himself now as a self-made man who began life with what he has characterized as a meager $1 million advance from his father. That figure itself represents a significant understatement about the support his father provided him over the years. But in his darkest moment, Mr. Trump again leaned on his family’s wealth, this time to ride out a financial tsunami.

The "financial tsunami" was caused by Trump's bad decision-making, over-borrowing, miscalculating the future of high-interest junk bonds, overextending himself with extravagant purchases, mismanaging his businesses which were losing money, and a financial recession.

By 1991, he barely had enough cash to keep up with his personal monthly expenses. So he turned to his dad.

He promised to make up for a cash shortfall with the sale of condominium units in Trump Tower in Manhattan. When that did not generate enough money, he filled the hole in his balance sheet with the “unforecasted receipt of funds from certain family-owned properties in New York City” — apparently referring to fees from properties his father, Fred C. Trump, had built outside Manhattan.

At the end of 1990, when Mr. Trump was facing an $18.4 million interest payment, his father sent a lawyer to the Castle casino to buy $3.3 million in chips and leave without cashing them, providing his son with an infusion of cash.

As BuzzFeed's Andrew Kaczynski reported in 2015, that "loan" prompted an investigation from the Division of Gaming Enforcement, who "ultimately found the loan to be illegal. In the end, Trump got to keep the money but had to pay a $30,000 fine."

“Sweeney said Fred Trump also agreed to apply for a license as a financial source, which would make another such loan possible in June, when the next interest payment is due,” a Philadelphia Inquirer story from the time read.

Fred Trump would make further payments to his son, and Donald Trump ultimately settled his debts.

All of which is to say nothing of the pivotal role Fred Trump played as "an essential silent partner," detailed by the Washington Post in March: "In effect, the son was the front man, relying on his father’s connections and wealth, while his father stood silently in the background to avoid drawing attention to himself."

Fred Trump leveraged his relationships with financiers, built over his own career in real estate, to secure financing for his son's 1978 Grand Hyatt hotel project. It was Fred Trump, in partnership with the Hyatt hotel chain, who got Donald Trump the funding from Manufacturers Hanover Bank he never would have gotten otherwise.

Fred Trump and Hyatt "jointly guaranteed the $70 million construction loan," with “each assuming a 50 percent share of the obligation and each committing itself to complete the project should Donald be unable to finish it."

Fred Trump’s signature on the guarantee ensured the new hotel would get built. “No document in the long paper trail attached to the Commodore deal better demonstrated the lack of bank confidence in the Donald or the project, and none made clear the limits of his promoter role,” Barrett wrote. Trump simply did not have the credit or connections to obtain such financing on his own. “It was Fred’s two-decade-old relationship with a top Equitable officer, Ben Holloway, that had helped entice them to do the project.”

That is an extraordinary gift from his father. And it is one that Donald Trump routinely leaves out of his personal narrative about being a self-made billionaire.

His father repeatedly set him up for success, then bailed him out when he failed anyway.

This is what Donald Trump does not want voters to know about him: His one purported qualification for the presidency — being a successful businessman — is a lie, and he couldn't make it in business even with an enormous amount of help from Daddy.