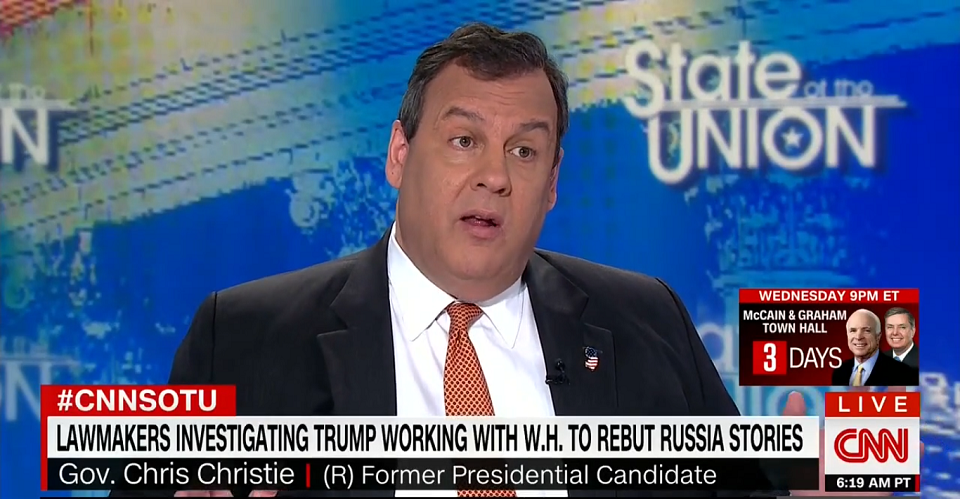 In the wake of the revelation that the Trump White House and the FBI colluded to quash a story about contacts between Donald Trump's campaign and Russia, pressure is mounting for an independent special prosecutor. New Jersey Governor and frequent Trump surrogate Chris Christie (R-NJ) slipped up Sunday morning, and gave away the real reason Republicans are resisting such an investigation.

In addition to the revelation that Donald Trump's administration colluded with the FBI to quash a New York Times story about Trump campaign contacts with Russia, it was revealed this week that Republican lawmakers on intelligence committees also participated in that effort.

With these revelations has come increased pressure for an independent investigation by a special prosecutor, even from the likes of GOP Rep. Darrell Issa (R-CA).

But on CNN's State of the Union, Trump surrogate, New Jersey Governor, and former prosecutor Chris Christie (R-NJ) gave a tellingly honest response to Issa's and others' calls for a special prosecutor:

I just think, Jake — and this is whether you're a Republican or a Democrat, we've seen it happen on both sides — when a special prosecutor gets involved, the thing gets completely out of control. And I think that doesn't serve anybody's purposes. We have a lot of important problems to deal with in this country, and this — I'm not saying that's not one of them, but I believe the Justice Department can handle it.

As any prosecutor worth their salt would surely say, though, the purpose of an investigation is not to "serve anybody's purposes" or to remain in "control" of anyone — it is to discover the truth. Christie's statement handily explains what we already knew about Republican resistance to a special prosecutor, and insistence on Republican-controlled committee investigations: They want to keep the Trump administration's misconduct under Republican control, to serve Republican purposes.

That theme of control was also evident in the Trump administration's only appearance on the Sunday shows, by Deputy White House Press Secretary Sarah Huckabee Sanders. Sanders returned, again and again, to the idea of allowing Republican-controlled congressional committees to handle these investigations, but her remarks demonstrate another way in which the Trump White House is controlling information about these investigations. Note that Sanders offered an extremely abbreviated citation of what the FBI told Chief of Staff Reince Priebus, and George Stephanopoulos' pushback:

ISSA: You cannot have somebody — a friend of mine, Jeff Sessions, who was on the campaign and who is an appointee. You're going to need to use the special prosecutors statute and office to take — not just to recuse, you can't just give it to your deputy. That's another political appointee.

STEPHANOPOULOS: That is a senior Republican Congressman. What's your response?

SANDERS: Look, I think the real easy answer here is that the FBI has already said this story is BS. Those are their words, so I apologize to my mom. But literally, those are the words of the FBI, that the story is BS.

They came to us, they approached us for putting that story out there. I think the American people deserve to know the truth. And that's exactly what it is, that there's nothing here. Just because reporters say something over and over and over again doesn't start to make it true.

STEPHANOPOULOS: A couple of things there. First of all, the FBI has made officially no comment. The FBI director, James Comey, has had no comment. You're saying that the FBI told you that it was BS. The FBI hasn't said that at all.

As Shareblue flagged last week, the only direct citations that Priebus made of the (then-anonymous) comments by the FBI were that the New York Times' story of "constant contacts" between the Trump campaign and Russia was "grossly overstated and it was wrong," and intimated the "BS" quote. By authorizing that "on-background" statement, the FBI has allowed the White House to control the information about this investigation, first by having Priebus embellish it far beyond what was apparently actually said, then by enabling Sanders to cherry-pick it.

The FBI, the Trump administration, and the Republican-controlled congress have all proven themselves unwilling to allow an investigation into the facts. And Christie's admission is yet another reason for the people and the press to demand an independent investigation by a special prosecutor.