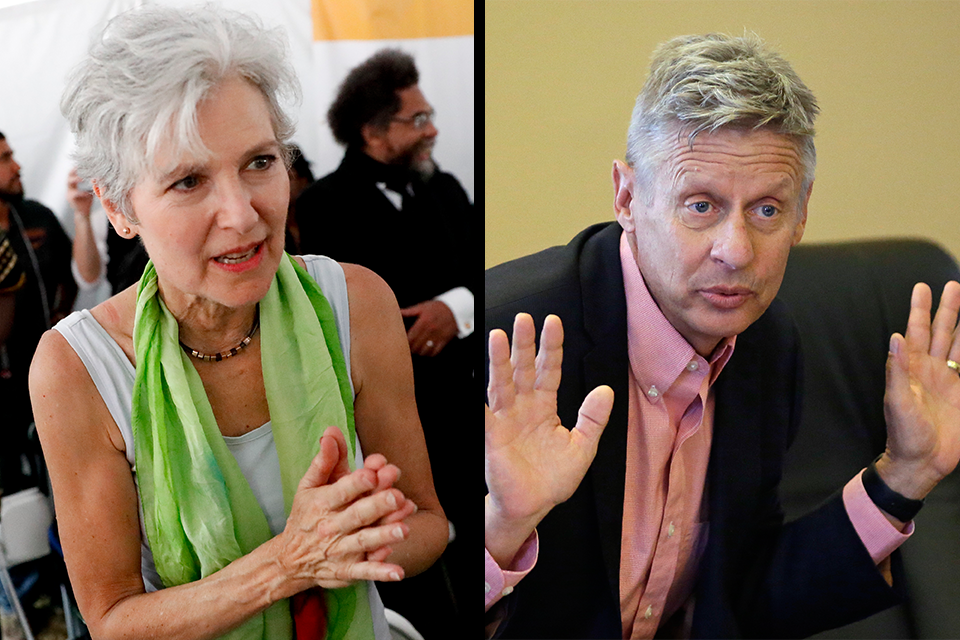 In previous elections, third-party candidates have mounted legitimate bids for high office. In 2016, Gary Johnson and Jill Stein have not. With a Trump presidency a looming possibility, it is time to accept that fact.

As the 2016 election enters its final phase, we need to state the truth as it is: Gary Johnson and Jill Stein have consistently proven throughout the campaign cycle that they are not credible candidates. They have proposed horrendous policy ideas that would harm people across the country.

Libertarian Johnson supports TPP, fracking, Citizens United, and no min wage. How any Sanders supporters could back him is baffling to me.

Gary Johnson has proposed abolishing the income tax, the Department of Education, the EPA, and all restrictions on firearm ownership. His party platform calls for privatizing Social Security and turning Medicare into a block grant. He advocates an immediate 20% cut to federal spending, which would put millions of people out of work. He supports Citizens United. He's so ignorant of foreign policy he had to ask what Aleppo is on live TV. On climate change, he said he'd rather let the world end and "inhabit other planets" than regulate greenhouse emissions.

Apart from a stint as town council representative, Jill Stein has never held political office in her life. Her idea of a campaign event is vandalizing bulldozers in North Dakota. Despite being a medical doctor, she has repeatedly pandered to fears that vaccines cause autism, and has also said wi-fi causes brain damage. She wants to essentially end our defense systems in NATO countries. She claimed she'll eliminate all student debt using "quantitative easing", which is literally gibberish. She has praised Brexit and flirted with the 9/11 Truth movement.

Stein gave a "human rights" speech at the Kremlin in which she basically sided with Russia against U.S. foreign policy. Her running mate is an outright conspiracy theorist who called President Obama an "Uncle Tom" and collaborated on publications with a Holocaust denier. Above all, Stein has shown an incredibly vindictive streak...she once tweeted that Hillary Clinton is a bad mother, on Mother's Day.

The simple fact is, for all the bellyaching about a "rigged system", Johnson and Stein are not viable alternatives. Their ideas are simply too dangerous. Past elections, such as 1992, have proven that third-party candidates are perfectly capable of gaining attention and a base of support. The fact that neither Johnson nor Stein can do so says far more about them than it does about our electoral system.