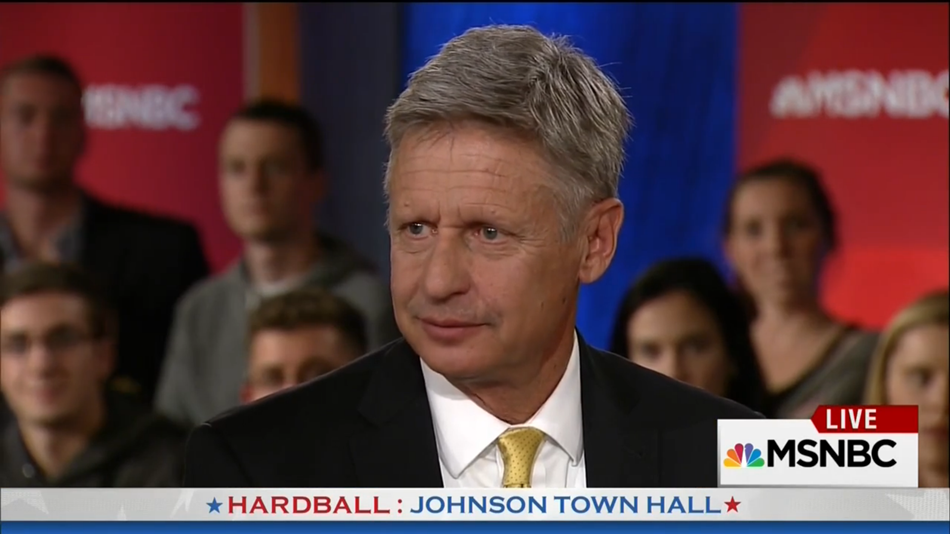 Gary Johnson is not a credible presidential choice. His position on climate change alone should be disqualifying for younger voters, not to mention the rest of his outlandish policies.

Libertarian Johnson supports TPP, fracking, Citizens United, and no min wage. How any Sanders supporters could back him is baffling to me.

Gary Johnson has proposed abolishing the income tax, the Department of Education, the EPA, and all restrictions on firearm ownership. His party platform calls for privatizing Social Security and turning Medicare into a block grant. He advocates an immediate 20% cut to federal spending, which would put millions of people out of work. He supports Citizens United. He’s so ignorant of foreign policy he had to ask what Aleppo is on live TV. On climate change, he said he’d rather let the world end and “inhabit other planets” than regulate greenhouse emissions.

And now here's Johnson on Hardball, freezing up and referencing his infamous ignorance about Aleppo:

OK, you're thinking of voting for Gary Johnson instead of Clinton. Please watch this video first. https://t.co/QMjK0c695y

Here's the video— Gary Johnson says he's having an "Aleppo moment" when he can't name a world leader he respects: https://t.co/7oRLTW5Jep

The stakes are much too high in 2016 to give a vote to an unserious candidate.