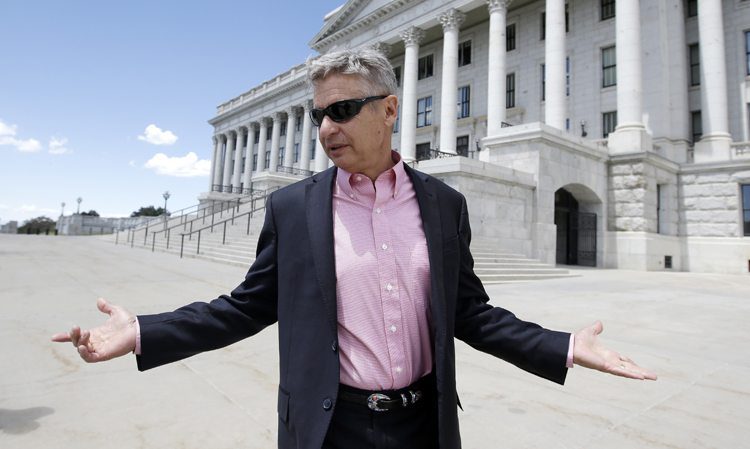 Libertarian candidate Gary Johnson is currently polling at an average of 8.8 percent. He's getting his strongest support from under-30 voters, many of whom are drawn to his message of "social liberalism and fiscal conservatism." But there's no such thing—not if you understand the consequences of the economic policies promoted by Johnson. Simply put: Unless you're already doing fine, Johnson isn't looking out for you.

Economic policy does not exist in a vacuum, but in the real world with real consequences for real people. And while individual choices do make a difference in one's financial security, the range of opportunity to any individual person, in which their choices are made, has an even bigger impact.

A candidate who advocates economic policy that limits opportunities, and/or makes life increasingly more difficult the less money one already has, cannot reasonably claim to be a social liberal.

Gary Johnson is a candidate whose economic proposals would not expand opportunities for people who most need increased access and choice. We're going to look at four of them here: Taxation, the minimum wage, education, and healthcare.

Governor Johnson advocates for the elimination of special interest tax loopholes, to get rid of the double-taxation on small businesses, and ultimately, the replacement of all income and payroll taxes with a single consumption tax that determines your tax burden by how much you spend, not how much you earn. Such a tax would be structured to ensure that no one’s tax burden for the purchase of basic family necessities would be increased. To the contrary, costs of necessities would likely decrease with the elimination of taxes already included in the price of virtually everything we buy.

There are significant problems with this plan, especially when one delves into the details he hasn't seen fit to provide. At TheStreet, Emily Stewart lays out the facts:

As president, Johnson would eliminate income tax and corporate tax and abolish the IRS, replacing all of it with one federal consumption tax. He advocates the FairTax, a proposal currently in front of Congress that enacts a flat 23% tax on new goods and services for personal consumption.

Such a tax would be regressive, meaning lower-income and even middle-income Americans would wind up spending a much larger share of their incomes than those in the upper echelons of the economy. The scheme includes a "prebate," which would ensure each household can consume tax-free up to the poverty level, to combat its regressive nature.

The problem, of course, is that someone just this side of the poverty level can't magically absorb a 23 percent flat tax significantly better than someone in poverty. And someone who spends 75 percent of a low income on purchasing is paying a significantly higher share of taxes than someone who spends 1 percent (or even less) of a high income on purchasing.

To state the (ought to be) obvious: Obliging people with low incomes to pay a higher proportion of taxes does not expand their economic opportunities. On the contrary, it limits them. There is nothing socially liberal about entrenching people in poverty.

And there's nothing socially liberal about penalizing young people who are just embarking on their careers. Even a young person privileged enough to have had the opportunity to secure the educational opportunities to qualify them for their preferred career still faces the lower income of a starting salary. It will be much more difficult to get ahead—and to thrive—paying a hefty consumption tax on an entry-level wage.

Johnson does not support a federal minimum wage. In fact, he has advocated for a repeal of the minimum wage. His big solution is to let the market decide—even though the entire reason we need a federally mandated minimum wage is because "the market," driven by executives beholden to shareholders, seeks to drive down wages and exploit workers to maximize profits.

The requirement to provide people with a livable wage is a necessary market regulation. But Johnson feels it's unnecessary, because he believes people will simply choose to go somewhere else or switch fields if they aren't making enough money: "Now you’re back to fast food, and people make choices. Uh, you be what you can be, what you wanna be. And I still believe that."

Except: There aren't enough jobs to sustain everyone who wants to "make the choice" to be employed in a position with a livable wage. In which case, Johnson's recommendation is: "Apply what you know entrepreneurially. Make your own job. Make a job that you’re gonna end up hiring other people."

Which is a great idea, aside from the fact that systemic oppressions mean that some people, by virtue of their identities, are far less likely to get business loans than others. And the fact that not everyone wants to run a business, or has the acumen—or experience—to do it. Some people simply want to be employees. And those people should be able to make a living wage, too.

Johnson has picked up a number of supporters from erstwhile candidate Bernie Sanders—many of whose number one issue is the cost of higher education. Unfortunately, Johnson is hardly the best candidate for anyone looking for someone to address their concerns.

Johnson was very blunt in his assessment during a phone interview with ProCon.org:

So what does that mean for people who need to pay for higher education? Well, Johnson is going to leave that to you to figure out. Hopefully the market will have decided to pay you a livable wage and you still have enough left over after your 23 percent consumption tax to pay for classes.

If your primary concern is the quality primary and secondary public school education, Johnson's positions probably won't thrill you, either. On his website, Johnson advocates eliminating the federal Department of Education, criticizing Common Core standards and arguing "that state and local governments should have more control over education policy."

That might sound terrific if you live in a wealthier area where high property taxes are funding a quality education and the school board believes in teaching things like science and comprehensive sex ed.

If, however, you live in a lower income area where the school district isn't robustly funded, and/or an area where conservative governance would dictate teaching things like evolution and abstinence-only sex ed, it might not sound so great.

Just like Johnson imagines someone who isn't getting paid a livable wage can easily find another job or switch to another career or start their own business, he imagines people unhappy with local public schools can easily pick up and move somewhere else. Or send their kids to a private school. Or hope someone starts a charter school that meets their needs.

His education policy, like all of his other policies, is based on a deeply unrealistic view of the world, presupposing an equality that affords everyone comparable opportunities and flexibility.

Johnson is an opponent of the Affordable Care Act—and any version of single-payer government sponsored healthcare. When the Supreme Court ruled to uphold the ACA, Johnson issued a statement that read, in part:

Government cannot create a system that will reduce costs while increasing access. Only competition and the price transparency that competition will bring can accomplish the imperatives of affordability and availability. Whether it is the President’s plan or the Republican prescription drug benefit, the idea that anyone in Washington can somehow manage one of the most essential and substantial parts of both our quality of life and the economy is, and always has been, fundamentally wrong.

Anyone who has a run-in with an insurance company refusing to pay for care may rightly wonder whether Johnson believes private, for-profit insurance companies are somehow capable of managing "one of the most essential and substantial parts" of our lives, and the answer is yes.

Though he doesn't even bother to include healthcare as an issue on his campaign site, he has previously stated that he believes a "market-based approach should be the foundation of any solution. A health care insurance system that is privately owned and managed is the best approach to solving our health care problems."

By way of reminder, the ACA has helped nearly 12 million people get insurance who couldn't get insurance from the "privately owned and managed" insurance marketplace.

* * *
Insofar as Libertarianism works at all, it works for people who are already economically and socially secure. For people who are not economically and socially secure—which includes a vast number of marginalized people, as well as young people—Johnson's policies are not going to be helpful. In fact, they will actively work against building a stable and secure life.

If you're looking for a candidate who is going to help you build a future, Johnson isn't your guy.

Unless you like the idea of handing your vote to someone whose idea of a social contract is "every man for himself."