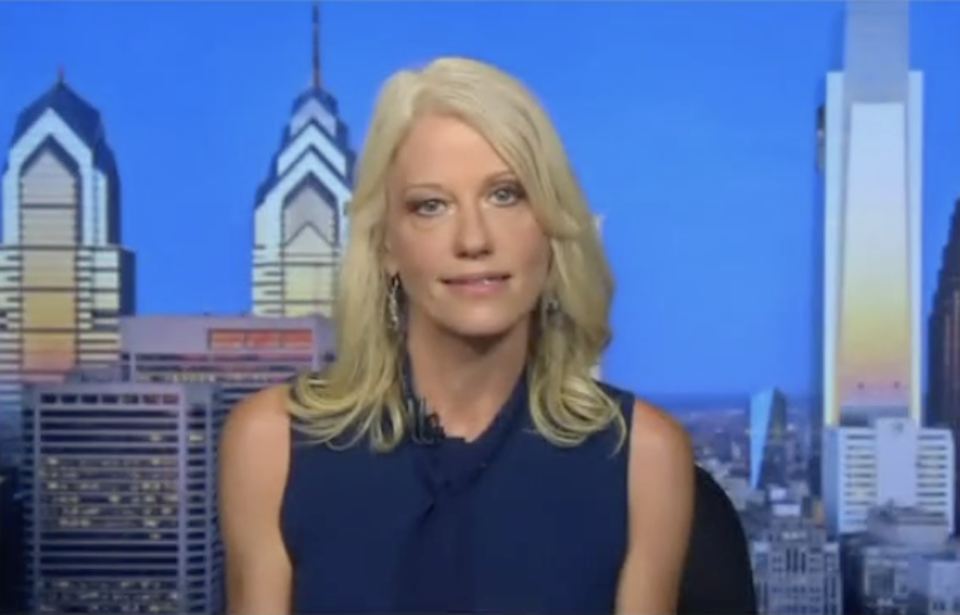 Trump adviser Kellyanne Conway can't explain away fact that Trump's son, son-in-law, and campaign manager met with a Kremlin-connected attorney during campaign after she promised dirt on Hillary Clinton.

During an appearance on "Good Morning America," Conway attempted to justify a meeting during the 2016 campaign that Donald Trump Jr., Paul Manafort, and Jared Kushner held with a Kremlin-connected Russian attorney who promised damaging information on Hillary Clinton.

Host George Stephanopoulos repeatedly pressed Conway as to why Trump’s team continually misled the public about previous contacts with Russian operatives. In fact, Conway was confronted with a television denial she gave back in December when asked about possible contacts between Trump and the Russians.

"Absolutely not," she said at the time, "and I discussed that with the president-elect just last night. Those conversations never happened.”

Conway tried to brush aside the White House’s previous misinformation by insisting disclosure forms had been updated to reflect any meetings with Russians. She also alternately blamed President Barack Obama for the Russia story and claimed everyone had damaging information about Clinton, so therefore it wasn’t newsworthy that Trump advisers sought it out from a Kremlin-connected attorney.

Asked by Stephanopoulos if Trump Jr.’s meeting with the Russian attorney  didn’t indicate a desire a collude with a foreign adversary during an America election, Conway insisted the meeting produced “no evidence of collusion.” She added, “Everyone is trying to convert wishful thinking into hard evidence.”

“The information was sought from the campaign and those denials were allowed to stand for many months," he said. "That’s the bottom line.”

STEPHANOPOULOS: We know from Don Jr.'s own admission that he sought the meeting with the Russian because she would provide damaging information with Hillary Clinton. How can you say that is not at least an attempt at working with the Russians to hurt the Clinton campaign to help the Trump campaign?

CONWAY: Two quick things. He did not seek the meeting. If you look at his statement, he said the meeting was requested of him and he agreed to the meeting. That's different than—

STEPHANOPOULOS: Because she was going to give damaging information about Hillary Clinton.

CONWAY: He didn't even know her name, George. He had no idea who this person was until she entered the room. He said that also in his statement.

STEPHANOPOULOS: But he believed that she was bringing damaging information about Hillary Clinton. That's why he agreed to the meeting by his own admission.

CONWAY: She didn't have it. Look, the only information, the only people who had information about Russia meddling in, say, 20 — summer of 2016 did not work in the Trump campaign. They worked in the Obama White House. They were briefed, according to the Washington Post about this kind of information, and did absolutely nothing because they never thought Donald Trump would win. Number two, no meaningful information was received, no action was taken. When I became campaign manager, nobody said, Oh, we have to turn over this file to you of this fabulous — there's nothing like that. We were talking to people in Michigan, not Moscow, and I think it's important for people to know that.

STEPHANOPOULOS: Kellyanne, we have to go. The information was sought from the campaign and those denials were allowed to stand for many months. That's the bottom line. Thanks very much for your time.

Trump Jr. previously denied having ever met with any Russian agents. Then, days ago, he claimed the meeting was actually to discuss adoption policy between the U.S. and Russia. Now he concedes the meeting was about the Clinton campaign, but that the Russian attorney failed to deliver any good dirt.

The Trump Jr. revelation came just one day after Trump returned from the G20 summit in Europe where he stunned observers by delivering to concessions to Russian president Vladimir Putin.