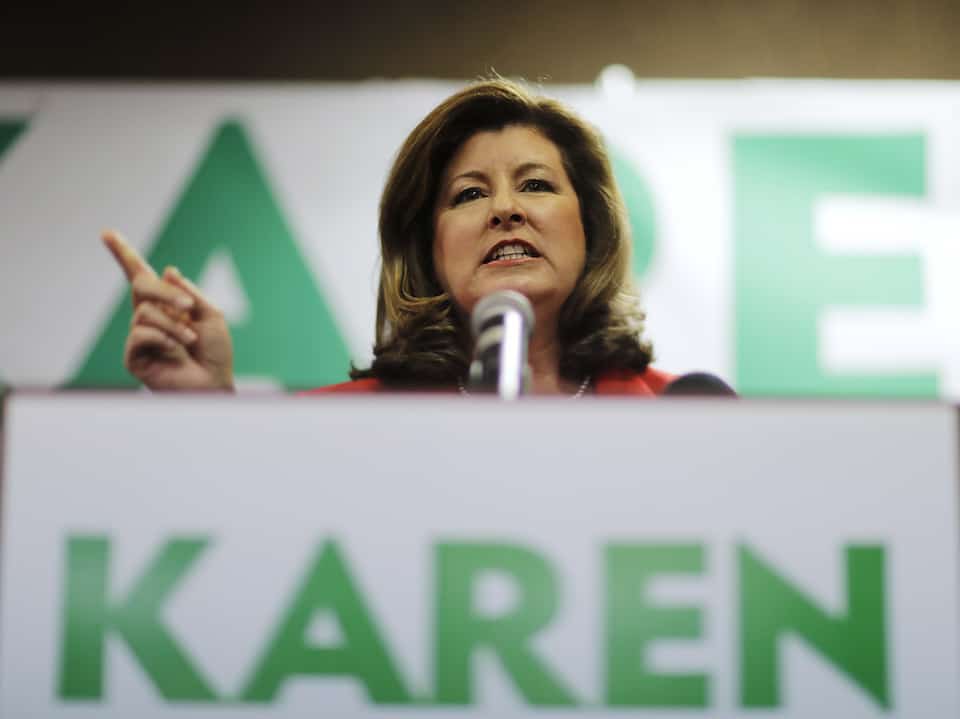 The Georgia Republican enthusiastically supported by Donald Trump is only aware of a lack of civility from "the left."

Georgia Republican Karen Handel, who faces off against Democrat Jon Ossoff in Tuesday's special election, has decried the lack of civility in American political discourse.

But she's not pointing a finger at her own party, who spent eight years hinting or outright declaring that President Barack Obama was illegitimate because he was a secret Kenyan. Nor is she pointing the finger at Donald Trump, whose vociferous and petulant insults attacks against his critics are unprecedented and certainly unpresidential.

No, Handel's blaming "the left." And the media.

"There is a lack of civility in society as a whole," she said in an interview with The Guardian's Ben Jacobs, who was recently assaulted by Republican Greg Gianforte the night before he won the special election in Montana. "Social media has been fueling it, journalism has been fueling it,” Handel added.

Asked whether the lack of civility was a partisan issue, Handel said:

I can only tell you what I have observed in this race. The anger has been from the left with groups of trackers showing up and literally adopting a gang-like posture and virtually stalking individuals.

It's an odd observation, to say the least, especially to a reporter who was "body-slammed" by a Republican candidate only weeks ago, simply for asking about the House GOP's health care repeal plan.

And it does not take more than a second of searching on the internet to find plenty of examples of uncivil discourse from the right — including from the Republican president himself, who has endorsed and fundraised for Handel and repeatedly tweeted insults about Ossoff, and Democrats as a whole, in his support for Handel.

Meanwhile, the campaign against Ossoff certainly has been anything but civil. Republican groups have run ads suggesting Ossoff is tied to Osama bin Laden and ISIS. One ad by the NRA falsely described Ossoff as an outsider from Washington, D.C. Ossoff was in fact born and raised in Georgia 6th Congressional District.

If Handel wants to criticize the lack of civility in politics, she would do well to start with a long hard look at her own party — and especially the president who has been such a strong supporter of her campaign.