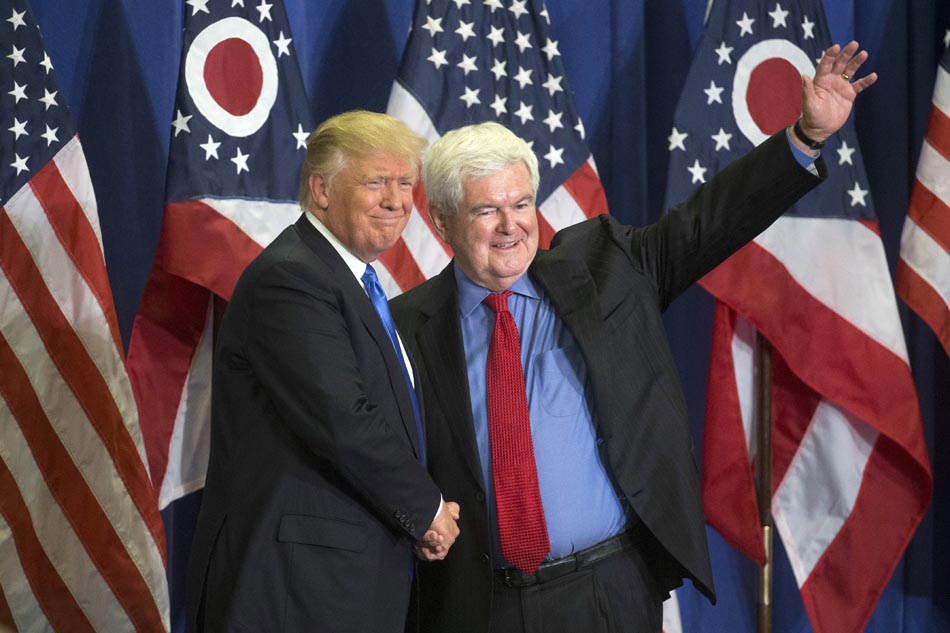 Former Speaker of the House and current Fox News contributor Newt Gingrich argued that Congress should "change the ethics laws" to accommodate President-elect Donald Trump and his vast business entanglements, even as two new major ethical concerns associated with Trump's family business are being reported.

Fox News contributor Newt Gingrich is advocating for Congress to “change the ethics laws” for President-elect Donald Trump, rather than forcing Trump to “disentangle himself from his multibillion-dollar business to avoid conflicts of interest with his incoming administration.”

…Gingrich, a staunch Trump supporter, is calling for “a whole new approach” for Congress to address Trump’s potential conflicts of interest: “Change the ethics laws.” Gingrich also suggested that Trump could use “the power of the pardon” to get around ethics laws by saying “Look, I want them to be my advisers. I pardon them if anyone finds them to have behaved against the rules. Period.”

Gingrich's argument is explicitly to rewrite the rules because Trump is wealthy, saying during an interview on NPR: "We’ve never seen this kind of wealth in the White House, and so traditional rules don’t work. We’re going to have to think up a whole new approach.”

It is not, of course, Trump's "wealth" that is at issue, but how he accumulates it.

Gingrich's call to reinvent ethics rules for Trump comes even as there are two more reports of major ethical concerns around Trump's family business.

At Think Progress, Judd Legum and Kira Lerner report that the Embassy of Kuwait "allegedly cancelled a contract with a Washington, D.C. hotel days after the presidential election, citing political pressure to hold its National Day celebration at the Trump International Hotel instead."

A source tells ThinkProgress that the Kuwaiti embassy, which has regularly held the event at the Four Seasons in Georgetown, abruptly canceled its reservation after members of the Trump Organization pressured the ambassador to hold the event at the hotel owned by the president-elect. The source, who has direct knowledge of the arrangements between the hotels and the embassy, spoke to ThinkProgress on the condition of anonymity because the individual was not authorized to speak publicly. ThinkProgress was also able to review documentary evidence confirming the source’s account.

In the early fall, the Kuwaiti Embassy signed a contract with the Four Seasons. But after the election, members of the Trump Organization contacted the Ambassador of Kuwait, Salem Al-Sabah, and encouraged him to move his event to Trump’s D.C. hotel, the source said.

Kuwait has now signed a contract with the Trump International Hotel, the source said, adding that a representative with the embassy described the decision as political.

Prospective million-dollar donors to the “Opening Day 2017” event — slated for Jan. 21, the day after inauguration, at Washington, D.C.’s Walter E. Washington Convention Center — receive a “private reception and photo opportunity for 16 guests with President Donald J. Trump,” a “multi-day hunting and/or fishing excursion for 4 guests with Donald Trump, Jr. and/or Eric Trump, and team,” as well as tickets to other events and “autographed guitars by an Opening Day 2017 performer.”

…“This is problematic on so many levels,” said Larry Noble, the general counsel of the Campaign Legal Center, a nonpartisan campaign reform organization. “This is Donald Trump and the Trump family using a brand new organization to raise $1 million contributions for a vague goal of giving money to conservation charities, which seems a way of basically just selling influence and selling the ability to meet with the president.”

We have a president-elect who already believes the rules do not apply to him, his family, or his business. The way to address that is not to agree and rewrite the rules to accommodate him.

The way to address that is to continue to apply pressure on Trump to fully divest himself of his business holdings, so that he does not "arrive in office as a walking, talking violation of the Emoluments Clause of the Constitution," as described by Norman Eisen, Richard Painter, and Laurence H. Tribe in their detailed brief about Trump and his impending Constitutional violations. And, should he refuse, to hold him firmly to the established ethics rules to which every other president has been held.

Fundamental principles of our democracy are at stake. It may be difficult to thoroughly resist normalization of the aggressively abnormal, but that just makes unyielding resistance all the more important.