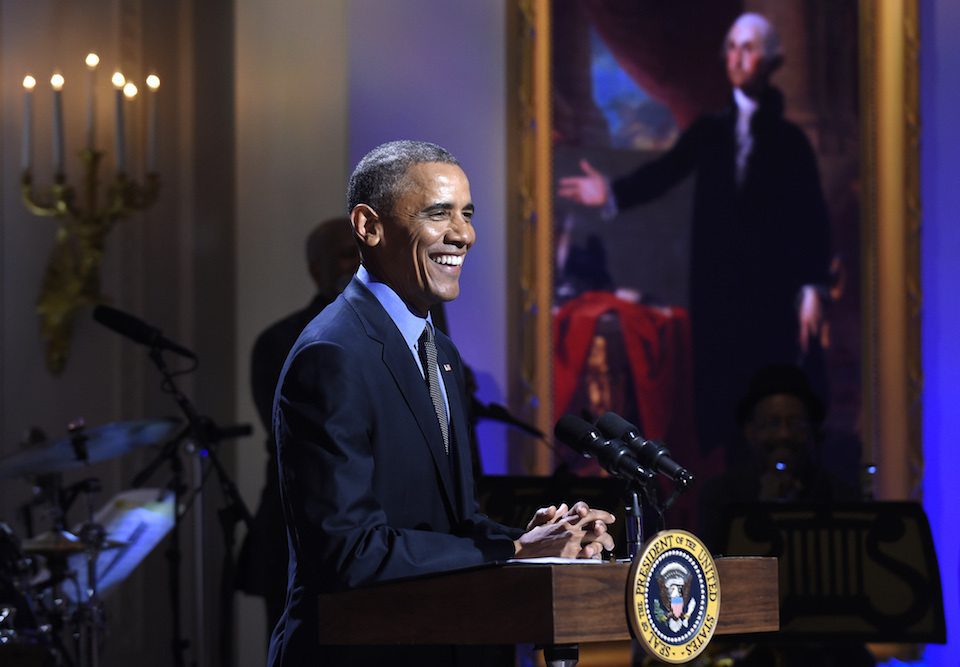 Welcome to your daily roundup of good news about good people, how you can help make a difference — and a picture of President Obama to brighten your day.

The Handmaids are back in town!

Earlier this year, women donned the now-iconic red and white costumes from Margaret Atwood's speculative yet all too real novel "The Handmaid's Tale," and took to the streets and the statehouses to protest attacks on reproductive freedom.

The attacks haven't stopped — and neither have the Handmaids. In one powerful example from a nationwide movement, the Handmaid Coalition joined up with Indivisible Illinois at the Federal Plaza in Chicago Saturday in a day of action against the Trump administration's and the GOP's antagonism toward abortion rights.

As Deb Wellek Wolkstein, spokesperson for the Handmaids, stated powerfully, "While the silence of the Handmaids here today is symbolic, the systematic silencing of women and the state sponsored control of women’s bodies is all too real. "

This movement is 50 states and millions of people strong:

More and more women are running for office

We already knew that one silver lining to the dark Trump cloud was that his election impelled thousands of women to run for office themselves. And the numbers just keep growing.

Since January, nearly 19,000 women have reached out to EMILY's List to get information about and assistance with running for political office.

The organization has since expanded its staff by 20 percent to meet the needs of women ready to take on Trump and the GOP. And this is a notable change of pace.

"For literally 32 years, we’ve mostly had to go out and recruit candidates," said Stephanie Schriock, the organization's president."So when we saw saw all these women signing up, we felt that we had to respond."

As pioneering black Congresswoman Shirley Chisholm declared, "If they don't give you a seat at the table, bring a folding chair."

California Democratic Gov. Jerry Brown just signed a landmark bill on the subject of gender identity. Californians who identify as non-binary — neither fully male or female, with individual degrees of gender fluidity — can now have their identity accurately represented on birth certificates, driver's licenses, and other legal documents.

The bill's co-author, Democratic state Sen. Toni Atkins, thanked Brown "for recognizing how difficult it can be for our transgender, nonbinary, and intersex family members, friends, and neighbors" when their documents don't match their appearance.

Gov signed our SB179: allows ppl to identify as non-binary, easily correct gender. Big win 4 notion ppl should be allowed to be who they are

ACTION ALERT: Speak out to save Obamacare!

The Trump administration is doing everything they can to sabotage Obamacare. So it's time for all of us to do everything we can to defend President Barack Obama's landmark achievement, and to protect access to quality, affordable health care for all.

And Organizing for Action can help you do it: go here to get connected to a key senator's office and tell them what Obamacare has meant to you and your loved ones, and why they must fight to save and improve it.

New Hampshire Democratic Sens. Jeanne Shaheen and Maggie Hassan led 23 of their Democratic colleagues in the Senate in filing an amicus brief in support of Planned Parenthood and reproductive freedom in Texas.

In 2016, Texas kicked Planned Parenthood health centers out of the state's Medicaid program, severely limiting the organization's ability to provide much-needed medical care to low income patients. A federal judge issued a preliminary injunction in February 2017, but — of course — Texas appealed, and now the case is heading to the 5th Circuit Court.

In their brief, the senators called Texas out for imposing ideology on constituents.

Texas terminated the Medicaid provider agreements of three Planned Parenthood organizations for reasons unrelated to its medical or professional qualifications. Texas thereby threatened to withhold from low-income patients one of their highest quality family planning options (and sometimes their only such option). Its action contravenes Congress's intent to increase the availability of quality family planning options and provide patients with meaningful choices. [...]

Were Texas permitted to terminate the three Planned Parenthood organizations' Medicaid provider agreements for purely ideological reasons unrelated to their ability to provide medical care as "qualified" providers, thousands of low-income women and families in Texas might be barred from their provider of choice, and many may have no family planning options at all. That is not the result Congress intended, and this court must not countenance it.

ACTION ALERT: The resistance needs you, now and every day ahead.

There is a LOT going on these days, and much of it is frightening and overwhelming. But each of us has the power to fight back, in whatever ways we are able.

From marches to meetings, town halls to conference calls, you can do your part to defend the nation. Visit ResistanceNearMe.org to find all the ways you can stand up and fight back.