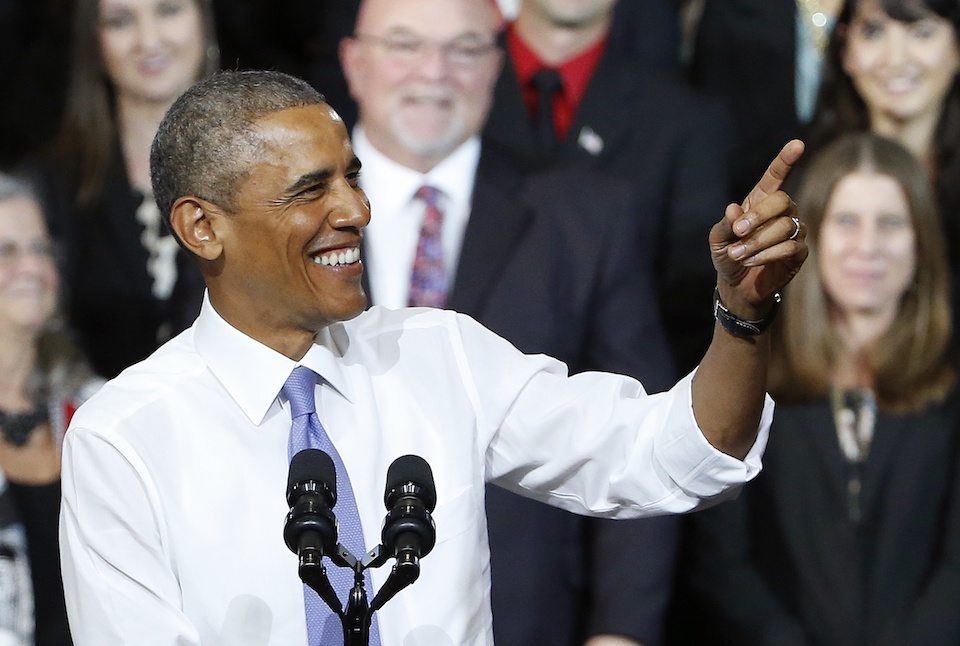 Welcome to your daily roundup of good news about good people, how you can help make a difference — and a picture of President Obama to get you motivated.

Organizing for Action is taking on the fight for redistricting

President Barack Obama has made pushing back against GOP-orchestrated gerrymandering a key cause of his post-presidency life. And now the progressive group that grew out of his campaign structure is joining the effort.

Organizing for Action officially teamed up with the National Democratic Redistricting Committee, led by former Obama administration attorney general Eric Holder, to prepare for the upcoming midterms and beyond, and to put an end to Republican efforts to make districts as red as possible.

Obama announced the partnership in an email to OFA's supporters, noting that "redistricting has the potential to be a major turning point for our democracy."

Systemic gerrymandering has favored one side over the other in literally hundreds of congressional and state legislative districts around the country.

If we're ever going to truly achieve our vision of an America that works for everyone, we have to draw our districts so that politicians are encouraged to cater to common sense, not rigid extremes.

Getting that done will require participation. It will require each of us continuing to accept our responsibility to be active, engaged citizens.

You heard the man.

The 2018 midterms are just over a year away, but Democratic candidates are already making crucial strides toward victory. As Politico reports, the huge fundraising hauls pulled in by over 160 Democrats in red districts are "alarming GOP strategists" and laying the groundwork for "the most expansive House battlefield in years."

Animated by opposition to President Donald Trump and the Republican congressional majorities, at least 162 Democratic candidates in 82 GOP-held districts have raised over $100,000 so far this year, according to a POLITICO analysis of the latest FEC data. That’s about four times as many candidates as House Democrats had at this point before the 2016 or 2014 elections, and it’s more than twice as many as Republicans had running at this point eight years ago, on the eve of capturing the House in the 2010 wave election.

Nearly three dozen Republican incumbents were outraised by Democratic challengers in the third quarter of this year – a stunning figure. Nine GOP incumbents already trail a Democratic opponent in cash on hand, increasing the likelihood that many veteran incumbents will face tough opposition for the first time in years.

From New Jersey to Texas to Washington state, once-solid Republican districts are looking more and more up for grabs next year — especially if Republican incumbents align themselves with their very unpopular president.

Washington Democratic Sen. Patty Murray teamed up with Tennessee Republican Sen. Lamar Alexander to introduce a bill that would counteract Trump's reckless move to end cost-sharing payments to insurers. This is a crucial effort to defend Obamacare from Republican sabotage and protect access to affordable, quality health care for everyone.

So it's time to get on the phone to your senators and urge them to support this bill. Not sure what to say? 5calls.org has got you covered with the background and the script.

Doug Jones is running for Jeff Sessions vacated Senate seat in Alabama. It's a daunting task for a Democrat in the deep-red state, but Jones has had far tougher fights in his past — fights he won.

As a U.S. attorney in 2002, Jones was the lead prosecutor in a case against two Klansmen responsible for the 1963 church bombing in Birmingham, Alabama, which killed four young girls. Jones brought the murderers to justice, and that success informs his work today, as he is keenly aware that racial hatred is still all too present.

Democratic Sens. Chris Murphy and Richard Blumenthal of Connecticut and Dick Durbin of Illinois will introduce the Background Check Expansion Act as part of a larger effort to advance sensible gun safety measures and to protect Americans from gun violence.

The bill will expand the current requirements to include all sales or transfers of guns by private sellers, who are currently not required by federal law to do so.

Background checks are a crucial tool to prevent tragic deaths by keeping weapons out of the hands of dangerous people. They are perfectly compatible with the protections of the 2nd Amendment, and they are supported by an overwhelming majority of gun owners.

Temporary Protected Status, or TPS, is a provision which grants protection from deportation to immigrants from countries afflicted by natural disasters, war, famine, and other devastating situations.

The Trump administration is heartlessly taking aim at this important humanitarian program. But TPS holders and their allies will not let this dangerous move go unchallenged. They are holding a week of action to call attention to the matter.

Tuesday, there will be a press conference in front of the White House at 11:15 am, followed by an interfaith vigil and the launching of a hunger strike beginning at noon, to call attention to the need for Congress to create a pathway to permanent status for over 300,000 immigrants at risk of being deported back to their dangerous home countries.

A leaked White House document contained an alarming new tactic from the Trump administration to chip away — with a jackhammer — at reproductive rights.

Obtained by Crooked Media, the memo shows an intent "to halve federal funding for Title X, the grant program that provides family planning and prevention services to the poor, and divert the money into programs to promote "fertility awareness" methods of birth control."

And yes, as Planned Parenthood Action Fund president Cecile Richards explained to MSNBC's Ari Melber, that is exactly as ludicrous and dangerous as it sounds. What "fertility awareness" really means is something called the "rhythm method."

And do you know what they call people who use the "rhythm method" as their only attempt at contraception?

"What it really results in is millions of unintended pregnancies," Richards said — which is, ostensibly, something anti-choice politicians are also against.

"It's all part and parcel, I think, of an administration that have put people who are putting their own politics ahead of the health and well-being of women," Richards concluded. "And that's what's really scary."