Home National Good news for people who want to do good: Day 285
Progressive journalism is under attack. Please help us fight back!
DONATE 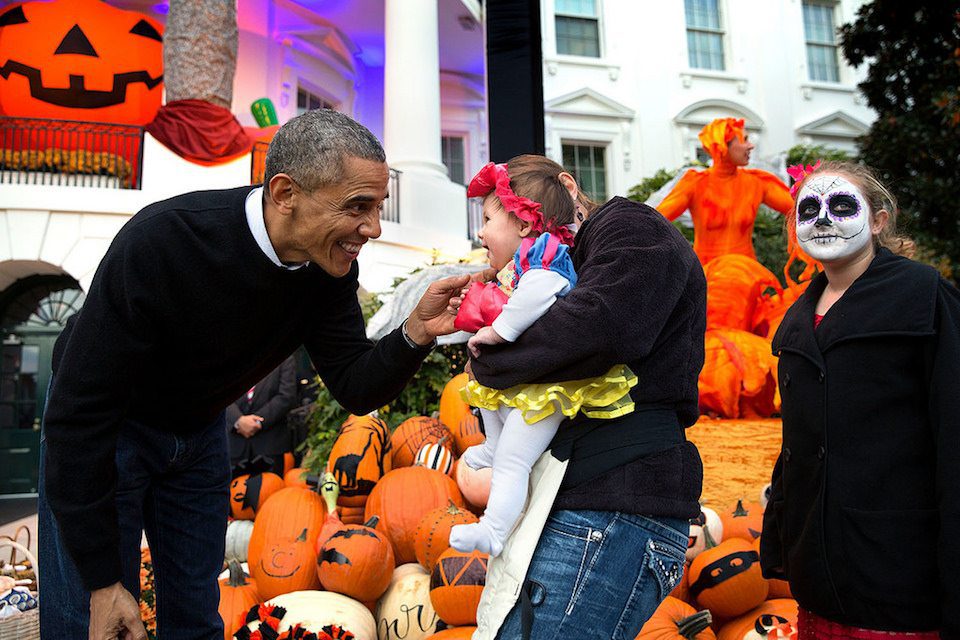 Welcome to your daily roundup of good news about good people, how you can help make a difference — and a picture of President Obama to keep your spirits up.

November 1 is not just a day to buy up all the half-priced candy — it's also the day to get your health care in order. The Obamacare open enrollment period starts tomorrow, and runs through Dec. 15. If you don't have health insurance through your employer, a family member, or a program like Medicare or Medicaid, now is the time to sign up to avoid possibly paying a penalty next year.

Go here to preview 2018 plans and prices and find out what your options are. And if you feel overwhelmed or unsure, never fear — Indivisible, as always, is here to help. Visit covered.indivisible.org to get information on open enrollment, how to navigate the marketplaces, and if you already have coverage, how you can help get the word out and sign others up.

Activists give Ed Gillespie a piece of their minds

The governor's race in Virginia is entering its final week, and activists are keeping Republican nominee Ed Gillespie on the hot seat. Gillespie's campaign has been nothing short of disturbing, going all in on racism and overt appeals to white nationalists.

The folks at CASA in Action, an immigrant advocacy organization, know just who Gillespie is, and they've been doing the work to make sure others do, too.

"When you criminalize my whole community, this is what happens: the community comes and speaks back against the racist politicking of Ed Gillespie."

And the Latino Victory Fund has a new ad that drives it home: Gillespie's Virginia would be nothing short of a real-life nightmare for anyone who doesn't look, well, just like him.

Ed Gillespie and Donald Trump promise the American dream, but can only deliver an American nightmare. No more. Vote @RalphNortham. #GameOnVA pic.twitter.com/mwpWXM47HZ

Remember, Virginians: November 7 is the day to get to the polls and give Ed Gillespie's toxic politics a resounding defeat.

Rep. Maxine Waters has a powerful message to the nation: "The women in this country are reclaiming our time!"

In the wake of Harvey Weinstein, the #MeToo campaigns, and of course, the election of Trump, it seems the nation as a whole is finally waking up to the reality that victims of sexual abuse and harassment have known all too well for far too long.

And at the Women's Convention in Detroit, Auntie Maxine had a little something to say about it.

"Let the word go forward this day that the women at this convention and all across the country have had enough. Enough is enough! We're not going to take it anymore!"

And to the perpetrators of these heinous acts, she offered some crystal clear instruction. "Keep your hands off our backs and our God damned bodies!"

From Alabama to California, Indivisible groups are making themselves seen and heard

The states of Alabama and California may not have a long list of similarities, but these days, you can find common ground in the resistance in every corner of the country. In San Diego, Indivisible members let their "Impeach!" flag fly:

Let’s get it on a #Resistance Road Trip!

While 2,000 miles away in Alabama, Indivisible folks were knocking on doors to tell their neighbors about Democratic Senate candidate Doug Jones:

Trump and the GOP are still desperately barreling ahead with their terrible tax scam, which would only benefit themselves and their wealthy friends and donors.

If you're pretty sure Ivanka doesn't need a tax cut, then it's time to make your voice heard.

Visit trumptaxscam.org to learn about what the GOP is really trying to do, what it would mean for you and your family, and to get help contacting your members of Congress to demand that they put the lives and livelihoods of everyday Americans ahead of the already-stuffed wallets of billionaires and their kids.

Democratic Rep. Steve Cohen wants to rein in Trump's pardon power — and not a moment too soon

We already knew Trump was willing to use his pardon power in repugnant ways, like for Joe Arpaio, the exceedingly racist and outright criminal former sheriff of Maricopa County, Arizona.

And a lot of people have wondered if Trump would wave the pardon wand for anyone implicated in the Russia investigations.

Now that indictments and guilty pleas are starting to come down the pike, one Democratic congressman is ready to pre-emptively rein Trump in.

Rep. Steve Cohen of Tennessee plans to propose a Constitutional amendment to prevent presidents from pardoning themselves or members of their families, as well as anyone who worked on their campaign or in their administration.

Monday's news "accelerates the need to pass a Constitutional amendment limiting a president’s pardoning authority," Cohen said in a statement, because it is now "clear that some of Manafort’s activities took place while he was working on the Trump campaign."