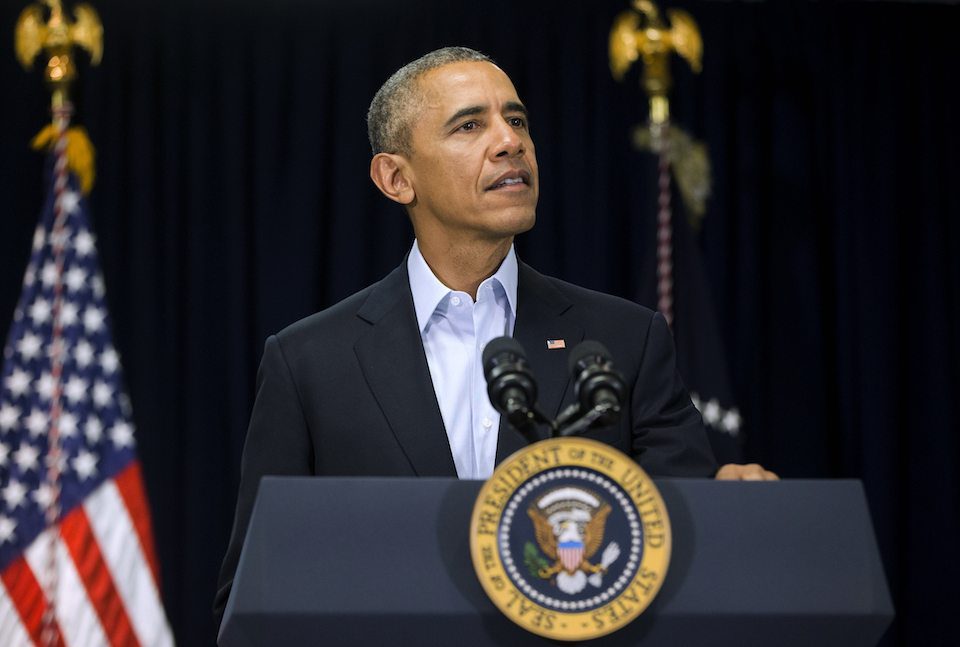 Welcome to your daily roundup of good news about good people, how you can help make a difference — and a picture of President Obama, to remind you what those good people look like.

Today is Monday, which means tomorrow is Tuesday — but in Virginia, it's not just any Tuesday. It's Election Day, and it's the day to get out the vote and make that map blue!

Need a little motivation? How about folks up in Maryland having a "text out the vote" party:

When we're not down in VA canvassing to flip it blue, we're in MD TEXTING out the vote! #FlipVAblue #GOTV @flippable_org @indivisibleteam pic.twitter.com/nH4PC7xZXJ

Or this busload of New Yorkers hitting the road to knock on some doors:

Heading out for day 2 of knocking doors to help #FlipVABlue!

Or these young Democrats phone-banking for Democratic gubernatorial candidate Ralph Northam — all the way down in Puerto Rico!

And hey, after all the joy he's given us, you don't want to let Pete Souza down, do you?

I will be in NYC for my book release next Tuesday. Because I live in VA., I voted via absentee ballot. Virginians: Don’t forget to vote!

The numbers don't lie: Democrats in Virginia have the market cornered on enthusiasm:

NEW: in the first TWO DAYS of GOTV, @vademocrats had 12,515 volunteers knock on 580,537 doors in the commonwealth. Astounding. #GameOnVA

And there are a lot of great candidates to support, as 2018 candidate for Virginia's First Congressional District Vangie Williams has been noting on her Twitter feed.

Time to get it done, Virginia!

The harrowing story of 10-year-old Rosa Maria should never have happened in the first place. But there's good news to report: the young undocumented immigrant with cerebral palsy who was cruelly taken into custody by Border Patrol agents — who waited outside her hospital room while she was having emergency surgery — has been released and is back with her family.

The ACLU had filed a lawsuit on Rosa Maria's behalf, and apparently some portions of the federal government are still capable of feeling shame. But the ACLU will be there anytime they try such heartless moves.

"Rosa Maria should not have been detained for even a second," said Andre Segura, the legal director of ACLU of Texas. "She was ripped from her family without authority by the federal government. We will continue to challenge the government to stop this kind of heartless and unlawful conduct."

You know the tax scam being pushed by Trump and the Republicans is, in a word, garbage. This week is the time to do something about it.

Join Indivisible in the National Week of Action starting Nov. 6 to get the word out about the damage the tax scam would do to basically anyone and everyone who isn't a millionaire or billionaire:

Introducing the newest Indivisible twist on a district office visit—the Trump Tax Scam Payout. Groups across the country have become pros at stopping by (or protesting outside) your [member of Congress'] office. This time, you’ll be bringing them something. A giant check made out to the 1 percent, from working families.

You can also call up your elected official — Democrat or Republican — and demand that they put the needs and interests of everyday Americans ahead of the wealthiest few in the nation.

Remember Republican Rep. Tim Murphy? Sure you do — he's that ultra-conservative, super anti-abortion congressman who was caught not just having an affair, but begging his mistress to get an abortion in order to keep hiding said affair.

Murphy's anti-choice politics included co-sponsoring bills to extend 14 Amendment protections to embryos. Apparently, embryos inside your mistress don't deserve the same life and liberty that any others do, in Murphy's world.

Murphy resigned in disgrace immediately after his text messages pressuring his mistress were made public. But one pro-choice advocacy organization wasn't going to let him get away so easily.

Reproaction put up three billboards in Pittsburgh near Murphy's former office with a pointed message: "Abortion: Not just for your mistress!"

"Drivers in the South Hills are seeing some billboards that may get your attention.” https://t.co/jv5Mvojnfu

As Reproaction cofounder Erin Matson told KDKA, the billboards are also aimed at anyone seeking to replace Murphy.

"We’re going to continue holding the pro-life movement accountable for its moral bankruptcy," Matson said. "Abortion is a common medical procedure used by one in four women in this country of reproductive age [and] is not just for mistresses of conservative congressmen."

Speaking of stridently anti-choice politicians who will never get pregnant themselves but think they have the right to make decisions for anyone who does, Mike Pence.

Pence has been on an anti-abortion crusade his entire career, and has specifically made Planned Parenthood his top target. He's already received beautiful comeuppance for it, when over 2,500 people donated to the organization in Pence's name for his birthday last June.

And actress Mila Kunis is doing her part each month to keep that well-deserved prank going.

"I disagreed with some of the stuff that Pence was doing and was trying to do," Kunis told late night host Conan O'Brien. "And so as a reminder that there are women out there in the world that may or may not agree with his platform, I put him on a list of recurring donations that are made in his name to Planned Parenthood."

Thus, every month, Pence gets a letter informing him of an anonymous donation made in his honor to support reproductive freedom.

"It's a peaceful protest," Kunis noted.

Indeed — and it's awesome.

Sisters are doin' it for themselves

It's not just your favorite '80s jukebox track — it's a new political reality.

We've seen the amazing numbers from EMILY's List — since the election, more than 20,000 women have contacted the organization to get information about or help with running for office.

But there's a lot more where that came from. As Mallory Simon and Kyung Lah at CNN put it, "Trump opened the floodgates" for Democratic women across the country to put their running shoes on.

Virginia Democratic Caucus Chair Charniele Herring called it "unprecedented" and "just the start" of something huge. And the numbers bear that out.

According to Simon and Lah, in addition to the EMILY's List reporting, more than 15,000 women have contacted She Should Run since the election, and Emerge America has seen an 87 percent increase in training applications.

And in a way, Trump helped make it happen.

"He fuels a conversation that there's no one path to the White House, there's no one background," said Erin Loos Cutraro, co-founder and CEO of She Should Run.

And of course, there is also the desire to push back against the damage that the Trump administration is trying to do, and to leave a better world for the next generation than they would get from his White House.

"For me, this was about my granddaughter and my children, but it was about everybody else's children as well," said Kimberly Anne Tucker, who at 52 years old decided to challenge a Republican incumbent in a very red district in Virginia.

"What kind of world are we going to leave for them?" she wondered.

If all of these women have anything to say about it, and they do, it'll be a far better one than what the Trump-emulating GOP is creating.

ACTION ALERT: Pledge to be a #HealthCareVoter

As Republicans are fighting to take away health care from millions of Americans, they need to know voters will hold them accountable if they do. Take the pledge to hold politicians accountable and stay up to date on how you can help fight back to protect health care.